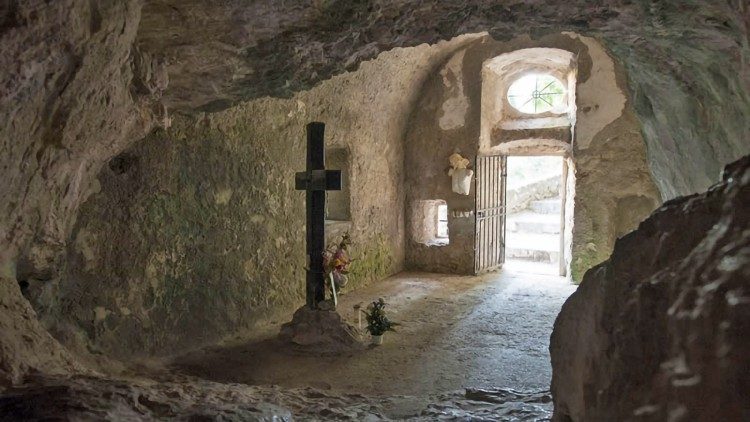 He loved the hermit life and chose Mount Morrone and the Maiella massif, in Abruzzo, to adhere fully to the Gospel. His example of him attracted several young people and gave birth to a religious congregation by adopting the rule of St. Benedict. To adhere to the constitutions were also female Benedictine monasteries, today the only ones to follow in the footsteps of Celestino V. The abbess of the monastery of San Basilio in L’Aquila: Forgiveness is her spiritual gift to the faithful

His name was Pietro Angelerio, the exact date of his birth is not known, but it is believed that he can be placed between 1209 and 1215. Several cities claim his birth, including Isernia and Sant’Angelo Limosano. His was a family of modest peasants, he was the penultimate of twelve children. Attracted by the austerities of monastic life, he decided to wear the Benedictine habit in the abbey of Santa Maria di Faifoli. In his early twenties he turned to a more hermit life, he chose the Maiella and stopped in a cave on Mount Palleno.

Hermit in the Maiella and on Mount Morrone

His presence and his example of life did not go unnoticed, many wanted to know him, talk to him, confess with him, and it was precisely the people who asked him to become a priest. Peter then began his iter studiorum in Fossacesia and then reached Rome, where around 1237 he was ordained a priest. To continue his hermit experience, he immediately moved to Mount Morrone, hence the name with which he was then called. He had a reputation for holiness, he was told of conversions, prodigies and healings. But Pietro preferred the solitary life and for this reason he returned to the Maiella, in search of increasingly inaccessible places in which to settle. Several young people began to imitate him and around him a community of hermits was born. Slowly the cenobitic organization grew and in 1264 Pietro established, with the approval of Urban IV, the Hermits of San Damiano, later called Celestine, who chose the Benedictine rule interpreted with great severity. At the head of the religious order he moved to various communities.

The meeting with Gregory X

In 1274, having learned that at the Council of Lyon they wanted to limit the new religious orders, fearing that the monastic order he founded would be suppressed, Peter decided to go to France. He was received by Gregory X who confirmed his congregation of him. In fact, the fame of holiness that accompanied him was great, so much so that the Pope asked him to celebrate a mass in front of all the council fathers. The religious family founded by the hermit monk came to count 36 communities, populated by about 600 monks and oblates. Pietro, however, always attracted by solitude, in 1284 withdrew, once again on the Maiella, but continued to receive those who wanted his advice.

The election to the papal throne

After Niccolò IV died in 1292, the Holy See remained vacant for 27 months. The college of cardinals, meeting in various locations in Rome, did not find an agreement on any candidate and following an epidemic of plague the conclave was dissolved. More than a year passed before he could reunite again. On 18 October 1293 he was summoned to Perugia. But in the meantime Pietro da Morrone had predicted “serious punishments” for the Church if its supreme pastor was not immediately chosen. So it was that his name circulated among the cardinals and since the hermit monk was a well-known figure and everyone spoke of him with great respect, the cardinals wanted to entrust him with the government of the Church and on July 5, 1294 they elected him Pope. A delegation was therefore sent. in the Maiella mountains to communicate the conclave’s decision to Morrone, already eighty. The latter, after having prayed for a long time, accepted and riding a donkey reached the city of L’Aquila, where he had summoned the Sacred College. And here, in the church of Santa Maria di Collemaggio, he was crowned Pope on 29 August 1294 with the name of Celestino V. For the occasion, the new Pope wanted the reconciliation of the city factions and ordered King Charles II of Anjou, who counted L’Aquila among its domains, to forgive the rebellious L’Aquila.

An image of Celestino V

The short pontificate and death

Among the first official acts of Celestino there was the so-called Bolla del Perdono, the Inter sanctorum solemnia of 29 September 1294, with which he granted the plenary indulgence to all those who confessed and repented of their sins had gone to Santa Maria di Collemaggio from vespers of 28 August to sunset on 29. Soon, however, unaware of Latin, fasting theological and juridical sciences, without political and diplomatic experience, Celestino realized that he was not up to the task that had been entrusted to him and after about 4 months from his coronation, on 13 December 1294, he decided to renounce the papacy. He explained to the cardinals gathered in a consistory that his choice was due “because of humility, of perfect life and preservation of conscience, of weakness of health and lack of science, to recover the peace and consolation of ancient life”. The new Pope was Boniface VIII, who fearing a schism by the cardinals opposed to him, ordered that Celestine be kept under control. The latter, wanting to return to his hermit life, tried to take refuge on the Morrone and then flee to Greece, but was reached in Vieste and was taken to Fumone, where he died on May 19, 1296. He was canonized in 1313 by Clement V.

Over the centuries, female Benedictine monasteries have been linked to the Congregation of the Celestines who have assumed their constitutions, but while the male religious order disappeared completely at the beginning of the 19th century, there are still cloistered ones that follow in the footsteps of Celestine V They are the celestine Benedictines. Among their monasteries is that of San Basilio in L’Aquila, founded in 1320, where a community of 8 religious lives. The old convent and its adjoining church, damaged by the 2009 earthquake, remained standing and, recently restored, can be admired again. The nuns, who also gave birth to two missions in Bangui, in the Central African Republic, and in Manila, in the Philippines, remained for 11 years in a container in their garden in order not to leave their historic monastery. The Celestine Benedictine nuns are the last heirs of Celestine V’s spirituality, which is expressed, explains the abbess, mother Margherita Santarelliin prayer, work, silence and meditation.

Listen to the interview with mother Margherita Santarelli

“San Celestino was poor and detached from everything, we try to give this example – adds the nun -. He had no ambitions, he even renounced the papacy and took up the habit of a monk ”. To contemporary man Celestino teaches detachment from the things of the world, the abbess of the San Basilio monastery tells us, the renunciation of material goods, wealth, honors. He teaches that we must first of all seek the Kingdom of Heaven. “For us consecrated it means choosing and following Christ, for today’s man not chasing power but seeking forgiveness, brotherly love and living detached from everything”. Mother Margherita also tells us of Celestine V’s particular bond with the Holy Spirit, of her gathering in prayer for advice, and of her concern for the Church. “He has always thought of the good of the Church, of the good of the faithful – she affirms – she. She also left the forgiveness he gave to L’Aquila for the people, to offer spiritual help. He did not think of leaving riches, but spiritual gifts “

The relics of Celestine V

The robes of Celestino V are kept in the monastery of San Basilio. The earthquake that hit L’Aquila in 2009 also damaged the Basilica of Collemaggio, where the remains of Pietro da Morrone were kept for centuries. Following the restructuring, the reconnaissance of the urn containing the remains of Celestine was also made, which was then dressed as Pope. The celestine nuns were given the planet, the miter, the slippers, the gloves, the pallium, which belonged to the monastery. But the nuns also keep the tunic, the scapular and the wax mask replaced by a new silver mask.

For the celestine Benedictine nuns the opening of the Celestinian forgiveness by Pope Francis is an opportunity to transmit the grace of forgiveness and love to the world. There is enthusiasm among the religious for the arrival of Francis on 28 August. The Pope will open the Holy Door in the Basilica of Collemaggio, giving way to the forgiveness of Celestine V, and “this Forgiveness will be strengthened by his presence”, inviting, once again, to reconciliation and brotherly love.