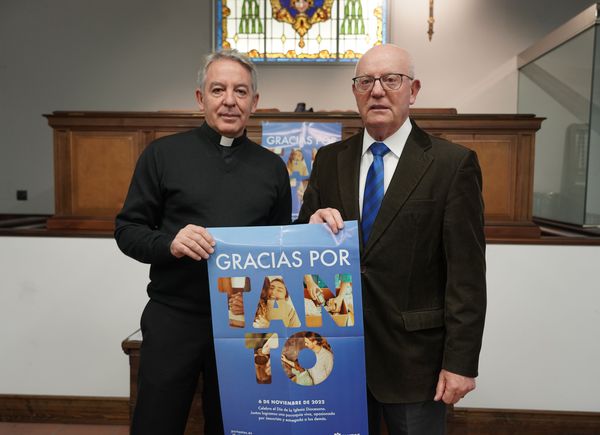 The end of restrictions due to the coronavirus health crisis has caused the faithful return to masses and religious services in churches and parishes. And, therefore, the collection obtained in the traditional collections in the ceremonies has also grown.

In the case of Diocese of Valladolid, For example, the increase in collections last year compared to 2020 has been 25.1 percent up to a total of €1.5 millionaccording to data provided this Friday by the Archbishopric of Valladolid and that are reflected in the 2021 Economic Report of the Diocese of Valladolid, headed by Meneses de Campos from Palencia since last summer. Luis Arguello.

Some data that, like every year, have been released on the eve of this Sunday, November 6, the celebration of the Diocesan Church Day, with which it is intended make the faithful aware of the importance of supporting the Church from the economic point of viewbut also for Show appreciation to everyone who collaborates.

After the contributions of the faithful, the main item of income of the Diocese of Valladolid during the past year has come from the tax allocation, that touched the four million euros.

While the building conservation and ecclesiastical functioning, with almost five million euros, ahead of the clergy paywhich amounted to 2.8 millionhave been the main expenses in the Diocese of Valladolid, as explained by the bursar, Jose Maria Condewho pointed out that at this time About 200 priests and fifteen laymen are on the payroll.

For all these reasons, the Archbishopric is pleased that, for yet another year, the balance of the accounts is positive, closing the 2021 financial year with revenues of 11.9 million and expenses of 10.8 million, which means a surplus of 1.1 million euros.

Towards a more sustainable Church

On the other hand, it should be noted that the need to save on energy costs (gas, diesel and electricity), but also the indication of Pope Francis in favor of a Church more respectful with the environment, has permeated the archbishopric of Valladolid, where renewable energies have been entrusted for a more sustainable management.

Thus, the Archbishopric of Valladolid will install photovoltaic panels in the facilities of the Diocesan Seminary and the Center for Spirituality, which will be medium-sized and oriented to self-consumption, both to “lower” costs and to enter into the perspective of technological conversion.

The price of every one of them ranges between 40,000 and 45,000 euros to produce cleaner and cheaper energy, according to the diocesan head of Patrimony, Jesus Garcia Gallowho was referring to the concept of “decarbonization of the economy” which suggests the encyclical ‘Laudato Si’, signed in 2015 by the pope and which leads the first verse of a song by Francis of Assisi to thank the Lord for the gifts of mother earth that sustains human beings.

To these installations of photovoltaic panels, another similar one is added within the province to heat the chapel of Saint John Paul II in the parish church of Simancas, paid for with their own means, adds the delegate.

“We are going to try to encourage all the parish priests to follow this direction”, García Gallo said, in statements collected by Efe, before clarifying that any renewal of heating systems using renewable energies will in no case affect buildings classified as historical and artistic heritage, but rather functional centers.