It still makes sense there spirituality today? In an increasingly hectic world, the ability to stop, to be silent and look for space in one contemplative dimensionit not only makes sense, it becomes source of well-being. Various scientific evidences link spirituality to well-being, to the best quality of life, to the same longevity.
There are those who have chosen to live immersed in a spiritual dimension: even today, ascesis, the practice of silence, prayer and meditation is a choice embraced by a significant number of people. They live everyday life, but they have found spaces and places to spend part of their lifein contact with nature, choosing to lead one monastic and hermit life, in contact with nature but anchored to everyday reality.

There are those who wanted tell some of the many stories in pictures of those who have decided to follow a certain type of life. A photographic book was released, entitled “Free Spirits”. She made it Paolo Bonafreelance photographer who works for newspapers and magazines, collaborating with some of the most important national and international agencies.
It was a book strongly desired by the author, who published it at his own expense (today it is present in the Hoepli catalog), but it is the result of a path that from an initial idea led him to deepen and investigate the dimension of spirituality through three different experiences: the Little Family of the Annunciation, founded by Giuseppe Dossetti (Italian politician and later priest and theologian); Simeon’s experience as a hermitage; the community of Romena, founded by Don Luigi Verdi.

Where did your project on spirituality come from?

At first I had thought of working on a project of historical memory, starting with Marzabotto and what this place represents. I wanted the stories to be united by the common context of the Apennines, an ideal place for my need to slow down. Once I have “breathed” the history and places of memory, immersed in a context of solitude, in contact with nature. Once there, touring that area I discovered the existence of Little Family of the Annunciationfounded by Giuseppe Dossetti who – among other things – was a partisan and one of the fathers of the Italian Constitution before embarking on a path of conversion that led him to become a monk.

When I first met this reality so rich in spirituality, as silent as it is vivid, and in memory I decided to give a different direction to my initial project and thus “Free Spirits” was born. I asked for and obtained permission to go to them to testify about their life. To do this, I approached “on tiptoe”, having the deepest respect for their contemplative dimension, adapting myself to their daily life, marked by prayer and its rhythms. So I was able to get accepted and grasp the meaning of their life more intimately. I believe that my personal and professional research have merged in this book, thus recounting spirituality through images. 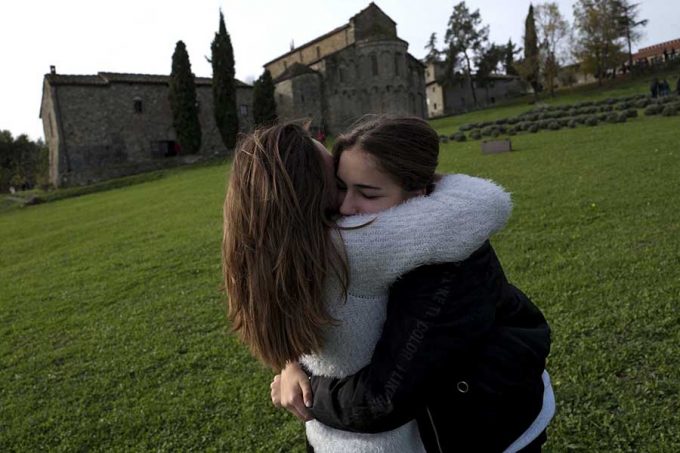 Image taken from the book “Spiriti Liberi” by Paolo Bona

What idea do you have, even after your work, of the value of spirituality?

I realized even more that it is a essential, primary value. It is that inner voice that is worth listening to and trying to bring out. My personal journey has seen me move away from religion in my youth and then gradually get closer, also on the occasion of my journey that led me and my wife to marriage. In recent years, I have perceived a growing need to investigate this dimension more deeply. The experience I lived to make this book of mine and the context, made up of silence, of contact with nature, reinforced this “inner resonance”.

How did you manage to make spirituality shine through in your book?

There are no prepackaged recipes. The primary condition is to forget the pressure associated with having to create an image, a photographic shot. The possibility of doing this job of mine without having particular conditions or timing within which to stay has facilitated everything. Certainly, personal involvement played an important role in bringing out spirituality. I learned from a sentence by a friar of the Fraternity of Romena, which I read when I went to them: “it is always a choice to take care of our gaze, to decide in what direction and with what attention to point our eyes”. This eye care it is a thought that I have internalized and carry with me from this experience and that I have made mine.

Another anecdote that I like to remember, in this regard is a term that Don Paolo Alliata (priest and writer, who edited the preface of the book) made me discover, giving me a book entitled “The Hesychasm“: This Greek term describes theancient practice of the simplicity of being. This search for existential simplicity it is the goal that spirituality spurs you to pursue.

The cover of the book “Spiriti Liberi” by Paolo Bona

There is scientific evidence that proves the link between spirituality, well-being and longevity. How do you explain it from your personal experience and experience?

Listening to this spiritual side of mine helps me feel better and be a better person. Even in the people I have met, and who are part of the book, they show this aspect well. However, those who think that the condition that monks, friars, hermits live, is one of complete bliss, of detachment from real life, is mistaken. They too experience difficult personal and existential moments, for various reasons. But spirituality is an important reading key to better face and live certain situationsis a help, a support to lean on to get out of difficult times.

In your book you bear the testimony of three different experiences of living spirituality: what is the common trait that unites them?

The freedom to express their spirituality. It is no coincidence that the title of the book is Free Spirits: each of them live this dimension without having to submit to constraints of any kind. Yes, they face the day with pre-established rhythms, but the condition in which they live their relationship with God and with their neighbor is totally personal and also enriching for this reason.
They are all individuals who live the experience of everyday life, but their spiritual dimension is a form of energy that they release and gives them strength, sharing it with those they meet.

Their relationship with everyday life manifests itself in many ways and examples: the Little Family of the Annunciation is open to the laity, so that everyone – religious and not – can come into contact with this experience of theirs. One of the members also served as chaplain at the Bologna prison. This is just one example that testifies to their bond. Even the hermit Simeone, in order to support himself financially, works as a pilates teacher and among other things he combines a physical activity (in addition to practicing running as an amateur). Also from here the spirituality, living every moment fully and giving it meaning and value.

Paolo Bona: spirituality is a current and beneficial dimension