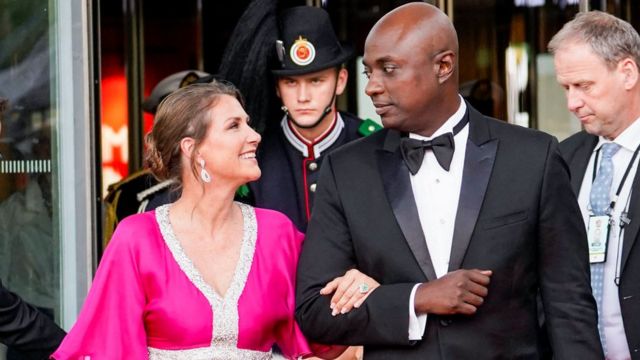 Princess Martha Louise of Norway has resigned from her royal duties to focus on the alternative medicine business she runs with her fiancé, a self-proclaimed shaman.

Although she will keep her title, the fourth in line to the throne of the European country sets aside her official duties to “create a clearer dividing line” between her private and public role.

Her fiancé, Durek Verrett, has promoted unscientific medical practices, suggesting among other things that cancer is a choice.

Marta Luisa gave up her “patronage role” as she and Verrett seek to clearly separate their activities and those of the Royal House of Norway, the palace explained in a statement.

They added that Marta Luisa keep your title by decision of the Norwegian king Harald V.

“She fulfilled her duties with warmth, dedication and deep commitment,” the statement said.

Following the announcement, the king described Verrett as “a great guy” and assured that “it is very fun to be with him”.

“He has a great sense of humor and we laugh a lot, even in this difficult time. I think both we and he have gained a better understanding of what is going on and have agreed to disagree,” Harald V told Norwegian journalists.

In her own statement, Princess Marta Luisa said she was “aware of the importance of knowledge based on research”, but stated that alternative medicine can be “an important complement to help the conventional medical system”.

He added that it was important to distinguish oneself “as a private person on the one hand and as a member of the Royal Family on the other.”

Years of criticism and accusations

The 51-year-old princess has stirred controversy in Norway for decades for promoting alternative treatments, including setting up a school to help people “get in touch with your angels“.

She has also been accused of using her royal title to gain a competitive advantage in her private activities.

In 2002 she married the Norwegian writer and artist Ari Behn, with whom she had three daughters. They divorced in 2017 and Behn, who suffered from depression, committed suicide on Christmas Day 2019.

In June, the princess became engaged to Verrett. She had announced the relationship in a 2019 Instagram post, anticipating potential criticism.

In the post, he stated, “For those who feel the need to criticize: hold back. It’s not up to you to choose for me or judge me. Shaman Durek is simply a man I love to spend time with and who fills me up.”

Despite that publication, the couple was the subject of intense criticism in Norway, and Verrett has been described on numerous occasions as a “charlatan”, a swindler and a conspiracy theorist.

Former Norwegian Prime Minister Erna Solberg described his views as “very strange” and “not based on fact”, adding that his ideas promote conspiracy theories.

The “visionary” who claims to have risen

Durek Verrett, an African American who describes himself as a “sixth generation shaman”, claimed to have risen from the dead and having predicted the 9/11 attacks on the United States two years before they happened.

He has attributed the criticism he receives to his skin color and has assured that “he had never suffered so much racism” as when he arrived in Norway.

Also has been compared to Albert Einstein and Thomas Edisonof whom he highlighted that they were “geniuses” and “misunderstood”.

On his website, he describes himself as a “‘Now Age’ visionary” who “demystifies spirituality.” He claims that his work influenced actresses Gwyneth Paltrow and Nina Dobrev.

According to a survey published in September, only 13% of Norwegians considered Princess Marta Luisa fit to represent the royal family at official events.

“I think that, rather than the princess as a person, it is more about the occult phenomenon with which she has been associated,” a royal biographer told Norwegian media.

Now you can receive notifications from BBC World. Download the new version of our app and activate it so you don’t miss out on our best content.