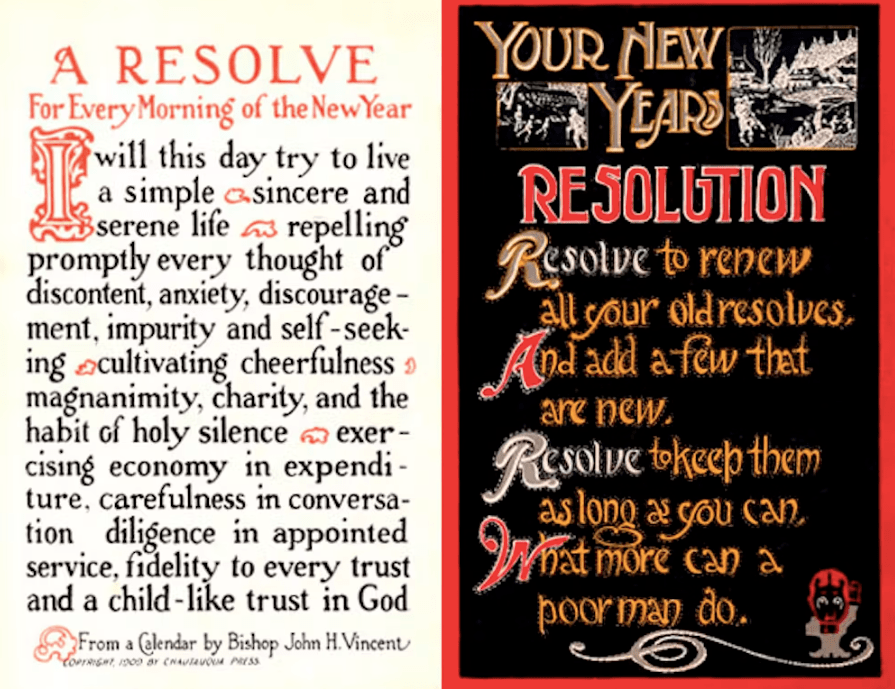 These New Year’s resolutions are actually nothing new: most ancient cultures had a religious holiday or some form of tradition to mark the start of the new year.

Historically, the Babylonians, around 4,000 years ago, were the first to make new year commitments (which would later become resolutions).

During this festival, people planted and sowed, pledged allegiance to the king in place or crowned a new king, and promised to repay their debts during the following year. The Babylonians believed that if they fulfilled their New Year’s promises, the gods would grant them favors in the New Year.

Ancient Rome carried on the tradition of celebrating the New Year and making pledges that went with it. The Roman New Year was originally celebrated on March 15 (the Ides of March), because it was on this date that the most important Roman officials (the consuls) took office.

The feast of Anna Perenna, goddess of the new year and the beginning of spring, was also celebrated on March 15.

With the Julian calendar, introduced by Emperor Julius Caesar in 46 BC. J.-C., January 1st becomes the beginning of the new year. This new date made it possible to honor the Roman god Janus.

Symbolically, Janus has two faces, one looking back, to the previous year, and the other looking forward, to the new year. Janus was the protector of doors, arches, thresholds and transitions to new beginnings.

To celebrate the new year, the Romans offered sacrifices to Janus and promised to renew the bonds between citizens, the state and the deities. Blessings and gifts were exchanged (eg fruit and honey), and pledged allegiances to the emperor. New Year celebrations and pledges were rooted in the spirituality, power structures, and social fabric of Roman culture.

In the Middle Ages (c. 500-1500), knights took an oath of allegiance and renewed their knightly vows each year.

According to legend, the most famous chivalric vows were “The Peacock Wishes” or the “Pheasant Wishes”: the knights laid their hands on a live or roasted peacock and renewed their vows to uphold the values ​​of chivalry.

To solve the problems related to the Julian calendar, the Gregorian calendar was introduced by Pope Gregory XIII in 1582. The new year was then officially restored to January 1.

Religion continued to exert a significant social and cultural influence on the purposes and function of New Year’s greetings. For example, in the 19th century, Protestantism emphasized promises strongly tied to religion, spirituality, and to morality.

However, by the 1800s there was some evidence that the resolutions were beginning to be scoffed at. For example, a series of satirical resolutions were reported in Walker’s Hibernian Magazine (1802), with for example the following pike: “Statesmen resolved to have no other object in view but the good of their country “.

As resolutions became commonplace, people made and broke commitments as they still do today. For example, as early as 1671, the Scottish author Anne Halkett wrote in her diary the following resolution: “I will offend no one any more.”

As before, people in all cultures continue to celebrate the New Year (albeit at different times) and make resolutions. Just as ancient civilizations prayed for rich harvests, those who make resolutions today tend to project societal values ​​into them.