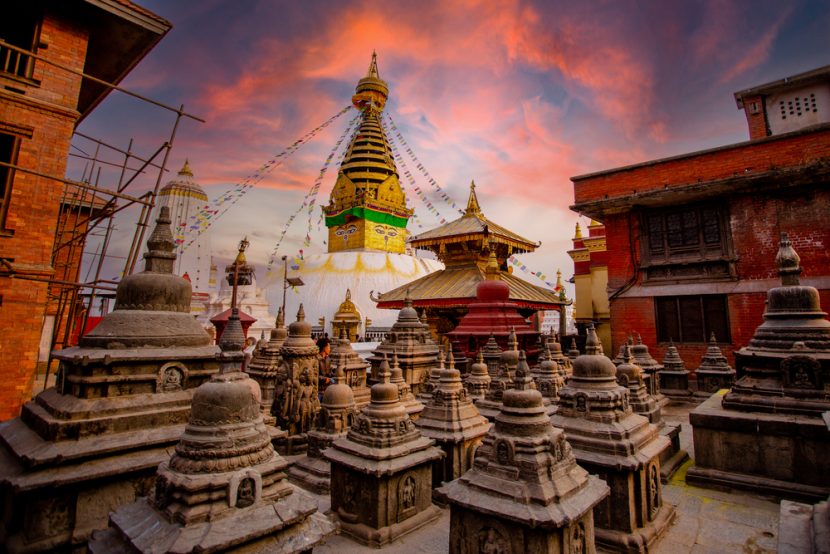 Nestled between India and Tibet, the Nepal it contains incredible mountain landscapes and a unique load of cultural suggestions.

On its small territory they concentrate seven of the ten highest mountains in the worldor, some of the best hiking and mountain climbing like famous Annapurna trek, Everest base camp trek and many more trails in Himalayas, birthplace of Buddha, sultry plains, lots of wildlife to observe, the remnants of a glorious old empire and the winding streets of the capital Kathmandu, a bustling metropolis with deep ties to history, religion and spirituality.

With a natural landscape that ranges from dense jungle to snow-capped peaks in just a few kilometres, Nepal can boast a wide range of natural and cultural treasures for a journey full of adventure, sporting activities and knowledge of ancient traditions full of charm to closely observe the deep connection of the locals with their roots and experience an essential part of the trip to nepal.

Ever since Nepal opened its borders to foreign travellers, it has quickly become a sought-after destination for trekkers and travelers of all types due to its breathtaking natural beauty, historical attractions, national cultural heritage sites, elements capable to create the right blend of ancient and contemporary life, slow pace and frenetic city life.

Nepal has a great eco-diversity with many natural treasures to discover for every level of difficulty and adventure, the first entry on the list of the most popular activities in the country is that of trekking in the Himalayas, of discovering Buddhist monasteries such as Tengboche and pilgrimage sites such as Lumbini or at the many UNESCO World Heritage Sites.

There are also many opportunities to visit large national parks, to practice adventurous sports immersed in its landscape such as kayaking, bungee jumping, paragliding and mountain biking around the splendid lakes of Pokhara, the second largest city in the country and starting point for famous high altitude trek on the Annapurna Circuit.

Nepal, what to see and when to go

When to go to Nepal?

The low season is the quietest and least crowded because it coincides with the monsoon season.

Conversely the peak season of tourists with trekkers from all over the world flocking to the trails ascending Everest and Annapurna from April to May are considered the peak time to go.

Where to go in Nepal

The trip to Nepal starts from its exotic capital Kathmanduin the medieval maze of its alleys amidst the electrifying atmosphere of its markets or in the most famous Hindu temples and Buddhist stupas such as Pashupatinath temple, Boudhanath, Kopan monastery, Dakshin Kali temple, Durbar square and Thamel area.

The bustling city is a great home base for visiting the surrounding Kathmandu Valley, the well-preserved medieval cities of Patan, known for its magnificent temples nestled on the banks of the Bagmati River, and Bhaktapur where you can find temple wood carvings and handicrafts pottery and pottery at local markets, mountain viewpoints like Nagarkot, in the Central Hills and push on the road to the border with Tibet or along the winding Tribhuwan Rajpath to India.

West of Kathmandu is located Pokharaa charming and tranquil resort town set beside a lake and below an imposing wall of scenic white peaks, an ideal base for day hikes and mountain bike tours, yoga and meditation classes and even paragliding and microlight flights.

Other towns in the western hills offer history, culture as well as landscapes, especially Gorkha with its imposing fortress, Manakamana with its wish-fulfilling temple and Bandipur with its old-world bazaar, while in the western part of the Terai Lumbinithe birthplace of the Buddha, is a world-class pilgrimage site, as well as Janakpura Hindu holy city in the east.

Along the border with India are the popular Chitwan National Park with its endangered Asiatic one-horned rhinoceros, Bardia National Park and two other wildlife reserves

Nepal is one of the world’s homelands for trekking with village treks, through towering hills, lush forests, rural settlements up to the peaks and glaciers of thehigh Himalayasoffering a combination of floral and wildlife beauty along with the lifestyle of the local people.

The regions ofAnnapurna and Everestincredibly beautiful and culturally rich, are most geared towards hikers, but other once remote areas are opening up, notably Mustang and Manaslu, while for a different perspective on the countryside and wildlife there is no shortage of white water rafting and mountain biking opportunities along the rivers of Nepal.

Nepal counts many different regions for trekking. These regions include the famous Everest Base Camp Trek, the great Annapurna Circuit Trek and the Mardi Himal Trek. But also short treks at Poon Hill and off the beaten track treks at Khopra Danda, the great Himalayan trails from Humla and Darchula in the west to Kanchenjunga in the east.

Each itinerary indicates the level of difficulty and the amount of days needed to complete it. The different altitude of the trek is the main attribute of Nepal; the lowest measured point in Nepal is 59m above sea level to the mighty Himalayas at 8848m.

Taking a village tour in Nepal broadens the chance to see the beauty and cultural tradition along with the ethnic lifestyle of the Nepalese people.

The culture, customs and practices in the villages are not contaminated by Western society and more than 75% of the total population of Nepal lives in villages and predominantly agricultural rural settlements.

Nepal’s cultural landscape is as diverse as its geophysical one. Its peoples belong to a myriad of distinct ethnic groups and speak different languages.

Nepal’s ethnic culture is equally diverse with around 126 castes, each with its own unique history, some dating back hundreds of years. Hinduism and Buddhism are the two main religions practiced and this is also why Nepal is a popular pilgrimage destination for Hindus, also, this being the birthplace of Gautama Buddha, Buddhism plays an important role in the country which however it has become a multicultural, multiethnic, multilingual and multireligious nation.

Nepal is a country that has been shaped by religion and beliefs since ancient times with a history deeply connected with religious beliefs and incidents which is why Nepal offers an amazing pilgrimage experience.

Hindu followers from all over the world visit Nepal to worship in Pashupatinath Temple one of the biggest Shiva Mela, Muktinath Temple, Guhyeshwari Temple, Pathivara Temple, Dakshinkali Temple, Manakamana Temple and many other religious shrines.

This is a country with deep national or ethnic pride, an extraordinary knack for partying and pageantry, and a strong attachment to tradition.

Its cultural diversity has made Nepal a country of many popular festivals and celebrations with a busy calendar of traditional festivals such as the spring festival of Holi where people are sprinkled with paint, the Tibetan New Year, the festa of the light of Tihar and the endless festival of Dashain in addition to those of kumari jatra, Indra Jatra, Rato Machhindranath jatra, Shivaratri, Gaijatra and many others in which people of various religious faiths participate in mutual respect and tolerance.

Nepal: what to see and when to go

Father Guglielmo Camera: a life in and for the mission
Segesta Teatro Festival: the latest appointments between music, theater, entertainment.
Russia's invasion of Ukraine has aggravated the problems of the Bolivian economy
Tweet
Share
Share
Pin