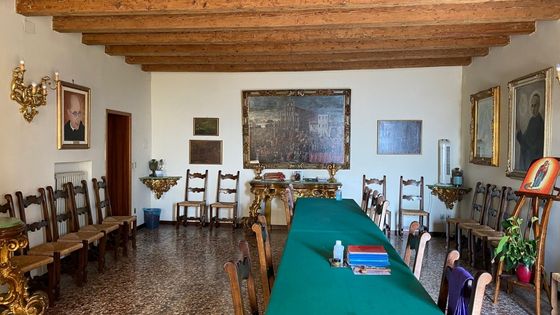 On the occasion of the feast of the Madonna di Monte Berico, the community of the Servants of Mary has regenerated various rooms of the convent with a series of works of artistic and devotional value, creating a continuous itinerary of beauty and contemplation, to be shared in some programmed moments with pilgrims and visitors through guided tours scheduled on 10 and 24 September at 4 pm, by reservation.

The initiative “Monte Berico: the convent is dressed in bbeauty ” it was presented by the mayor, the prior of the Venetian Province of the Order of the Servants of Mary, the director and the art historian and scientific curator of the Museum of the Sanctuary of Monte Berico.

“A few days before the celebrations in honor of the Madonna di Monte Berico, patron saint of the city of Vicenza, right in the place of worship particularly loved by the faithful, an unprecedented opportunity to get to know places hitherto hidden from the public is offered – said the mayor -. Suggestive spaces – the convent with the Chapter cloister – which can now be visited and which have been rearranged with works of art. An opportunity that I am sure will be appreciated and that I hope will pave the way for subsequent itineraries ”.

“For the first time the ancient cloister of the Chapter, the beating heart of the convent of the Servi di Maria di Monte Berico, welcomes on its walls, adjacent to the original Gothic church, an important collection of sacred art, especially pictorial, imbued with profound spirituality – underlined the prior of the Venetian Province of the Order of the Servants of Mary -. Of great historical and documentary as well as aesthetic value, these works are a splendid testimony of the interest and care for beauty that has characterized the Order of the Servants of Mary, born in Florence in 1233 since its origins.

The works placed are part of the significant patrimony of the Order of the Servants of Mary, which over the centuries has devoted great attention to artistic expression not only as a client, but also actively cultivating in the convents and monasteries multiple forms of creativity linked to the street. pulchritudinis, thanks to the religious often endowed with remarkable talent and technical ability, as evidenced by the recent case of Fra ‘Fiorenzo Gobbo (1926-2014), one of the most interesting protagonists of sacred art in the twentieth century, of whom they preserve various graphic and pictorial works.

The most evocative environment redesigned in this situation is the so-called “internal cloister”, on the first floor of the fifteenth-century convent, which with a “fenestella” overlooks the basilica, originally conceived to allow the sick friars to participate in the celebrations, without having to going up or down stairs.

In this wide-ranging “peripatetic” environment, the true heart of cloistered life, there are now works of great historical and artistic interest dating from the fourteenth to the eighteenth century, including three fourteenth-century fresco fragments attributed to Turone di Maxio, coming from the Veronese convent of Santa Maria della Scala, guarded for many centuries by the Servants of Mary. One of the adjoining rooms was created in a museum to illustrate the layout of a monks’ cell, with a panoramic view towards the “Valley of Silence”.

Also of great importance is the counterpart of the Baroque period paintings dedicated to the story of King David, Saul tries to kill David by throwing a spear at him (1Sam 18, 8-11) and David learns of Saul’s death from the Amalecite (2Sam 1, 2-11), together with the Sacrifice of Solomon (2Ch 7, 1-2 and 1Ki 8, 62-64) and coming from the monastery of Carpenedo and in temporary storage at the Vicenza convent.

Guided tours with the curators Father Roberto Cocco and Agata Keran, for a maximum of 30 people, are scheduled Saturday 10 and 24 September at 4pm (on reservation).

ATTENTION: The news refers to the publication date indicated above. The information contained may therefore undergo changes over time, not recorded on this page, but in subsequent communications.

“Monte Berico: the convent is dressed in beauty”