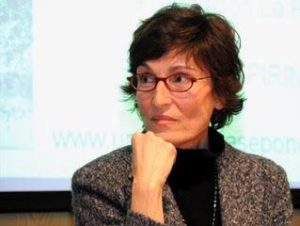 The Huesca psychiatrist Mercedes Nasarre will give next Tuesday 8 in the Assembly Hall of the Official College of Physicians of Huesca starting at 7:00 p.m. the conference ‘The epidemic of discouragement’, which will serve to present the School of Spirituality. A free space that emerged fifteen years ago in a church in Huesca where mindfulness was practiced and which is currently being developed in a Bishopric premises, and which regularly brings together 70 people to remain silent and share concerns. According to Dr. Nasarrese, it is a “space to unite psychological and spiritual knowledge. Without inner peace there is no capacity to reason or decide, and one is not a healthy human being without thinking for oneself and without relating to others”.

The conference that the psychiatrist will give wants to show the bleak panorama that Spanish society is experiencing, affected by various mental pathologies and that has made us the country in the world where the most anxiolytics are consumed and where the intake of antidepressants has multiplied by four. A more delicate situation among minors, since half of the young people between 13 and 17 years old considered, already in 2019, that they had mental problems, according to state sources. In addition, addictions, self-harm, eating problems, sexual promiscuity and suicide attempts have increased, which is the leading cause of death among young people (almost 800,000 people commit suicide a year in the world), explains Dr. Nasarre , who points out that 75% of mental health problems begin before the age of 18. “Care in child-juvenile psychiatry has increased. There is a bad foundation at the cultural and individual level. What’s going on in the West?” she wonders.

In his opinion, mental problems have become “sociodependent”, especially with social networks that serve as a catalyst for this situation that we are experiencing at the beginning of the 21st century. “There is a general contagion of bad ways of living at lightning speed, not to mention all the problems with sexuality and gender identity (cases of gender transition in girls have increased in consultations by 1,500%, according to Scandinavian medical statistics that can be extrapolated to Europe)”, he points out.

For Nasarre, faced with the dilemma of “what is permitted and what is prohibited” of past generations, today’s young people face another polarity: “the possible and the impossible. Emotion and desire come first and if I don’t get what I want I’m a failure. The male and female references in social networks are impossible to reach (handsome, rich and socially successful) and that creates frustration. We have educated our young people to avoid frustration and life is always frustrating.

Faced with this drift of society and without consistent adult models, the School of Spirituality proposes to “look within. Where there is a numinous center to take root, the pathology itself is less virulent,” says Dr. Nasarre, who insists that “medicalizing life is not the solution.” “Spirituality begins when one looks inside. Mental health is having enough peace to be able to reason and decide your life. That is the message that we launch from the School of Spirituality: how to find deep spaces of peace to be able to decide”, she points out.

The School of Spirituality uses Christian symbols “because we come from a Christian society and we all know them.” “Jesus Christ universal heritage, just as Buddha can be, is the quintessential human model of mercy, freedom and justice. The human being is a being in permanent evolution, we are made for evolution and fulfillment and on that path we find figures like Jesus”. Dr. Nasarre considers that the figure of Jesus Christ is a universal archetype and through it the path to oneself is found. “We become human with the other, and in a society as individualistic as the one we live in, we have to return to the other,” she says. And in that sense, she explains that in the School of Spirituality the practice consists of “making silence and then sharing with everyone”.

His presentation is aimed especially at young doctors to guide a part of society that suffers from mental problems towards better treatment. “Are we blind leading the blind? Or we also have to work on being good role models for others, because as mental health professionals, I think we have to work on our own interiority. In a psychotherapy, the key is who is the therapist, what influence do you give to the patient”, she emphasizes.

In this regard, the veteran psychiatrist calls on the new doctors to ask themselves if “is it enough to have human genetics to be a human being? The rest of the living beings are satisfied with their genome, not the human being. A human being is his genome of course. It is a body and its physical occurrence. It’s a biography. Parental relationships that shape the psyche and model the brain. It is a time, a country, a community… A human being becomes culturally human because he acquires a language, a formative culture”.

And with respect to society in general, he considers that the mental health of a population “cannot be charged to professionals, it depends on economic factors, cohesion and social order and, above all, it depends on cultures that help the integral development of individuals. intellectual, moral and spiritual.

Mercedes Nasarre: “Medicalizing life is not the solution”