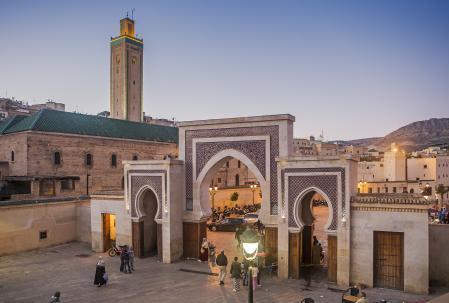 The city of Fez, considered the cultural and religious center of the country, has its genesis in a mysterious and immense medina founded by Idris I in the year 789, which is also called Fez-El Bali. This labyrinth overflowing with life and color, exudes spirituality and tradition in every corner, offers a human and architectural landscape that interprets an incomparable symphony of stimuli, which captivates every traveler who sets foot in it.

To access the medina there are numerous gates. The most emblematic, due to their monumentality and profuse ornamentation, are Bab Bujelud and Bab R’Cif. We will enter through Bab Bujelud, which gives access to a square full of terraces where you can enjoy a classic Moroccan tea (tea with mint and a lot of sugar). The moment you enter the medina, you should be aware that you are entering a living museum with more than 300 neighborhoods and half a million inhabitants, declared a World Heritage Site in 1981, with a frenetic commercial and human movement that has not stopped for a long time. twelve centuries, in an intricate labyrinth of streets where getting lost is inevitable, but a real pleasure.

The shopkeepers invite you to enter their shops, the tireless guides offer their services, the smell of roast meat mixes with the sweetness that permeates the air with honey, donkeys carrying heavy loads make their way through the crowd through narrow streets, are some of the stimuli that make up the cocktail of impacts that I receive when walking through the tortuous urban layout drawn by the streets, squares and passages of the medina. Where, despite the apparent chaos that reigns, it is perfectly organized in neighborhoods and guilds.

Around Tala Kebira, the longest street in the medina, there are almost all the most interesting visits: like the Bou Inania madrasa, with hypnotic ornamentation; the charming Nejjarim Square, which houses the carpenters’ souk; the tomb of Moulay Idriss II, always with a continuous movement of believers who come to ask for favors; or the Seffarine square, which houses the brass souk, where craftsmen make huge cauldrons and precious lamps.

At the end of Tala Kebira you will find Qarawiyyin. It is the most brilliant architectural work in the medina. Non-Muslims will have to settle for sticking their heads out of one of the fourteen doors it has, since the entrance is forbidden to infidels. From the front door I can see a wonderful courtyard with a fountain in its center, where people perform ablutions.

The Qarawiyyin complex is a mosque-university, which is made up of sixteen naves and three madrasahs that have a capacity for twenty thousand people. The result is the result of multiple extensions, the most significant being those carried out during the 10th and 12th centuries. Qarawiyyin, in times of Al Andalus, was the center of Islamic learning in the West, maintaining strong ties of intellectual exchange with Damascus and Cordoba.

The Qarawiyyin complex is a mosque-university made up of 16 naves and three madrasahs with capacity for 20,000 people

One of the most attractive locations in the medina, despite the bad stench it gives off, are the tanneries; where artisans tan, dye and work the skins. Of the three in Fez-El Bali, I prefer to visit the so-called Chouwara; There are always people working and it is guaranteed to see all the processes that the skin undergoes in its transformation until it is ready to be used to make consumer goods.

To enter this enclosure is to travel to the Middle Ages. In it there are hundreds of skins spread out on roofs and walls, so that the sun dries them after being treated. I the floor is perforated, configuring a multicolored mosaic of hundreds of open-air vats with very diverse liquids, which provide a fascinating range of colors, where masters and apprentices work the skin as their ancestors did.

I am very tired and lost, without energy to get out of this swarm of streets. But I do have very clear where I want to go; to end this busy walk through the medina with a flourish. Nothing like dining at sunset in one of the terrace restaurants next to the Bab Boujeloud gate. Given the disorientation that I suffer, I decide to decline the course in the hands of a spontaneous guide, who for a few dirhams gets us to appear in front of the La Kasbah restaurant in a few minutes. Its comfortable terrace offers a wonderful view of La Puerta Azul and the jumble of roofs that make up Fez-El Bali.

The pleasure generated by eating a delicious couscous while contemplating the amber tone that stains the motley medina with the last moments of the afternoon is indescribable. A fabulous spectacle, which acquires the category of intangible beauty with the call to prayer, simultaneously and in unison, of the numerous muezzins of the city announcing the end of the day.

Medina of Fez, the magical labyrinth in which getting lost is a pleasure