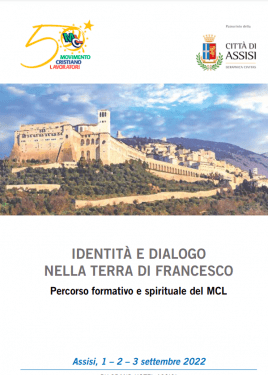 “As the 50th anniversary of the foundation approaches, we want to reaffirm our identity as an ecclesial, social and popular movement with a pilgrimage to Assisi. The three days in the Land of Francis, with the convocation of the national and territorial leaders of the Mcl, we intend to confirm our belonging to the Church and the reasons for our commitment to evangelical witness organized in the world of work, in the wake of the magisterium of Pope Francis, focusing on on the great urgencies of peace and the custody of creation ”. These are the words of Antonio Di Matteo, president of the Christian Workers’ Movement, who presents in the press release the meeting that will see the meeting of the General Council as the first appointment scheduled for Thursday, the intervention of Msgr. Francesco Antonio Soddu, bishop of Terni-Narni-Amelia and president of the Umbrian Episcopal Commission for social and labor problems, justice and peace and the protection of creation, and greetings from Stefania Proietti, mayor of Assisi, and Donatella Tesei, president of the Umbria Region. Following speeches by Gianfranco Costa, president of the International Center for Peace among Peoples of Assisi, and Ermanno Ventura, Umbrian regional president of the Mcl.
At the end of the Mass presided over by Msgr. Domenico Sorrentino, bishop of Assisi – Nocera Umbra – Gualdo Tadino. Friday will begin in the cathedral of San Ruffino with the reflection on “Care of the common home and fraternity in the land of Francis” for which, moderated by the director of the diocesan office of social communications, Marina Rosati, will intervene: Piero Damosso, editor-in-chief of Tg1 Rai, father Enzo Fortunato, journalist and writer, and Marco Tarquinio, director of Avvenire. In the afternoon mass at the Porziuncola, presided over by Msgr. Luigi Renna, bishop of Catania and president of the Commission for social and labor problems, justice and peace and protection of creation of the Italian Bishops’ Conference. In the evening, the torchlight procession for peace, from the Domus Pacis to the basilica of Santa Maria degli Angeli, led by Don Bruno Bignami, director of the National Office for Social Problems and Work, with the reading of the message for peace at the end. Mass presided over by card. Matteo Zuppi, president of the CEI and bishop of Bologna, followed by a pilgrimage to the places of San Francesco and Santa Chiara led by the ecclesial assistant Don Francesco Poli. “This meeting of ours, which we will live in communion with the Church in Italy, comes at an extremely delicate moment from an economic, social and political point of view in Italy and in the world, by people open to hope, however, animated by the spirit of service to which the Holy Father always reminds us, we want to offer our prayers and our work to the demand for peace and justice for humanity ”, concludes the president of Mcl Di Matteo.

Mcl: Assisi, from 1 to 3 September the three days of formation and spirituality to prepare for the 50th anniversary of the foundation | AgenSIR