It used to go without saying that a family should dedicate a special time to prayer at the beginning and at the end of the day. Today all this is by no means taken for granted, and in some ways this, as well as a difficulty, is also a possibility …

We are happy to publish online the contribution of Maurizio Chiodi proposed during a spirituality meeting dedicated to the families of the “La Pietra Scartata” Association and the Ai.Bi. Amici dei Bambini and reprized in issue no. 12 of the semi-annual magazine “Lemà sabactàni? – contributions for a culture of hospitality“.

The notes proposed by Fr Maurizio Chiodi – professor of moral theology at the Pontifical Institute “John Paul II” in Rome and the Theological Faculty of Northern Italy in Milan, author of the book Drama, gift, welcome. Anthropology and theology of adoption (Edizioni San Paolo, 2020), inspirer of the La Pietra Scartata Association and its first Spiritual Advisor, as well as editorial director of the magazine “Lemà Sabactàni?”- their sole purpose is to favor and invite every Christian family to live the ‘extraordinary’ experience of prayer.

With prayer, it is certainly not a question of burdening families with further duties, burdens to bear or obligations to observe. On the contrary – observes Chiodi – «prayer is upstream and downstream of the gift of the Spirit: ‘upstream’, because it is like a place that prepares space and time to welcome the Breath of God, who gives us himself, and ‘downstream’ because it is the fruit of this grace that slowly shapes and transforms our life, making us the image of the Son who is the image of the Father“, As the apostle Paul says”and all of us, with our faces uncovered, reflecting the glory of the Lord as in a mirror, are transformed into that same image, from glory to glory, according to the action of the Spirit of the Lord“(2 Cor 3:18).

The seven stages in which the text is proposed and which will mark the precious reflection of Fr Maurizio Chiodi, highlight the original and constitutive relationship between prayer and faith, the family as a ‘place’ of prayer and a privileged form of education to the faith, the resistances and objections that stand in the way of those who want to introduce themselves to prayer, the link between family and Christian community, the concrete forms of prayer. 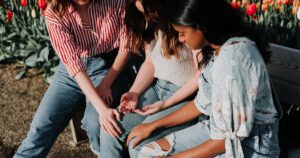 As for the timing, I believe it is urgent today need to make up for fixed times for prayer, also to distinguish them from other times in life. You don’t always have to pray. But there is a time when it is beautiful and it is necessary to pray. This time must be chosen. Without this time we cannot live. How can you not live without praying.

Here I propose some considerations that apply above all to personal prayer, but also to that of a couple, with the appropriate variations, in one or the other case.

It used to go without saying that in a family he would dedicate himself at the beginning and at the end of the day a special time for prayer. This could also be said personally, but it established a kind of horizon within which all the activity was inscribed, in a positive and enriching way. In the morning he thanked himself, and gave himself the time of the day. In the evening, above all, we examined ourselves on the time spent. Today all this is by no means taken for granted, and in some ways this, as well as a difficulty, is also a possibility. It is the times of work and the many other commitments, often television, or hurry or trouble, that establish the rhythms and times of life. This is a serious mistake: it is letting oneself live, without ever choosing. Concretely necessary instead make choices, and find times, perhaps starting with a possibility, the one most ‘at hand’.

Evening prayer, perhaps, is the easiest to accomplish. However, this too does not go without difficulty. In order to achieve it, it is necessary to make choices: turn off the television, and not only do it Why please, but because that time is own of the small family community, and of no one else.

It is more difficult to pray in the morning. Sleep, delays, slowness, little desire and various resistances, in adults and children, seem to make it an arduous if not impossible task even just groped to do a morning family prayer together. However, it is not impossible to give oneself a fixed time, in which everyone, or at least most of the family members, can be present. Maybe before having breakfast together or on the doorstep before the first of the family leaves.

Another occasion is prayer before and after meals. The meaning of prayer around the table is above all that of thank together, thus making clear the fraternity that one experiences when one eats at the same table with someone. At the same time in prayer the family thanks for this food, recognizing that it is at the same time the fruit of Earththat is, free gift of God, and of work of man and that is of our tiring and laborious commitment. This ‘sense’ obviously does not require great sermons or speeches. It should simply be posed by waiting for the time when it will be possible to explicitly tell the children as well. In this way the time of prayer becomes a revelator of the very meaning of life, which is praise and thanksgiving, an invocation for help and forgiveness, an invitation to the commitment of witness.

Particular importance, in the scanning of the times of the day, has the prayer of the Hours: there Liturgy of the Hours. It is an extraordinary prayer, punctuated by the time of the day. Of course, in a monastic community, the Liturgy of the Hours is a fundamental point of reference, around which the whole day ‘revolves’, as if around its own center of gravity.

For us, on the other hand, who live in the ‘century’ – all the more so in a secularized and post-secular society – in some respects it is a question of doing the opposite. We have to indeed inscribe the times of prayer in the rhythms of everyday life: times of work, family, social and ecclesial commitments, entertainment and rest. However, in other respects the Liturgy of the Hours also asks us to respect the times it marks and therefore demands that our time ‘revolve’ around the time of prayer: praise in the morning, vespers in the evening, the average hour during the day, compline before rest, the office of readings in the morning or during the day.

The Liturgy of the Hours is essentially structured on psalmodic prayer. The psalms are the prayer of the biblical man, they are (were) the prayer of Jesus, they are the prayer of the Church. However, they are not an easy prayer, given their ‘distance’ in time and culture, and therefore require a gradual journey. They are a prayer that must be chosen with progression and with discernment, so as not to waste it.

The Liturgy of the Hours is a prayer that requires the ability to understand the psalms, in their variety and richness. To better enjoy and savor them, it may be necessary to let yourself be helped by some good books: see for example Apostolic Constitution “Laudis canticum»(1/11/1970), by Paul VI; the text – more demanding – by P. Beauchamp, The psalms night and day (Cittadella, Assisi 2002, orig. 1980, with presentation by E. Bianchi and introduction by G. Ravasi), The psalmsAncora, Milan 1987, and more recently, by the same author, A journey inside the psalmsCittadella, Assisi 2009, and many others …