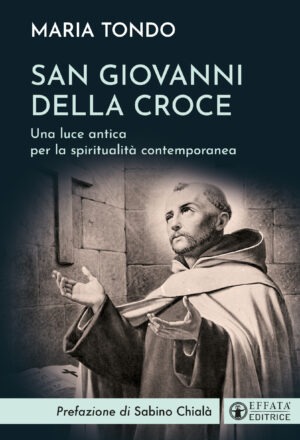 New appointment with the “good reading” in Salice Salentino. The volume “San Giovanni della Croce, an ancient light for contemporary spirituality” will be presented tomorrow Thursday 10 November, at 6.30 pm, in the Mother Church “Santa Maria Assunta” (Effatà Editrice, Series “The breath of the soul”, 2022, pages 176).

This is the last literary effort of Maria Tondo from Salice (in the picture), fifth work published after “Woman prophecy of the future” (1997), “In front of the project of life” (2007), “With Maria di Magdala” (2009) and “La Straniera” (2015). The evening’s program includes, after the greetings of the parish priest, Monsignor Massimo Alemanno, and the city councilor delegated for Culture, Luigi Palazzo, the opening speech by the author and the presentation of the book by Antonio Scandone, professor of literature. The initiative was promoted by the Municipality and the Parish of Santa Maria Assunta, in collaboration with Salic’è.

The volume, which has a pleasant graphic layout edited by Silvia Aimar, is characterized by a fine and elaborate writing, in the spiritual and “poetic” depth of the topics covered. It includes the preface signed by Sabino Chialà and the introduction of the same Tondo. It is divided into thirteen chapters (“The unexpected meeting”, “For a new departure”, “With a look at our time”, “Starting from afar”, “In the company of Mary”, “Immersed in silence”, “With the poetic force of symbols “,” In the deepest center “,” The living flame of love “,” With the spiritual inheritance “,” Towards the new horizon “,” Of the luminous faith “,” Getting back on the road “) .

“The literary work of Giovanni della Croce – explains Antonio Scandone – is all imbued with profound mysticism, as was the course of his entire existence. And yet Tondo, in this latest work, did not intend to weave yet another biography of the Spanish saint. If anything, the author has relived the inner story of the character, through his writings and his life choices, as a mediated reflection of his own existence. To the point of authorizing the reader to interpret this work as the outline of a sober and discreet autobiography in parallel. Of which the author herself hands us the guiding thread, when she states that writing a book is always a tell about oneself, manifest oneself“.

In Preface, Sabino Chialà among other things writes: “Giovanni (Della Croce, ed.) Presents himself as an atypical theologian, among those who prefer to use the language of poetry to speak of God rather than that of the dogmatic definition, thus reconnecting to an ancient tradition that sees in Ephrem the Syrian one of the best examples, not surprisingly declared a doctor of the universal Church shortly before John, in 1920. Two theologians who prefer the image, the paradox, the metaphor, as well as their Master who, captured by the simplest and most everyday realities, made them parables of the Kingdom. Maria Tondo (…) enters into dialogue with this giant of the past, not to look back, but as if to invite him to dialogue with our world, with its challenges and his opportunities. She thus weaves a dialogue of gratitude, in which the author says she wants to give an account of a meeting that took place many years ago, but is still alive and fruitful ”.

“With Maria di Magdala”, the poetry and the spring astonishment of the discovery