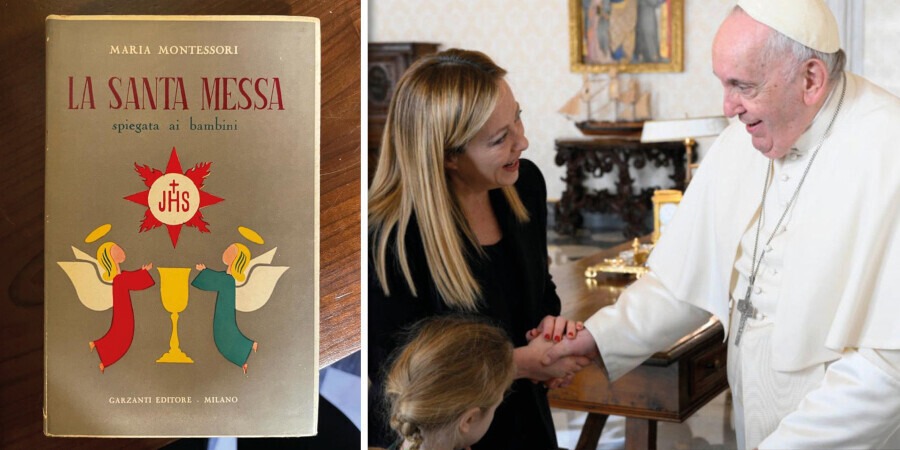 “He reminded us that in the Italian heritage we also have this great gift, thanks to Mary Montessori: to consider the religious education of the child as part of the education of humanity”.

Morena Baldacciprofessor at the Pontifical Salesian University of Turinthus comments one of the gifts offered by the Prime Minister, Giorgia Melonito Pope francesco, in his first audience in the Vatican as premier. This is Maria Montessori’s book “The Holy Mass Explained to Children”, from 1955. Already in her inauguration speech in the Chamber, Giorgia Meloni had mentioned Maria Montessori among the women who “built the staircase with the boards of their own example today it allows me to climb up and break the heavy glass roof placed over our heads. Women who dared, out of impetus, out of reason, or out of love”. We talked about it with the theologian and biblical scholar.

Why is it important today to rediscover this book by Maria Montessori and how does it fit within the complex of her work?

It is a text that is not well known and which is part of a series of texts by Maria Montessori dedicated to the theme of the child’s religious education. After starting the research and experimentation of her scientific pedagogy, which is the main theme of her reflection, Maria Montessori then applied the pedagogical method also to the religious dimension of the child. In this regard, I would like to underline the absolute novelty and genius of dealing with a topic totally unknown at the time. Today we are used to addressing the child as an active subject, but at the beginning of the twentieth century it was something completely unthinkable, both from the point of view of general Montessorian pedagogy and from that of pedagogy applied to religious experience. In a phase of maturity of her scientific method, Maria Montessori has chosen to apply it also to the religious dimension of the child. The hitherto unedited perspective is that of considering the child as already predisposed to a sort of openness to dialogue with God. For Maria Montessori, in other words, the child has an innate spiritual capacity. In addition to the book mentioned, you have written several books on religious pedagogy relating to the liturgical year, bearing witness to a method which, according to you, could already be applied from the very first kindergarten.

What does a child-friendly mass mean for Maria Montessori?

It means carrying out a real experimentation with the elements proper to the liturgy. The preparation of the altar, the objects, the spaces, the liturgical places, the entire ritual scene of the mass is reduced to scale, a typical aspect of all Montessorian pedagogy. The children are offered real contact with the chalice, the paten, the wafers… The intention is to get the children to touch the objects of the celebration, so that the children themselves can be helped to participate in it, according to the methods that suit them best.

Which elements of Montessori pedagogy, referring to the liturgical sphere, are in your opinion still valid for today?

First of all, attention to the human and to human growth. Maria Montessori’s is a pedagogical dimension based on the fact that men one becomes through an exercise of human care, from an early age. The other cornerstone of Montessori pedagogy, referring to this area, is the spirituality of the human, who conceives spirituality not as something detached from human formation, but as part of it. The connotations of spirituality can be different, but for Maria Montessori spirituality is something that always belongs to humanity.

Is this a warning to take into account also for the quality of our masses for children?

I would say yes. We forget that children in the liturgy are not beautiful statuettes to be displayed in a spectacular way, or to be hidden under the pews, but active subjects who must be respected by giving them the opportunity to participate in the liturgy to their own extent.