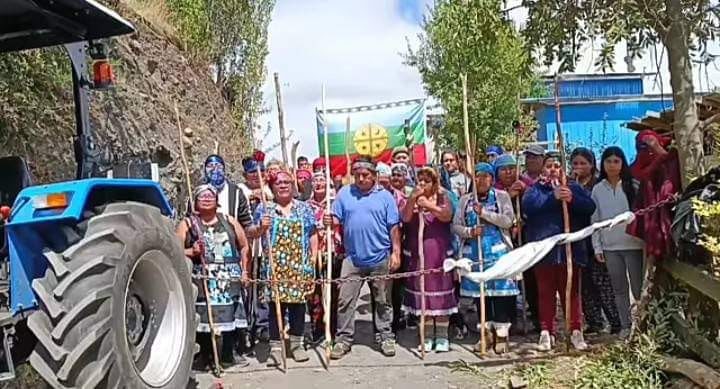 It is in this context that on January 11 and 12, a mingako was developed in alliance with communities, peñi and l’amuen from different territories, seeking to raise a küni to be able to develop satun, ngillanmawün kake küsow necessary to exercise correctly and concretely our spirituality.

Finally, we want to send a greeting to the different communities of our Fütawillimapu and Wallmapu in general that are in recovery exercising territorial control, therefore, we call for the unification of our forces to continue advancing and adding to these processes.

FREEDOM TO ALL THE MAPUCHE POLITICAL PRISONERS!!!

FREEDOM TO THE MAPUCHE POLITICAL PRISONERS OF PUEL MAPU!!!

JUSTICE FOR THE WEICHAJO ON HUNGER STRIKE!!!

STATEMENT OF THE INDIGENOUS COMMUNITY ORGANIZATION OF CHUMUL – LAGO RANCO

The indigenous community of Chamul at 8:00 p.m. on January 14, 2023 has taken territorial control by cutting off the access road to a private property within a Mapuche community… the objective of this control is to defend water.

The particular Mrs. Cristina who presents herself as a doctor with residence in Santiago began to make a deep well inside her property, endangering the water supply of the entire community.

Mrs. Cristina began her work without prior notice and without showing the hydraulic report to see the feasibility of this well.

This lady… did not converse with any ancestral authority or half a word with her adjoining neighbors.

We want to remind private individuals and State institutions that we will enforce our rights that are enshrined in agreement 169 and the protection that emanates from law 19253.

We demand that the owner of the private property be present and present the document that allows her to dig the 30.meters deep that she claims to be.

The ancestral leaders and authorities were not informed or consulted, therefore our territorial rights were disrespected.

This community comes from a Raillanca Licampan 1 family trunk and will enforce its customary law.

The defense of the ñenko is part of our spirituality and for the self-determination of the filkemonen.

From our territory we are firm in our authorities; machi, lawentuchefe weken, guillatufe, conas and lof mapu.

Fillke Müchülla (Families) from Llancacura entered the property that has been claiming its restitution to the Mapunche nation since 2020, the measure arises after the Chilean entities that had to provide responses requested by letter have not proceeded to the lawsuit regarding the intentions of the families interested in recovering territory to reestablish the Fillke Mongen, all forms of life, in the deteriorated spaces left by the foresters in the Llancacura mountain range, one of the train train ridges that rises on one side of the Wenuleufu river

According to what the families say, about 20 days ago the Canadian capital forestry company Hanckook began the work period that consists of extracting pieces of monoculture pine plantations in the territory, an occasion that led the families to speed up the claims process due to Due to the devastation that is coming with the measure, they decide to occupy the property located in what is currently known as the U playa el toro in the so-called coastal mountain range of the coast that is currently administered by the Chilean municipality of La Unión.

It should be remembered that the spaces in Mapunche recovery is the same sector that took place on January 11, 1655, the battle that eliminated 10,000 contingents of the Spanish army that entered that place in their advance towards the south of the Mapunche country, being intercepted by the troops of the Naucopillan and Küilapillan toqui who, with the help of the Wenuleufu river, were able to defeat the invasion between the Tren Tren (Llancacura and Rucahuadra hills.

Marlene Kuntz, here is Karma Clima: 'We fear the indifference of the people'
Leave your fears behind and move forward
There will be a provincial Mapuche meeting in Bariloche | El Cordillerano Newspaper
Tweet
Share
Share
Pin