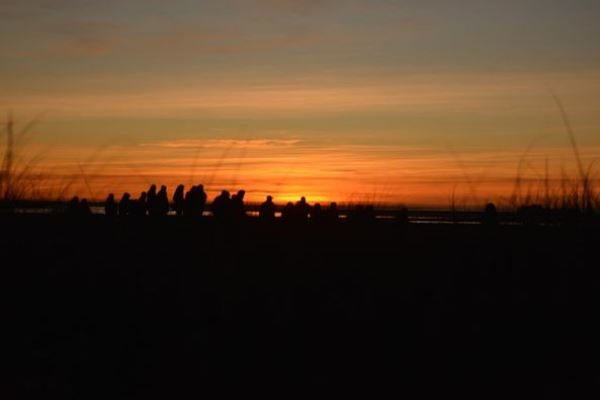 The completion of a cycle and its renewal with the return of the Sun or Wiñoy Tripantu find us the members of the Mapuche Tehuelche people immersed in the struggle for territorial discussion, its recovery and its defense.

This cycle that is ending has a journey through the territory marked by violence. Since the past wiñoy tripantu we have received the unexpected entry into the community territories of mining companies, authorized by the government knowing that there are unfulfilled rights such as Free, Prior and Informed Consultation, to obtain Consent. Because to tell the truth, the indigenous right is to express our Consent or our Non-Consent to these extractive projects and the Free Prior and Informed Consultation is the dialogue tool that the State must respect and promote in order to know that binding response.

Today, like a year ago, the gates of the community territories are closed to the entry of mining companies, despite the fact that the STJ of the province canceled the precautionary measure that prohibited the entry of mining companies, there is a community decision that confirms our position in defense of the territory. To the governments and to the Justice we say that this is Our Right.

Situation without consultation that is repeated in the Green Hydrogen project that has the endorsement of the ruling party and opposition without cracks. With the aggravating circumstance that 625,000 hectares of land are already earmarked for the development of the project for 75 years, including many communities and a dispersed population. The Somoncura Plateau may be a Natural Protected Area for the State (which it does not respect) but for the Mapuche Tehuelche People, the Zugun Curra or Speaking Stone Plateau has a spiritual entity that makes life possible in that part of the territory and any The project proposed by the State has an effect on the different lives that take place and includes all the families that live there. Families whose stories are linked to the concentration camp that operated in Valcheta during and after the Desert Campaign. To the governments, to the judicial and legislative powers, we say that we want to discuss the founding Genocide of the State, we also have Law.

In this cycle that is coming to an end, Elias Garay Yem, a peñi, was assassinated in a community conflict over public lands that the State “given away” to a private party under the pretext of installing a forestry company, which I never took care of and was licensed for 99 years, when not even he met the requirements established by Law 279. Perhaps the State thinks that Rocco can live 150 years to be able to return the land. The responsibility of the State is greater, as in the Antual Albornoz conflict where it has ignored all the complaints filed by the Lof, it even has a civil lawsuit against the State, a complaint in the Investigative Commission of Rural Land Transfers that worked in the Legislature until 2015 and whose file No. 1257/14 is in the State Prosecutor’s Office. Even with this background, plus a complaint in 2005 under the Integral Indigenous Law 2287/88 in the CoDeCI, the public lands with the community making use of the territory, were sold to a radical businessman from Zapala, violating the Rural Land Law No. 279 in force in the province of Rio Negro. The treasury scam is so crude that the deed was signed by Governor Miguel Saiz himself on March 13, 2007 under deed No. 50 in Viedma and for an extension of 9787.25 Hectares, the sale price was set and paid in Pesos Nine One thousand three hundred and forty-four and ninety cents ($9,344.90), that is, 0.95 cents per hectare, when in 2007 the reference price per kg of bread was set by the national government at $18, a figure that allows dimensioning the scam and the negotiated land. Victims of this conflict are the Lof Antual Albornoz and the Lamuen Natividad Antual, under a police cordon within the community territory, virtually besieged, enduring temperatures of up to -12 degrees below zero in a stable, with an imminent risk of life for several years. 84 days, next to a solidarity camp where María Antual has been for 77 days. That is why we say that under legal devices, Justice validates the dispossession of a community and in turn legalizes the Treasury fraud, because that deed is part of the arguments to request eviction while Law 26160 is in force, which prohibits community evictions. Justice has always been the executing arm of the territorial dispossession of the communities.

Immersed in a social discussion about the history of the territory, territorial dispossession, State violence, the communities have had the political capacity to generate events that make our strong presence visible. This strong identity process that occurs in society is the product of the discussion and cohesion that we have achieved to confront the State. The brake that we have put on community evictions, the different intercultural activities such as what took place last week in the intercultural Municipality of Bariloche, the March in defense of the Territory that the communities carried out in Viedma to express our proposal to Justice and to the government, the hoisting of the wenufoye at the National University of Comahue, the social mobilization that we generate with the Campaign for the Right to Identity “I am Mapuche” so that the census makes the Mapuche Tehuelche population visible, the care they provide for our Pu Machi people who work with our millennial knowledge, the many groups of Mapuzungun teachers who revitalize our language, the Intercultural Bilingual Education Modality schools, give an account of this time. But fundamentally we must highlight the spiritual strengthening that we are carrying out in each part of the territory by raising Nguillipun to start any encounter, trawn or fight. This puts the Mapuche Tehuelche People in a time of reconstruction after having been crossed by a Genocide not recognized by the State.

A people that has the dignity to defend their ways of life, their spirituality, their language, their culture, their territory. That is why we stand up against the economic, judicial, legislative and executive powers that intend to continue the Conquest.

In times of Wiñoy Tripantu, from the Meli Witral Mapu we renew our commitment to territorial, cultural, social and political struggle. Our wenufoye rises in the Wall Mapu, our spirituality is strengthened, our mapuzungun is revitalized, our spiritual authorities rise, we defend our territory, symbols of our pre-existence but also of the self-determination of the Mapuche Tehuelche People.