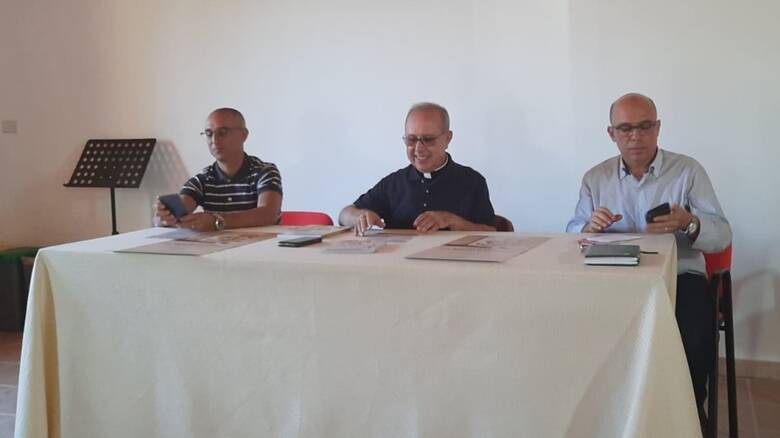 The complete program of the celebrations officially presented this morning

Oristano is preparing to celebrate one of the most important holidays of island Christianity: Our Lady of the Remedy. The traditional appointment of the month of September takes on particular importance because this year we celebrate the 70th anniversary of the coronation of the Madonna.

Together with the traditional masses and novenas, which attract thousands of faithful, various events have been planned to enrich the religious appointment. The program was presented at the Basilica del Rimedio by the rector Gianfranco Murru, the mayor of Oristano Massimiliano Sanna and the director of Istar Maurizio Casu.

“It was September 7, 1952 when Cardinal Tedeschini crowned the statue of the Madonna in a Rome square packed as never before”, recalled the rector, “this year we will remember it with a series of events that will continue beyond the month of September. But first I want to thank our Archbishop Roberto committee of the celebrations, the Municipality of Oristano and the Foundation for having supported us also financially, to organize this important event. Our Basilica must now be the place of communion with the Lord, with Mary and with our brothers: a center of spirituality ”.

Monsignor Gianfranco Murru then listed the scheduled events. Let’s start Saturday 27 August at 8 pm at the Auditorium of San Domenico where the celebratory volume “Our Lady of the Remedy of Oristano: history, faith and tradition” will be presented.

“The other most important aspect was that of the restoration, supervised by the Superintendency, of the statue of the Madonna”, explains Gianfranco Murru, “it has undergone an important restoration work and I can assure you that it is now a real jewel. From tomorrow Friday in the late afternoon it will be taken to the cathedral and will be exhibited in its reliquary for the usual celebrations and the veneration of the faithful. On Sunday 28, at 9 pm, a great torchlight procession will take place which will start from Piazza Cattedrale. From there a procession will unfold along Corso Umberto, the Piazza Roma. The place of the coronation, and the journey will resume crossing via Tirso to reach the Basilica and the Center of Santa Maria Bambini, our center of excellence ”.

“Wednesday 7th Septemberthe most awaited moment, the ceremony for the 70th anniversary of the coronation of the Madonna.

The solemn anniversary will be presided over by Cardinal Mauro Gambetti, vicar general of Pope Francis, sent to Oristano for the occasion.

The ceremony will be celebrated at 6 pm in the square of the Basilica and will be concelebrated by the archbishops and bishops of Sardinia and by the parish priests of the metropolitan Chapter.

Mayor Massimiliano Sanna recalled that the Remedy festival is the most important moment of the city exhibition: “It is part of the program of the September of Oristano”, says the mayor, another moment full of events. It begins with the Remedy, then Santa Croce, Sant’Efisio. The Municipality immediately supported this important occasion for the celebrations of the seventy anniversary of the coronation of the Madonna. Finally, the street vendors will enrich the feast of the Madonna, which will end on 9 September with the cultural and musical appointment of the gospel choir directed by Salvatore Saba ”.

Maurizio Casu, president of Istar, finally focused on the volume dedicated to the Madonna.

“The book was born thanks to our rector and the mayor and to a large working group and the Foundation, which believed in this project”, recalls Maurizio Casu, “to revive this important event, the 70th anniversary of the coronation. Hence the idea of ​​the publication. I like that all the authors, as well as an ex voto, have their own gift, offered by everyone and by the whole city. It traces the most important historical moments of the Remedy festival. All accompanied by a rich photographic documentation “.

A moment of the presentation of the celebrations

Madonna del Rimedio, off to the special party for the 70th anniversary of the coronation – LinkOristano