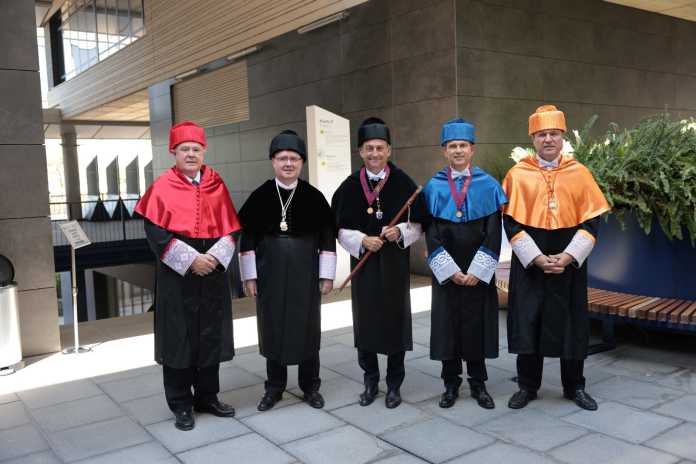 The rector, Gabriel Pérez Alcalá, has assured in his inaugural speech of this academic year 2022/2023, the tenth since its creation, that “Quality is the mirror in which all universities must look, regardless of their legal nature, be it public or private. The important thing is if they are good universities, if they have the level of quality that they have to have and if they are accessible to students”. Thus, university quality has been the axis that has focused all his speech and, in this regard, he has stated that it is necessary to reform the Andalusian Law of Universities of 2011 “because the Andalusian law cannot be one of correction of the Organic Law, but one of quality standards, evaluation and regulation of the competence of the Andalusian University System”. In Andalusia and in Spain, he continued, “university debate is very poor, it is highly ideological and profoundly superficial.”

As the rector explained in his speech, university quality can be measured based on three fundamental variables: the scientific and cultural productivity of its faculty, the high academic performance of its students and the high rate of employability of its graduates. “A good university is an ecosystem that makes all this possible. What determines quality are the three variables and their interrelationshipbecause being good at one or two of them does not give a quality university”, he summarized.

For this reason, Gabriel Pérez has underlined the need to have “a well-selected faculty, with a clear research vocation, passion for teachingin permanent training, demanded and recognized, together with students demanded upon entering and during their training, and an institutional and service system that creates spaces for research and learning, for personal relationships and individual development and a system of cooperation in pursuit of common goals”.

In this sense, the rector of Loyola University has stated that for universities to pursue quality so that the system is of quality, it can only be done “evaluating and making them compete”.

To end his speech, the rector assured that “Loyola University, which today celebrates ten years since its start of activities, is today a quality university, backed by data every year since we appear in the statistics.” Thus, he has indicated that Loyola is today “the third private university in Spain for scientific productivity of its faculty, and above three Andalusian universities in productivity per full-time PDI.

Likewise, Loyola’s commitment to academic excellence is reflected in the best rate of academic performance of Andalusian universities both in Degree (91.6% Ratio of credits approved over those enrolled by students), as in Master (98.97%). In the field of Bachelor’s degrees, Loyola University is 8.5 percentage points above the Andalusian average, while in the Master’s, it is 10 percentage points above the average of the rest of the universities in Andalusia, according to the latest report “Spanish universities. An Autonomous Perspective 2021” published by the CYD Foundation.

This quality in training is also reflected in the employability rates highest in Andalusia and the fact that it is the first Andalusian university in volume of students in international mobility programs (11.83%, of total enrollment, 5.6 percentage points above the next in Andalusia) and the third in Spain. In addition, Loyola is the Andalusian university with the highest percentage of teachers of foreign origin (5.02%, two points above the next in the Autonomous Community).

Thus, it has been concluded that “At Loyola, quality, due to the data that reflects what we do, is not a speech by its rector, it is an achievement of the entire university community and of the concept of university that is being developed. At Loyola we are making a good university, which will improve every year because it has a culture of demand and collaboration that it will not lose, because it is an imperative of the institution that inspires and promotes it, the Society of Jesus”.

In the chapter of internationalizationin the 2021/2022 academic year, the university welcomed a total of 593 students from other universities who enrolled in official studies, and 349 Loyola students completed their training in foreign universities.

On the other hand, in the field of employability and entrepreneurship, the general secretary has indicated that the University maintains a total of 2,628 internship agreements with companies, having signed 450 new agreements during the past academic year. In addition, 1,141 undergraduate and 451 postgraduate students did internships in national and international companies during the 2021/2022 academic year, with an average duration of 2.36 months in the case of undergraduate degrees and 2.96 months in postgraduate studies. Likewise, more than 269 job offers have been managed and 193 entrepreneurial projects have been promoted and tutored.

As regards the researchone of the central axes of the University, Pedro Pablo Pérez, has highlighted that scientific production has resulted in the publication throughout 2021 of 321 articles indexed JCR, Scimago and other indexes.

Pérez has pointed out that, in this context of comprehensive education, the Evangelization and Dialogue Service whose objective is to promote the evangelical values ​​of Ignatian spirituality that are reflected in Loyola University. In this pandemic context, the service has made a significant effort to maintain its activities and training experiences in the fields of spirituality, volunteering and dialogue in face-to-face mode. In data: 280 people from the university community actively involved in participating/knowing Ignatian spirituality, 230 participants in volunteering and ecology activities and 226 participants in dialogue activities.

Finally, the ETEA Foundation-Development Institute from Loyola University, developed 28 cooperation and knowledge transfer projects in 13 countries in Europe, Central America, South America and the Caribbean, with a volume of managed funds of 1.2 million euros.

The rector of the Comillas Pontifical University, Enrique Sanz SJ, began his inaugural lecture “recalling and thanking the collaborative work carried out by members of our Loyola and Comillas universities in various fields: teaching and research, identity and mission, transformation digital, etc.”

During his speech, the rector of Comillas outlined the challenges of the universities of the Society of Jesus in the s. XXI. In this sense, in the first place, he has assured that “all of us who work in the university institutions of the Society of Jesus are invited to carry out our task from charity, a charity that is a distinctive sign not only of the I but of the we in the plural. ”.

Regarding this “we” he wanted to underline the connection between the good work that a university can do for society and the good work it can do if it is part of a network. In this sense, he has stated that “a network can certainly multiply a university; however, a network should never weaken or diminish the enormous potential that a higher education center of the Society of Jesus contains”.

With the student as the center and raison d’être of our institutions, the Jesuit Enrique Sanz has indicated that “the course that begins today places before us an important challenge that we share with other universities of the Society of Jesus in the world: to work to defeat to fragmentation, superficiality, instrumentality, populism, polarization and post-truth. An important challenge to which we will have to respond with intelligence, creativity, generosity, patience and resistance in these areas: teaching, research, entrepreneurship and job placement, and comprehensive training. This is what certainly configures the training offer that we want to offer our 21st century students”.

Loyola University, a university of the Society of Jesus, began its activities in 2013 and is today a reference university in the Spanish University System, due to its academic results, its internationalization, the employability of its graduates and its research. It already has nine promotions of graduates and a current volume of 4,900 students in its three locations in Seville, Córdoba and Granada.

Loyola University offers the possibility of studying a wide range of degrees, double degrees and specialization diplomas on its campuses, in the areas of Business Administration and Management (ADE), Economics, Communication, Criminology, Law, Education, Engineering, CC Health, International Relations, Theology and Arts. It also has a wide range of postgraduate training, doctoral programs and executive training. Likewise, it develops extensive research work in these fields and has a strong social presence in the cities where it works.

Loyola is consolidated as a quality university, a benchmark in the Andalusian context