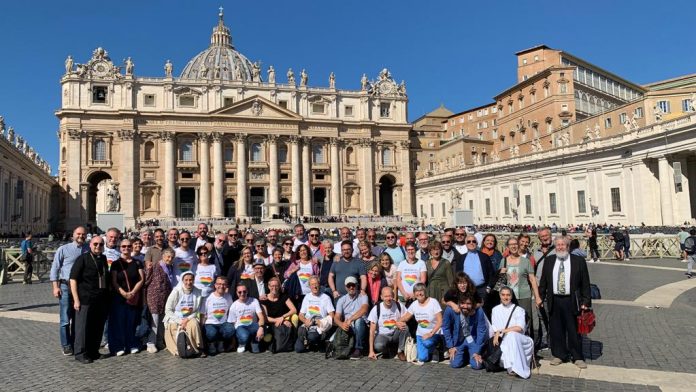 There was also a group of LGBT + Christians from Ragusa at the audience with Pope Francis yesterday morning in St. Peter’s Square. Francis met some members of the association La Tenda di Gionata, which brings together LGBT + Christians. Over one hundred gay and lesbian people, their parents and the pastoral workers who accompany them were present. “Being there – explains Luana Gravina – has meant bearing one’s life as a witness that we exist and that we want to have a place in the Church. She who is a Mother must not be afraid to embrace her children, everyone ”. “Was I happy to have attended today’s hearing? If I felt contentment, I felt it in meeting and hugging mothers, fathers, daughters and sons, priests I had only seen in online connections from 2020 to today and if I felt emotion it was above all for these priests who have decided to walk with LGBTI + people concretely embodying the message of love of the Gospel “, explains Anna Battaglia who adds:” The audience took place in St. Peter’s Square and not in the Nervi room and we saw the Pope pass from afar on the white car, in the corridors between the sectors occupied by all of us.A man advanced in years, smiling and blessing who carries a huge load on him. And when sitting under the shelter surrounded by the men of the ceremonial, he began the audience with the verses of Peter’s speech in the house of Cornelius Acts 10, 34-36: “… I am realizing that God does not prefer people but welcomes those who fear him and practices justice to whatever nation he belongs to ”, I wanted to see in those words his acknowledgment of our requests, as if to justify the reason for my being there”. And he concludes: «I am aware that a man, with all his holiness, risen to be pope, can alone have the power to cancel the sin of the Magisterium Church towards LGBTI + people is only a naive hope. The task of healing injustice and giving a dignified life to all LGBTI + people belongs to each baptized person because it is the faith of each one that allows the construction of that Kingdom of which the Jew Jesus spoke ». And Ragusa will host, from 30 September to 2 October, a weekend of spirituality for LGBT + Christians, their parents and pastoral workers, entitled “In love there is no fear”. There will be presences from all over Sicily and the rest of Italy. The weekend, promoted by ‘Cristiani Lgbt + Sicilia’ and by ‘Traveling to Emmaus, parents of LGBT + people’, will be held at the ‘Sacro Cuore’ Ignatian Spirituality House (of the Jesuit fathers). There are also moments open to the city. Friday 30 September, at 9.30 pm, a moment of prayer. Saturday 1 October, at 3 pm, debate on faith and homosexuality by Don Fabio Coppola and Don Gero Manganello. Sunday 2 October, at 9.39 am, training session on: ‘Internalized homophobia and Coming Out’ by Elvira Adamo. For these events there is no need to book. In recent days, the initiatives of the Lgbt + Christians and the Tenda di Gionata had been presented to the bishop of Ragusa, Monsignor Giuseppe La Placa, in a meeting held in the Vescovado. Also present at the meeting was Father Cesare Geroldi, a Jesuit, in charge of the House of Spirituality in Ragusa where the weekend will be held, which attracts the presence of numerous LGBT + believers. “I felt – says Anna Battaglia – true listening to our reality and this makes me hope that we can build an effective dialogue”. 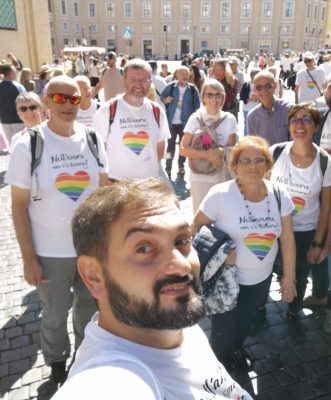 Lgbt Christians from the Pope. In Ragusa from all over Italy for a spirituality meeting