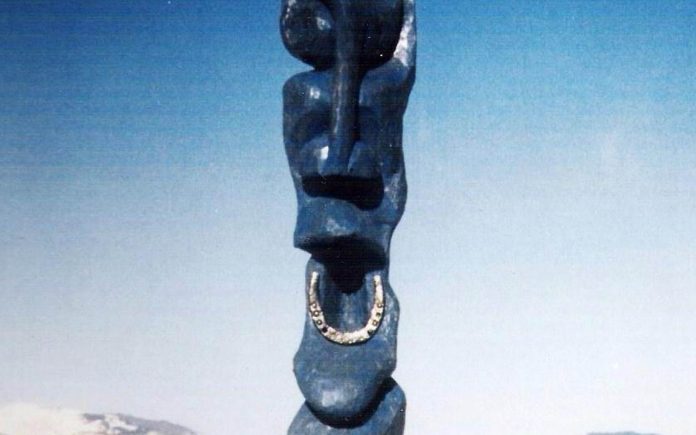 Lezama Perier has always been a defender of mythology, also in the hardest years of the Basque Country. All of his sculptures have the theme of Basque mythology and existence versus eternity. He speaks through his art of the mythological influence on wood, stone and iron, and of the spirituality of our life in general.

The sculpture «Zaldi» becomes part of the patrimonial collection of the Museum of Las Encartaciones to be guarded and preserved in the Museum belonging to the General Assemblies of Bizkaia. 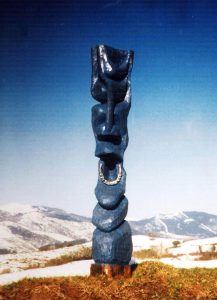 Patxi Xabier Lezama Perier. Creator who is part of the generation of contemporary Basque sculptors considered one of the main renovators of Basque sculpture in the second half of the 20th century. Vitally representative of the symbolic and the mythological. The awareness of the importance of Basque culture (its origin, its history and its traditions), as well as the process of modernization of folklore by the avant-garde to provide a new look at ancestral issues.

Patxi Xabier Lezama Perier was born on June 20, 1967 in Zalla, Bizkaia (Spain). Sculptor considered one of the most representative Basque mythological artists on the international scene, he cultivated sculpture in his beginnings, in an abstract expressionist line. In a first and ephemeral stage he made works in terracotta, a series of sculptures still influenced by the figurative tradition.

Around 1990, with his job in the forge, he began working with iron. Learning the age-old secrets of the art of forging, he made his first abstract sculpture in iron, Amalur: he combines iron and stone (materials with strong connotations mythical within Basque tradition and culture) relates sculpture and architecture.

This work marked a before and after in his artistic career, not only because of the choice of materials mentioned, but, above all, because mythological concepts were based on it. He undertakes a cycle of non-imitative sculptures, his concern for Basque art and culture increasing. His interest in architecture gave rise to pieces such as Amalur.

The archetype of the matriarchal Goddess and the symbolic structure of the female image in Basque mythology. The Goddess and the fine creative sensibility, converted into a classic reference of contemporary Basque culture of the Mother Goddess and her omnipotent character, represented as the Divinity that weaves the universal network of the cosmos. Wrought iron and stone spheres in the sculpture of the universe hypothesis of Mother Earth.

An ecological revision of Nature in its symbolic image as a creative capacity where creativity as a matriarchal-feminine attribute, which every creator in contact with existence demands, which will finally open up to the limit stage of the Spirit as the horizon of transcendent meaning.

The feminist movement and its struggle for liberation for emancipation take on special relevance in this production sculpture that reflects the reality of the creative archetype that matriarchally explores the world of the maternal body, whose psychological reality symbolically embodies a woman, an interesting mystical worldview of the archetype of the Mother Goddess (Amalur) for the artistic cultural mediation of the Basque people. The scale in Totemism had been approached at the end of the 80’s in his plastic ethnic-cultural investigation.

He holds his first exhibition and the artist’s work would focus mainly on Basque mythological sculpture. In the 2000s he opens a new stage of experimentation. Until then, curved lines predominated in his language and he adopted more moving and restless surreal rhythms, easily understood sculpted in wood. Surrealism would differentiate him from those marked by abstraction and geometric schematism, his concern for Basque art and culture increasing.

The scale in Totemism had been approached at the end of the 80s with his plastic experience in wood, a material that, due to its lower weight, facilitated the increase in size and, due to its soft texture and low ductility, opened a new experience in his investigation. ethnic-cultural plastic.

In the following decades he broadened his horizons in the representative field of Basque literature. His work is distributed by various museums and international public institutions.

Lezama, the artist of Basque mythology. – North Express | News from Vitoria-Gasteiz and Álava.