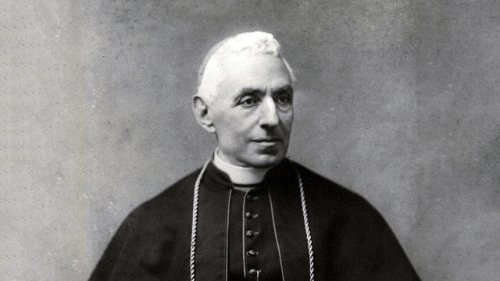 Bishop of Piacenza and considered the father of migrants, he suggested to Saint Pius X the creation of an organization in the Holy See for the attention of all the migrants of the world

In response to their request, the Special Office for Emigration was created, the forerunner of the current Section for Migrants and Refugees, which is part of the Dicastery for the Promotion of Integral Human Development.

(VaticanNews).- The future saint, who Pope Francis will canonize in Saint Peter’s Square, is Juan Bautista Scalabrini born in Fino Mornasco, in the Province of Como in northern Italy in 1839. He was ordained a Priest on May 30, 1863. November 9, 1997, John Paul II beatified him. Vatican News interviewed Luisa Depontti Scalabrinian secular missionary, Italian, who has lived in Mexico for 5 years. With her, we take a tour of what was the life of the next saint.

According to Deponti, Scalabrini, I wanted to be a missionary, announce the Gospel in distant countries, but his bishop did not allow him. He worked in his diocese, in the seminary and also as a parish priest, in a parish in Como.

“The Industrial Revolution was beginning, the exploitation of the workers, a massive migration of Italians was beginning, and he also realized the importance of religious education for young people. That is why he wrote, for example, a small catechism for children and was always concerned with creating schools of Christian doctrine”.

The secular missionary also tells that, At the age of 36, Pope Pius IX elected him bishop of Piacenza.which allowed him to closely follow the different social issues of his time, he worked hard in the formation of the clergy, he often visited his 300 parishes, realizing that 12 percent of his parishioners were emigrants who lived abroad, he pointed out Deponti, it was the time of massive immigration of Italians to the Americas first, Argentina and Brazil and then the United States.

Scalabrini and the issue of migration

Scalabrini, as Deponti tells, seeing the situation of the emigration of Italians abroad, wanted to solve the causes of migrationa migration caused by the poverty and living conditions of those times. He is deeply involved in this problem and in 1887 he founded the Congregation of the Missionaries of San Carlos Borromeo for the emigrants. Congregation that today continues its mission, working with migrants and refugees in various countries of the world.

Then, in 1895, she also founded the women’s branch, the Missionary Sisters of Saint Charles Borromeo Scalabrinians, who also began to work with the Italians and today, confirms the secular missionary, are present in many countries working with migrants and refugees of all nationalities. and religions.

Instead, the Secular institute emerged in 1961, 56 years after the death of Scalabrini, who died in 1905. It emerged in Switzerland and is inspired by the spirituality of Scalabrini.

On the charism of the future saint

Speaking of Bishop Scalabrini’s spirituality, Deponti said that it is focused on the centrality of Jesus Christ, on a great love for the Eucharist, for Jesus crucified, to whom he entrusted in the most difficult moments of his pastoral work. Scalabrini was convinced that the Church is the continuation of the Incarnation of Christ in the world.

“His spirituality can be defined as spirituality of Incarnation. Every baptized person, every Christian is called to continue manifesting in the world the love of Jesus Christ, the love of the Father for all others. It is a very open, universal spirituality. The bishop also had a great devotion to the Virgin Mary, a strong apostolic pastoral zeal”.

He was never indifferent to social problems, such as poverty or situations in which he felt he had to get involved to alleviate the suffering of his brothers, he said.

On his work with migrants

The work of the future saint in regard to migration in Europe, was involved, not only at the religious-pastoral level, but also at the political-social level and also at the scientific level with studies, research and statistics on the subject of migration with conferences, raising awareness in the society of his time. He promoted laws in favor of emigrants, he also involved the laity in legal support work at the ports of departure and arrival of immigrants. Scalabrini, Deponti said, had a prescient vision of migration. A structural phenomenon of his time with the industrial revolution and today with globalization.

Scalabrini visited missionaries and immigrants in the United States in 1901 and in Brazil in 1904. He suggested to St. Pius X the creation of an organism in the Holy See for the attention of all the emigrants of the world. Suggestion that the Holy Pontiffe started with the creation of the special office for emigrationforerunner of the current Section for Migrants and Refugees that is part of the Vatican Dicastery for the Promotion of Integral Human Development.

More than a century after Scalabrini’s death, his legacy and his charisma are still very currents in today’s world, in the world of migration. As the secular missionary said, migration is considered by Pope Francis one of the most important phenomena of our time, which the Universal Church must take into account in its pastoral action in all the countries of the world.

Deponti affirmed that the charism of the future saint continues in his family, the Scalabrinian family, which includes thousands of missionaries and volunteers around the world, who “embrace and become migrants with migrants, to collaborate in the dream of God to unite all peoples in one family”.

The scalabrinian family It is composed in a particular way by three institutes of consecrated life, the first are the Scalabrinian Missionaries, priests founded by John Baptist Scalabrini in 1887, they are about 650 religious spread over 33 countries. Their pastoral and missionary action, said Deponti, takes place above all in parishes, migrant houses and also in centers of the Apostleship of the Sea where they assist sailors and sea workers, have schools and carry out research studies on the subject of emigration. .

The second Institute of consecrated life in the Scalabrinian family are the Scalabrinian missionary sisters, founded in 1895 by the future saint, in collaboration with the Blessed Mother Asunta Marchetti and the servant of God Father José Marchetti. The sisters, said the missionary, continue to work today in 25 countries around the world, with 110 missions. They are above all schools, hospitals, psychosocial assistance centers, health centers in shelters and promotion of migrants and refugees. Since 2018 the congregation has started the Itinerant Service project characterized by assistance to migrants and refugees in border areas

Juan Bautista Scalabrini, ‘father of migrants’, will be a saint

Good and cheap seers without cabinet with today's horoscope point out that Aquarius has bad company
the soulless party
The analysis. Michelangelo's Creation of Adam bent to Artificial Intelligence
Tweet
Share
Share
Pin