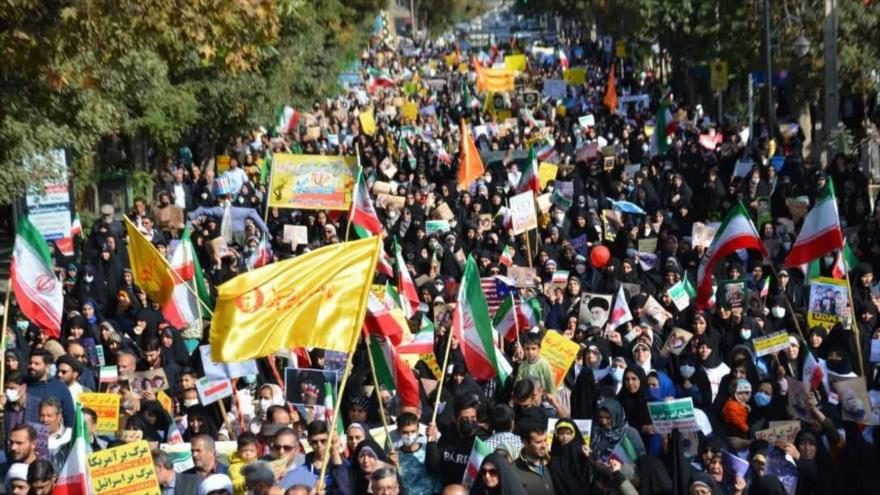 The Iranian people demonstrate en masse in several cities against the blasphemies of a French magazine and the interference of the West in the affairs of their country.

Thus, Iranians across the country strongly condemned the recent publication of offensive cartoons by the French magazine charlie hebdo against the Islamic figure represented by Ayatollah Seyed Ali Khamenei, the Leader of the Islamic Revolution of Iran.

At the same time, they expressed their strong condemnation of the interventions of Western countries, in particular France, Germany and the United Kingdom, in the internal affairs of Iran and their support for the recent disturbances in the Persian country, and called on the Government and the Iranian Foreign Ministry to take all possible legal and legal actions to rebuke them.

“This despicable move by the absurd French publication, which is in line with the attempts of Western countries for the past four months, especially the stupid support of the foolish French president [Emmanuel] Macron [a los disturbios en Irán]It is considered as a sign of the failure and collapse of morality and spirituality.read a final resolution issued after the event.

The protesters pointed out that the “insolent movement” against the religious authority demonstrates the “rancor” and “anger of the enemies against the greatness and the brilliant school of Islam,” as well as the resistance of the “faithful” Iranian nation.

In this context, they have urged attentive young people in Europe and the United States who are seeking the truth to form a resistance front to prevent a further collapse of human and divine values ​​in the West and to oppose ridiculous behaviors that accelerate the destruction of humanity. morality and spirituality in western societies.

In the note they warn that today the Western world has become the center of production of anti-human thoughts and ideas and of the design and organization of terrorist groups with different cultural formations, etc., for this reason they ask all cultural, social and political bodies internal and international relations bodies promote, in a coordinated action, the strategy of the “clarification jihad” against the enemy current.

In addition to thanking the country’s judiciary for the prosecution of the murderers and criminals in the recent riots, ask them to use all judicial capacities to bring to trial the elements and perpetrators of the desecration of Islamic sanctities and the highest Shiite religious authority in the Islamic Republic.

On the other hand, they have warned the perpetrators of these despicable measures and those who insult religious sanctities of the vengeance and fury of the Muslims and the free people of the world by reminding them to learn the lesson from the unfortunate fate of the people who blasphemous against the Islam.