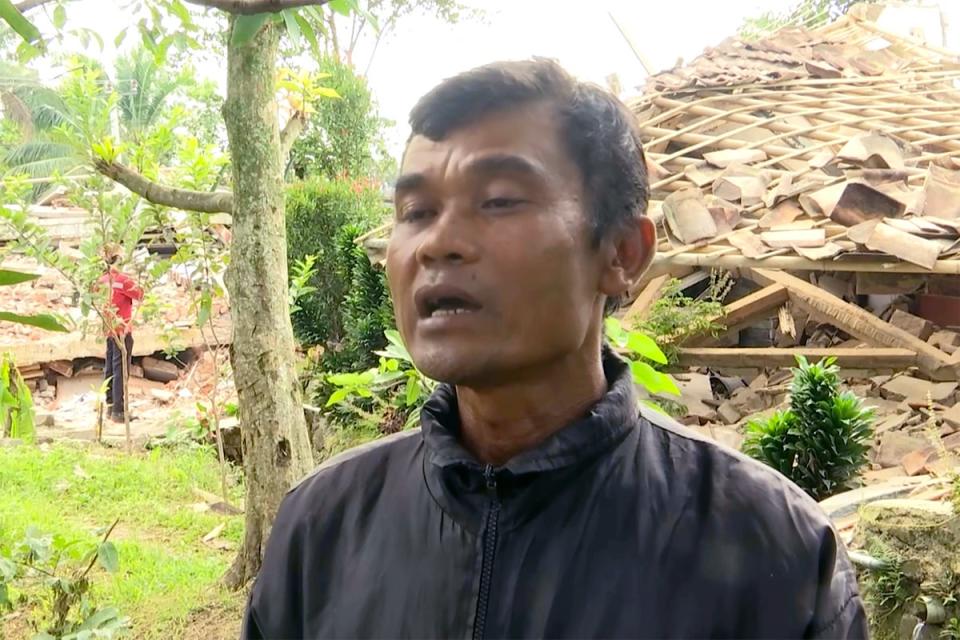 Enjot was tending her cows on the hills near her home when the ground shook.

The magnitude 5.6 quake killed more than 268 people, including 11 of Enjot’s relatives. Her sister-in-law and two of her sons were injured in Monday’s earthquake, among hundreds of others.

Now, Enjot visits his hospitalized loved ones and tries to rebuild his life, like thousands of Indonesians after the disaster.

“My life suddenly changed,” said Enjot, 45, who like many Indonesians is known by only one name. “From now on I have to live with it.”

The quake’s epicenter was a short distance south of Enjot’s hometown of Cianjur, about a three-hour drive from Jakarta, the capital. After receiving a call from his daughter, Enjot jumped on her motorcycle and rushed home, where he arrived within minutes to see his neighborhood collapsed.

“Men, women and children were crying as people who were trapped in the collapsed houses yelled for help,” he recalled. “I saw terrible devastation and heartbreaking scenes.”

His sister-in-law and children, who were visiting from a nearby village, were some of the luckiest. Other people heard their screams from the rubble and pulled them out.

The woman and children suffered serious head injuries and broken bones, and were being treated at an overwhelmed hospital.

According to the National Disaster Response Agency, by Tuesday afternoon more than 268 people had died, and hundreds more were injured or missing, almost all in and around Cianjur. The number of deaths is expected to increase.

Like many other villagers, Enjot desperately dug through the rubble for survivors and managed to rescue several people. But blocked roads and damaged bridges prevented authorities from bringing in the heavy machinery needed to remove large chunks of concrete and other debris.

Throughout the day, relatives wept as they watched rescuers remove mud-covered bodies, including Enjot’s nephews, from destroyed buildings.

Not far from Enjot’s home, an aftershock caused a landslide on the home of one of his relatives, leaving seven people buried inside. Four were rescued, but two nephews and a cousin died, he said.

In a neighboring village, his sister, a cousin and six other relatives died when their houses collapsed, Enjot said.

Faced with such a sudden loss of life and with no place to live, Enjot wonders what’s next.

He and thousands of others live in tents or other temporary shelters set up by volunteers, barely enough to protect them from the monsoon rains.

“The situation is worse than what you see on TV,” Enjot said. “We are thirsty, hungry and cold without adequate tents and clothing, and without access to clean water.”

“The only thing I have left,” he said, “is the clothes I’ve been wearing since yesterday.”