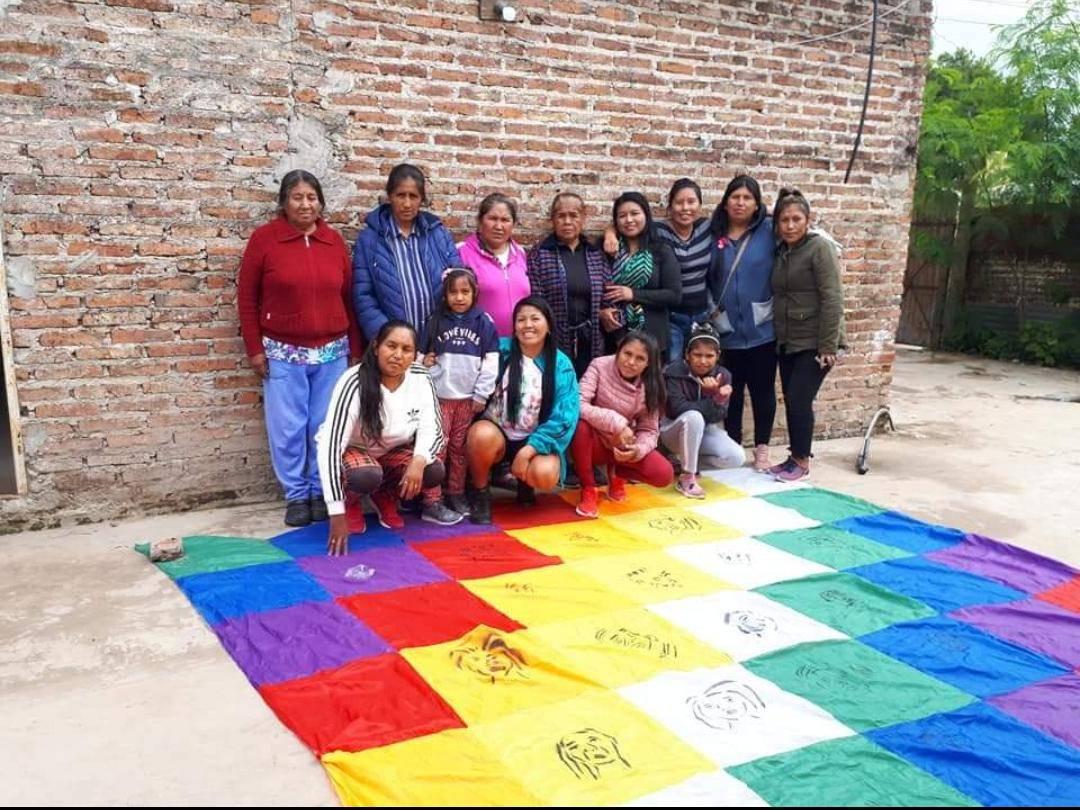 The Movement of Indigenous Women and Diversities for Good Living is made up of women and diversities from the 36 original nations that inhabit the Argentine territory. They walk together, they call each other “sisters”, and they speak out against terricide. They understand that the anti-patriarchal struggle is incomplete if it is not also presented as anti-racist and anti-colonial. They claim the ancestral worldviews of reciprocity and harmony between territories, bodies and peoples. They proclaim “Good Living” against the civilizational matrix of capitalism, which brings death. “We are a movement that accompanies, embraces the struggles, the territories, recovers identities, recovers a worldview and is not afraid of anything,” says Romina Noelia Naporichi, who belongs to the Qom community and lives in Rosario. It was in 2012 and in this same city where she forged the organization that later became the Movement: The National March of Native Women.

Romina Noelia Naporichi belongs to the Qom nation. She is 28 years old, with long, straight hair down to her waist. She was born in Chaco, in Juan José Castelli and when she was 13 years old she told her grandparents that she wanted to study, to go to a secondary school. “I suffered a lot from racism and discrimination. The city of Castelli is inhabited by country people, people with a lot of money. It was rare for an indigenous woman to reach secondary school, and there was no public school for the community, you could only access the Yo Si Pod program, and they always gave me the same, ”she says.

So, with the help of her grandparents, Romina went to private school. She is private and catholic, reserved for Creoles. “That’s where the torture began for me. That sometimes I appreciate, because if she hadn’t gone through that she wouldn’t be the person I am now. There I realized the differences that the people who inhabited the place made towards our communities. They charged me double what they charged, they gave me double the work, they exposed me twice, it was all double, it was real torture, ”she says.

The limit, he says, was when they cut his hair. “For our communities, having long hair has its meaning. I asked my grandparents to do something, and they told me that my mother was in Rosario. I didn’t know her.”

Thus, in 2006 they started the march. They left the territory and began a fragmented path that brought them to the south of the province of Santa Fe. “We began to come from Chaco little by little, as far as the money would give us. My grandmother was an artisan, she made baskets and we sold them in the towns. With what we raised in money, we returned from traveling. That’s how we got to (the city of) Santa Fe. We lived in some wagons, where people from the community lived. We spent the New Year there, and some time later the three of us came to Rosario”.

From ancestral territory to urban territory

Romina’s story is repeated in thousands of indigenous people who are forced to abandon their territories because they do not have guaranteed conditions of access to something as basic as education or health, or because of the advance of extractivism, which devastates the territories and expels to the communities in pursuit of a greater economic benefit for a few, without generating jobs and expelling the communities from their ancestral territories. Those same ones that the National Constitution and various laws say belong to the original peoples. Indigenous history from 1492 to the 21st century in Argentina seems to repeat itself over and over again.

“This territory of the city is not my territory, because I come from the countryside, I come from the north, from Chaco, a province that is punished by extractivism, and that should be my territory, I should be there,” reflects Romina, while He is waiting to enter the Travesti, Trans and Dissident Secondary Educational Space that began operating last year at the La Toma Cultural Center, from Tucumán to 1300: he wants to finish school to study journalism. 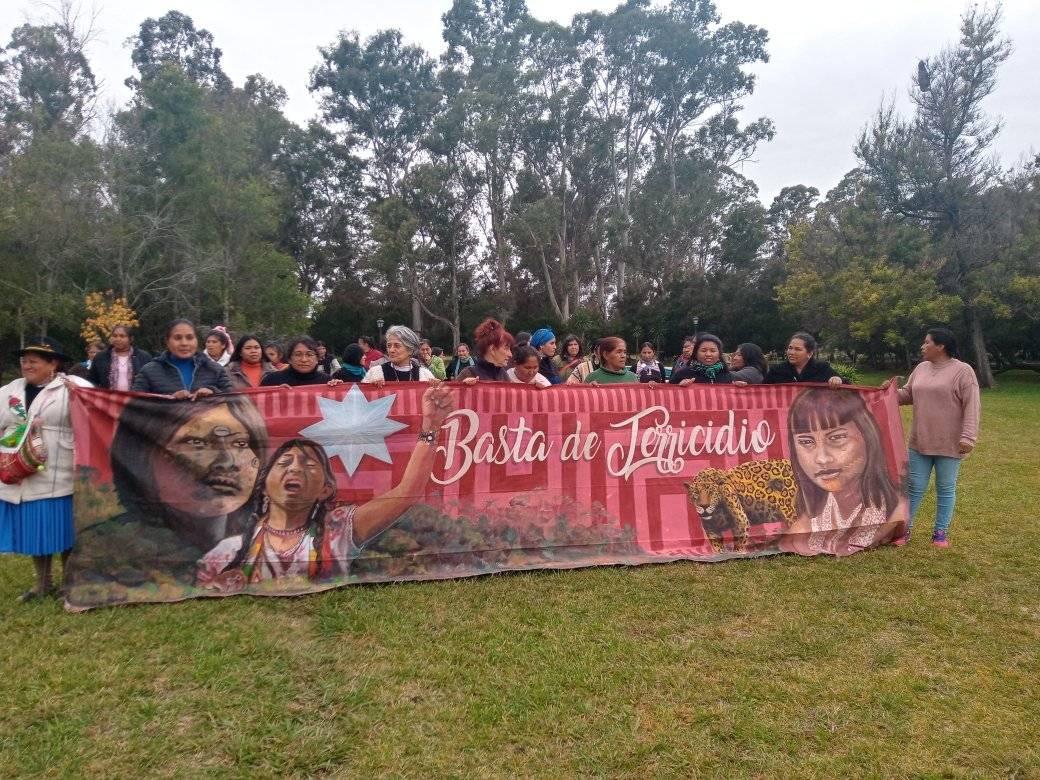 When she arrived in Rosario, Romina settled in her mother’s house, in the Qom de Rouillón neighborhood at 4300. Her mother was an evangelical pastor, and she invited her to go to church, but she refused. “That was not what my grandparents had taught me”: indigenous spirituality, medicinal plants, ceremonies, lineages, union with oneself and with the territories.

He started going to school in front of his house and, he says, he didn’t talk to anyone. All her attention was focused on understanding what her teachers were saying, because she, in her territory, spoke Spanish mixed with Qom. “In my community in the western zone, the boys don’t speak Qom and it was difficult for me to speak Spanish well,” she recalls.

That is why he felt at home when, a few years later, he went to visit a friend who “had come down” from the Chaco to another community in Rosario: “the Zapato village, which is by Juan José Paso, in what was a factory of abandoned shoes”. There, a 16-year-old Romina could speak in her ancestral language, and they understood her. And it was precisely in that neighborhood where she, without knowing it, came into contact for the first time with an emblematic figure of the Movement of Indigenous Women for Good Living: Moira Millán.

Moira Millán is a Mapuche weychafe –warrior–, activist, one of the leaders of the movement to recover ancestral lands and today a member of the Movement of Indigenous Women for Good Living. “We were there and my friend told me that the community leaders were waiting for a person at the health post.” And they saw her. Moira got out of a car dressed in her Mapuche clothing. “We got to the entrance and they slammed the door in our faces. Then we walked around some corridors to listen through a window: she began to talk about the strengths of the communities, spirituality, how important women had to be within the communities, the young people, the children, the decisions ” Roman recalled.

“I was fascinated with the speech she had given, all the things she had worked on in the territories and why she had gone for a walk.” Before returning to her house, she spoke with a community leader and asked her for Moira’s phone number, but she never had the courage to call her. “When I had the opportunity to meet Moira again, she was already 18 years old. They did the Original Women’s March in Buenos Aires, and I went. I spoke to her for the first time and started walking.”

“Starting to walk is belonging to the Women’s Movement, standing as a leader in the middle of nowhere, feeling that I could do things that I never imagined I would do.”

Today Romina is a leader in the urban territory she inhabits. Her militancy began when she was very young, when she was still going to school and didn’t understand why the only thing the kids in her neighborhood did was hang out on the street corners. She organized mateadas, she got to know them, to understand their lives in the city, to propose projects. Soccer was a point of union. She organized tournaments. First, she worked with the men, whom she considers the most abandoned by the community. Then she also approached the girls. Today all these activities have been articulated in the Cultural Center for Good Living, which she manages in her neighborhood.

To be walking, to walk to be

The Indigenous Women’s Movements for Good Living made its first appearance on the Argentine political scene in 2018, as a multinational organization that sought to make visible the triple oppression of which they are victims: ethnic, gender and class. This is how the sociologist Marina Mendoza explains it in her article “The Movement of Indigenous Women for Good Living. Interstices of a feminist, anti-extractivist struggle and for Plurinationality”.

But the story had begun a few years earlier in 2012, in a cultural center of the Qom community, in Rosario. There, a group of women of various nationalities and from different parts of the country proposed promoting a massive march to the National Congress to make their existence visible and the possibility of promoting Good Living as a possible development model. The First March of Native Women brought to Buenos Aires a bill for the creation of a Council of Native Women for Good Living. They got no response.

In the words of Moira Millán: “Living well is the right to food, to territoriality, to full spirituality. It is not a form of privilege that indigenous people deserve or create, but rather it is a right for humanity. Because we all have the right to breathe pollution-free air or enjoy a river. And at the same time, the river also has the right to circulate and continue to exist. Good living ended up being a utopia that makes us walk every day, marching towards and for the realization of that, ”he said in 2018 to Al Margen magazine.

The Second March was in 2016, after a massive meeting in Lago Puelo. From there they demanded the repeal of the mining code and the denunciation of the activities of soy production, deforestation and fracking in Argentina, whose main consequence is the water crisis.

In 2017, the March of Original Women organized the First Forum of Original Peoples, Genocide and Argentinization in Bahía Blanca. Representatives of the 36 original nations participated with the aim of establishing the bases to sue the State for its genocidal practices against the original peoples.

In 2018, 2019 and 2022, already constituted as a Movement, they held the first, second and third Parliament of Indigenous Women for Good Living. The last one was held in Chicoana, Salta. In the final document, they demanded that the Argentine State “declare and classify ‘chineo’ as a hate crime” and that it be “indefeasible.” Chineo is a colonial, sexist and racist practice of sexual violence against children and indigenous women. It is a systematic abuse by Creole men that still persists, especially in northern Argentina.

“I approached the assemblies that organized the 8M here in Rosario to make the Chinese visible, so that it is included in the proclamation,” says Romina, who this year was one of the speakers at the act in the Parque Nacional a la Bandera. From the stage, she denounced the terricide in our country due to the advance of extractivism.

“Our fight is against the violence to which our bodies and territories are subjected. We want governments and companies to take responsibility for what they are committing, because they do not understand that the territory has life,” she told La Cazadora.

From the Movement, Romina carries out an anti-patriarchal, anti-racist and anti-colonial struggle, but she does not call herself a feminist. Feminism, she considers, often does not stop to listen to the voices of the indigenous sisters. And this, without a doubt, is evident in the creation, in 2019, of the Plurinational We Want Ourselves Campaign, which demands that the National Women’s Meetings that are held every year in different parts of the country begin to be called Plurinational, and that they incorporate the LGBTQ+ community. However, this claim, which is gaining more and more strength, was not heard by the organizers and, not without tensions, this year two Meetings will be held: one Plurinational and Dissident in October; and another National and Women’s in November.