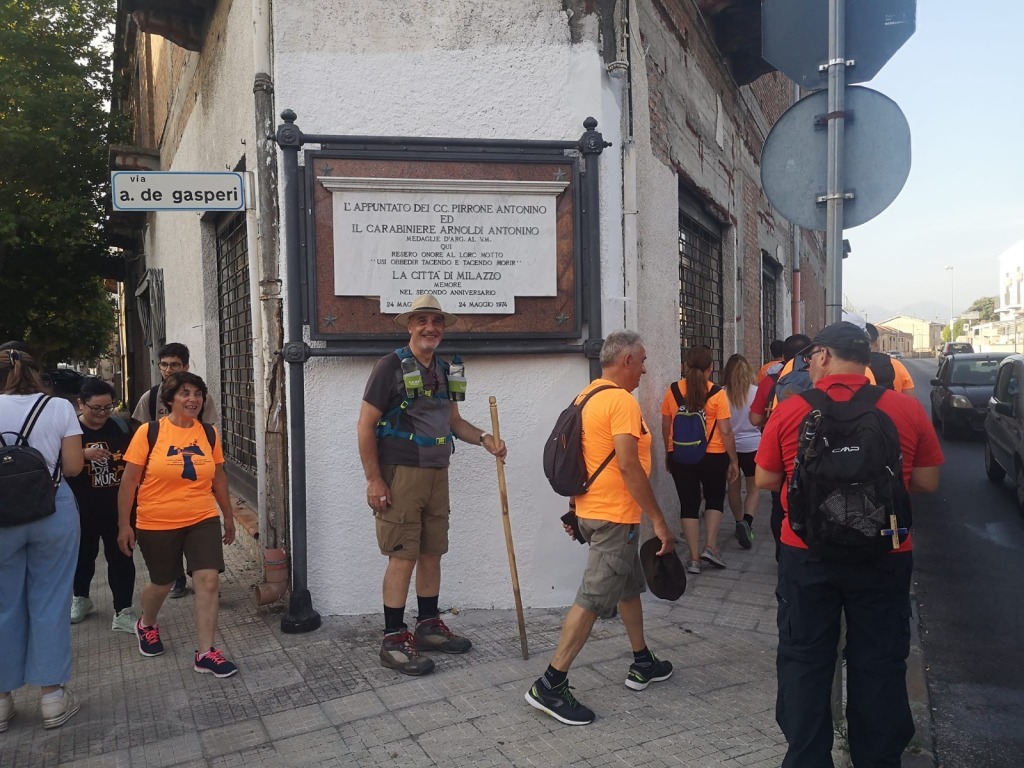 A religious journey that sees together in the Messina area “Walking with the Peloritani”, “Harmony of the Spirit”, University and diocese

SICILY – In the footsteps of Sant’Antonio. 800 years ago the Portuguese Fernando Martins de Bulhões landed on the coast of Milazzo, landing in Italy. 800 years ago he became a Franciscan and chose the name of Antonio. Today, in the name of Saint Anthony of Padua, the project “Walking with Saint Anthony” is renewed. After the break due to the pandemic, he resumed the relay race of about 1,800 kilometers on foot from Capo Milazzo to Forlì and Padua, according to the route taken by Sant’Antonio. It is a project promoted by the Antonian and Franciscan communities.

A religious journey that brings together, in the Messina area, the association “Walking with the Peloritani”, the “Harmony of the Spirit” review, the University and the diocese.
In each interested region, cultural, spiritual and religious events are organized, linked to individual aspects of Antonian spirituality. In Sicily, from June 26 to July 3, the historic shipwreck in Milazzo is remembered, where, according to a reconstruction, Antonio’s Italian years began.

From Milazzo to Messina with the relic of Sant’Antonio

Today, just from the beach of Milazzo, the journey on foot and the pilgrimage in stages begins. Anticipated by a few days of events in Milazzo and Messina, the three days in Sicily are carried out by a small group of pilgrims and by those who intend to join. Always in the backpack a relic of St. Anthony, delivered from time to time to the Christian community of the host country until the restart.

The 2022 Way in the footsteps of St. Anthony has as its ultimate goal the 9th of October at the Basilica del Santo in Padua. It is covered by a small group of pilgrims in 92 stages, but from time to time other walkers can also join for short distances.

The film yesterday in Messina

For the occasion, yesterday, in the multimedia room of the Cristo Re Institute of Messina, the film “AD 1221 – Antonio’s first journey” by Michele Carpinetti and Roberto Massaro was presented, on the initiative of the friars of the Basilica del Santo of Padua. In evidence the first journey of the friar and the figure of him are flanked by images and words of a contemporary pilgrim, in an evocative parallel between 1221 and contemporary problems.

The initiative in Messina was presented by Filippo Cadili (member of the pastoral tourism team), Pasquale D’Andrea, president of the association “Camminare i Peloritani”, Father Giovanni Lombardo, Pompeo Volpe (University of Padua), Filippo Grasso , delegate of the rector of Messina to Tourism and university lecturer, the director Roberto Massaro and the journalist, moderator of the confrontation after the film, Antonio Tavilla (all in the photo in evidence).

Pompeo Volpe (University of Padua) underlined: “The idea is to restart the journey from Capo Milazzo, where Antonio was probably shipwrecked, according to tradition and not according to historical sources. We reconstruct this path, assuming the path up to Assisi. The film was born from the idea of ​​suggesting possible thoughts of the young Antonio, who actually left nothing on this. An interesting aspect, in the biography of the saint, is to imagine what he did when he, starting from Milazzo, he crossed the peninsula, moving from Calabria and Basilicata to Assisi “.

“The longest path in Europe”

Roberto Massaro, on the other hand, recounted the work in the script and direction phase: “Michele Carpinetti and I had a secular approach. We tried to imagine what Antonio might think, following that path, and in parallel, we thought how we can approach a modern pilgrim today. We retraced the practicable part of the path, looking for passages and places in line with that path. At the base there is an initiative to build a path: the goal is to recreate an economic and social fabric for those who recognize themselves in this path. And we are talking about the longest path in Europe: 1750 kilometers ”.

“Towards a digitized tourism”

For his part, Professor Filippo Grasso, delegate of the rector of the University of Messina for Tourism, highlighted: “I am pleased to be present because this project is in line with the path we are pursuing with Harmony of the Spirit And Walking with the Peloritani. The University is present in these initiatives and gives its scientific contribution to the various paths. This of Sant’Antonio has its roots in tourism and in correlation with the next Jubilee of 2025. It is religious tourism, in line with the diocesan pastoral care of tourism, which had the task of drawing up the project, in collaboration with Harmony of the Spirit, Walking with the Peloritani, Universities and other institutional bodies of the city. The specificity is the religious one ”.

“As the University of Messina – explained Grasso – we intend to carry on the Way in relation to the entire metropolitan area. But there is more. Next year the national tourism experts have identified a theme on which to make all of Italy work together: digitization. The paths will be digitized, allowing even those who cannot participate to be present. Let’s not forget the issue of accessibility for people with special needs “.

With “Harmony of the Spirit” the promotion of the territory

And how does Father Giovanni Lombardo live this type of project? “I represent the review Harmony of the Spirit, which promotes art, culture and spirituality for the diocese. In addition to concert and cultural activities in general, we are dedicated to promoting the area, the historical, natural and landscape beauties, especially the Peloritani Mountains. The goal is to make known many beautiful realities unknown to most “.

“Videos and news reports, in collaboration with Walking with the Peloritani and in synergy with the University and other realities – added Father Lombardo – they are aimed at encouraging this cultural promotion and dissemination. In particular, for years we have been working in support of the initiative of the Way in the footsteps of St. Anthony and we have proposed it for the Atlas of the routes of the Sicilian Region. A welcome proposal. This journey brings together places and spaces of memory, such as churches and sanctuaries. For example, in the sanctuary of San Francesco all’Immacolata, Sant’Antonio lived for some time ”.

Pasquale D’Andrea, president of the “Camminare i Peloritani” association, focuses on the mission of his organization: “That of creating paths and enhancing this reality, making it known more and more. The Peloritani are little known and we have many paths, from spirituality to beauty as themes, which we are carrying out. We have given support, in relation to this Way of St. Anthony, in synergy with other organizations to enhance the naturalistic and religious aspects. We enhance local realities and create an economy “.

INFO:
No registration is required to participate in the initiatives and / or the walk.
Logistics, accommodation and meals are not the responsibility of the organization.
All updates will be posted on the official site and on their respective social channels. For information: info@antonio2022.org.

In the footsteps of Sant’Antonio: on the way from Capo Milazzo and Messina to Padua