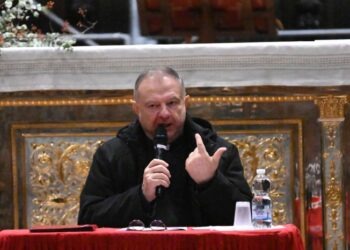 Ten years after the death of the Cardinal, in the Basilica of San Magno, to open the “Week of Catholic Cultural Centers”, a moment of meeting with Monsignor Angelo Cairati.

Legnano –“Lamp at my steps is your Word, light on my path“, so says thetomb epitaph of Cardinal Carlo Maria Martini, in the Duomo of Milan, is a verse of Psalm 118 very dear to him.

Carlo Maria Martini (Turin 1927, Gallarate 2012) was Archbishop of Milan from 1979 to 2002. A pastoral itinerary characterized by a strong spirituality never separated from one certain concreteness. Reflect on his magisterium pervaded by desire to combine Christian principles with the difficulties of the present time that’s what he wanted to give away Archbishop Angelo Cairati, Provost and Dean of the City of Legnano, to those attending the Basilica on the evening of Monday 21 November, opening evening of the “Week of Catholic Cultural Centres”, introduced by Professor Maria Teresa Padoan. 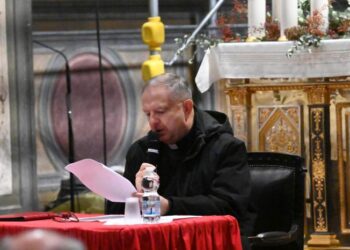 Monsignor Cairati tells of Cardinal Carlo Maria Martini as: “an attentive person and assiduous editor of the Word of God, where listening is capable of being transformed into thought and thought into action. The Archbishop – says Monsignor Cairati – he was not a mere commentator on Scripture”.

In this almost intimate excursus with the Cardinal, with whom he spentor twenty-two years of priesthood- we remember that Monsignor Cairati was one of the first deacons ordained by Martini in 1980 and a presbyter in 1981.

Monsignor Cairati remembers Cardinal Martini as a: “shepherd aware of his responsibilities, simple in his daily life, sometimes shy, though capable of attentive listening”.

It will indeed be there‘”I listen” to lead his pastoral life, for “educate” and “lead”, with a Word of God – reads the passage chosen by Monsignor Cairati “On the way to marriage. Aid for entertainers” (2000) where the Cardinal wrote: “listened to, explained, prayed for and oriented towards a concrete experience”.

His way of living concretely can also be well translated into his episcopal motto: “Pro veritate adversa diligere”: for the sake of the truth don’t give in to adversity, on the contrary, make them a moment of relaunch of one’s life.

Cardinal Martini was much loved and respected by the Milanese, because Bishop active in city life, in fact, his is remembered presence on the site of the Lainate disaster in which 118 people died. “He was fifty-three years old when he entered Milan, welcomed as per tradition in the Basilica of Sant’Eustorgio – recalls Monsignor Cairati – and, in his mission in the city, he experienced the killing of Vittorio Bachelet. Those were then the years of Piombo and Martini celebrated the funerals of other victims of terrorism such as the judge Guido Galli and the journalist Walter Tobagi, but he also began a dialogue with the detained terrorists.

Martini then brought people of faith and others into dialogue, promoted openness to interreligious dialogue and lived through the year of the collapse of the Berlin Wall (1989) when he found himself reflecting together with Protestants, Catholics and Orthodox on the theme “Peace in justice ”. He was never an ambitious but concrete man ”.

“The Magisterium of Cardinal Carlo Maria Martini speaks to today and to our communities”, declares Monsignor Cairati, making four of Cardinal Martini’s teachings his own: there School of the Wordthe Lectio Divina of Scripture, La new liturgy of the Hours (Diurna Laus), there care of homilies, intertwining the Word of God with the concrete life of every man.

Next appointment, Friday 2 December with the former Minister of Justice Martha Cartabia, at 21, in the Basilica.

Born and raised in Legnano, she has been interested in the old stories of her city since she was a child. By collaborating with the editorial staff of Sempione News, you can make this passion a daily reality.

In the footsteps of Cardinal Martini with Monsignor Cairati, to concretely live the present | Sempione News