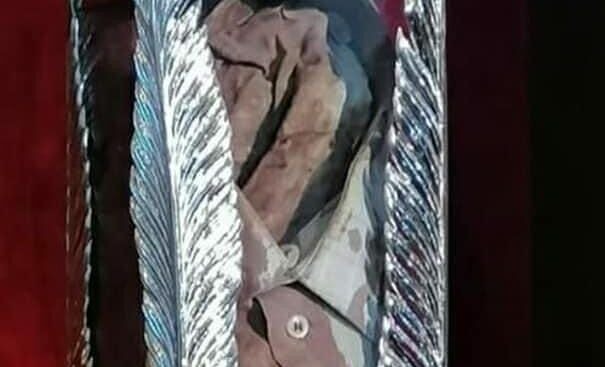 In Rome, the institutional power pays homage to the blessed judge Livatino. That’s right. This was announced today on the front page of “L’Osservatore Romano” which talks about the white shirt worn by the Canicattinese judge Rosario Livatino when on 21 September 1990 he was killed by the mafia along the road between Canicattì and Agrigento. Shirt turned red due to his blood and therefore become a very precious relic, especially after the beatification of May 9, 2021 in the cathedral of Agrigento, where it is usually kept. Shirt which is already in Rome and which from tonight January 14, and for the seven days successive, begins in the capital, a solemn “pilgrimage” which will first of all touch on the most important institutional places of our Republic, from the Chamber of Deputies to the Senate, to the Superior Council of the Judiciary, not only that! it will also have other moments especially in the parishes with visits by students from various Institutes, and also to follow an exhibition and two conferences.

The “peregrinatio” – as the Vatican organ writes – was officially presented by a special committee set up by the organizers of the Archconfraternity of Santa Maria Odigitria dei Siciliani in Rome.

And again, as “L’Osservatore Romano writes, the display case bearing the inscription Sub Tutela Dei will stop in various parishes and districts of the capital, to give the opportunity to many students to stop in front of the relic and meditate on that ideal that animated the young judge Livatino, for which he offered a luminous testimony, committing his whole life , up to sacrifice. We record in this period also in our parts, in the land of Agrigento, a period of reflection, attention, meditation and prayer; especially in Canicattì, where at certain times, a certain controversy, after the beatification, on the relics and above all on the transfer of the body, really seemed to be on clearly opposing positions. Surely – it really seems to me – that providentially no one thinks anymore about the transfer of the body, which is currently located in the family chapel in the Canicattì Cemetery, to one “clashinstitutional between the Curia and the Municipality. Everyone understood well the noble motivation that made one thinkprivileged burial”, as the greatest sign of recognition, of Livatino in the Cathedral Basilica, Mother Church of the diocese. Which, just out of supreme respect, suggested that “it would have been desirable and preferable”, the Cathedral as a place of transfer of the body. In this way – it was thought – that the recognized sanctity of the baptized Canicattinese would better become a gift for the whole Church, from Agrigento and beyond.

But, apart from the unfavorable reaction, with unanimous vote, of the City Council, now in an advanced synodal climate, it seems that also in the Church in general (including that of Agrigento!), a different and perhaps better attitude is emerging.

We are more inclined to look at the particular sensitivity of the place where a vocation has matured. In the sense that one is more open to accepting and respecting the particular sensitivities of the place where one’s personality and spirituality has matured. And there is no doubt that even among our countries, … for example Agrigento, Favara, Canicattì, Ravanusa etc. etc. if we want to be objective, there is a way, at least”slightly”, different to embody, practice, live the faith; and form, shape one’s own personality and spirituality.

And Livatino, his human and Christian personality formed and matured him in Canicattì; certainly under the influence of the great Franciscan friar, now venerable P. Gioacchino Lalomia, who has had such an impact on the social fabric, and to whom all Canicattinesi are devoted. In short, Judge Rosario Livatino, even though he went to Agrigento every day for his work, felt that he was from Canicattino, and he never wanted to leave Canicattì, like his whole family. And in the parish of St. Dominic he lived his journey of faith, asking for Confirmation as an adult, after having regularly attended (when he was already a judge!) the preparation course reserved for adults.

In Rome, the institutional power pays homage to the blessed judge Livatino – AgrigentoOggi

Madonna, Tokisha and the Silence of the generations advance towards the Moral grave
Città della Pieve, national premiere presentation of "The luminous mystery"
Seen from Varese: After the dark, the expectation of a new light grows
Tweet
Share
Share
Pin