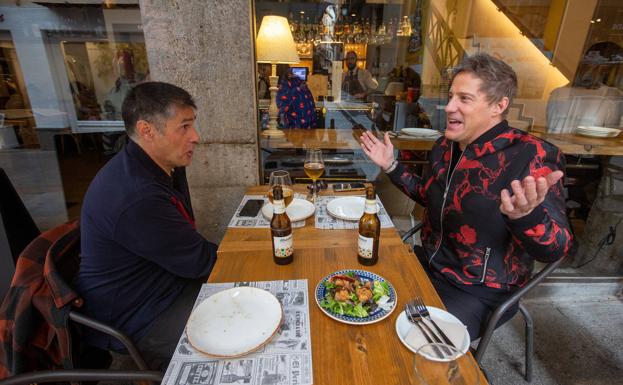 Ernesto Estrella reviews the different cuisines of the world that he has tried. / alfredo aguilar

An Alhambra with Ernesto Estrella

Ernesto Estrella lives halfway between Granada, New York and Berlin. He reflects on the Goblin, also in the kitchen, and declares himself a lover of rice dishes

Since we don’t know each other personally, we meet at La Telefónica, an establishment equally unknown to both of us. So everything is new. Ernesto Estrella has been in Granada for a few weeks, back from New York. Throughout our talk we talked about the divine and the human, that nothing in this world (or in others) is alien to this Renaissance man, a true wandering star.

-How about your return to Granada?

-Good, good, but I still haven’t gotten used to this street life in which breakfast is confused with beer, lunch, the snack roll or dinner. (Laughter).

–He comes from New York, where he has been working with the concept of the Goblin…

–That’s my idea: take Duende beyond where it was born, between flamenco and gypsy. It was a concept that interested the intellectuals of a century ago, contrasting it with the Angel. Lorca theorized about it in a very delirious and interesting way.

–What is ‘El Duende Talks’?

–A festival that I have organized in the center of Manhattan with the support of Trinity Church, the oldest in New York and with a strong desire to open up to the Spanish-speaking community. For me, the Duende can emerge in any field: fashion, humor, spirituality, gastronomy… It’s about working with the tools that make it possible, talking to see how the conditions for its appearance are created. It is a project in progress and in continuous transformation.

How would it be applied in gastronomy?

–We would have to ask a benchmark of Spanish cuisine in the United States, such as José Andrés, what inspires him, how the Spanish gastronomic tradition influences him to create his dishes. How he gets the Goblin to show up even on down days. With the Duende, memorable events are achieved from ephemeral moments. It is impossible to recreate them, but it is possible to create the conditions for it to appear. It is a concept that applies perfectly to gastronomy: the dishes disappear, the flavors fade, but if the Duende has emerged, the memory remains.

–How is your day-to-day gastronomy in New York?

“No one cooks there. You eat out a lot or take delivery. There is so much offer and so many different cuisines that you always discover new flavors. There is a new neighborhood, Little Spain, in the Hudson Yards area, with a very interesting gastronomic market like the one in San Agustín.

-A lot of! In fact, yesterday we ate a delicious rice with lobster in the Granada market. The most authentic seems to me to be the one in Almería.

-Is it very bars and bars?

-Absolutely! Sites like La Brujidera, Tocateja or La Tana. But I miss the spontaneity of before the pandemic. Now there is a kind of hierarchy that makes me long for the democracy of the conversation of yesteryear, when the barriers of age or social conditions were broken. There were some beautiful meetings. Ideas arose. The Goblin! One of the pillars of Mediterranean democracy is lost. The closure of historic and charming cafes like Lisboa also hurts me. I don’t like franchises or neo-taverns, with that aggressive light.

–A lot. In Berlin, when the weather is good, it is common to drink it in the parks. The Paulaner or the Stenberg, the mountain of the star, which is very close to me (Laughter). I also like single malts and Cretan raki; spirits that open the sense of community.

–Another project about Juan Ramón Jiménez took him to Puerto Rico. Do you recommend it?

-Yes! Its great restaurants are Spanish. I ate the best Creole food, with Galician and Cantabrian heritage, at La Casita Blanca. In San Juan, with echoes of Cádiz: Casa Manolo, El Chotis de Ávila and El Coco de Luis. On Fridays, the typical thing is to go to the market square, where salsa is danced. Although it is being lost and there is more and more reggaeton. Of course: my favorite genre is the milonga. In fact, in NYC I have a milonguero trio with Leo Genovese and Chiavassa.

“I miss the democracy of the bar counters”