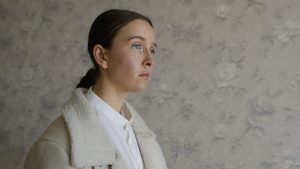 The white color is by definition the absence of shades, synonymous with purity and spirituality, but at the same time it can evoke rigidity and firmness. In the short film directed by Giorgio Ferrero, Happy Birthdaythe special closing event of the International Critics’ Week, is the clearest nuance of all to act as a significant background to the actions shown.

It is February 28, 2022 and in a small apartment located on the outskirts of Moscow, Bianca is about to celebrate her twenty-two years. Born in Norilsk, Siberia, one of the most polluted cities on the planet, the shy young woman is part of a group of young people from all over the world who gather around a podcast channel broadcast on Radio Esperanza Libre and created by the environmental speaker Argentina, Anita Lopez.

But Bianca for the digital world is Electa, performer of passionate dance performances in which she expresses the cultured inspiration to the protagonist of “Le Sacre du printemps” by Stravinsky, from which she inherits the rituality and the coagulation of bodily energies of characterizing expressiveness. One person, two completely different ways of being: in real life, Bianca is closed in her own cocoon of inadequacy and inability to relate to others; in her alter ego her Electa, on the other hand, she is free, casual in photographing herself, in expressing her youth and sharing it with others.

If initially in the duplicity represented by this dual nature, the more daring part seems to prevail over the other, it is the latter that completely absorbs all the force that the other I actually transmits. It will be the network of virtual connections created by Electa to save Bianca, helping her to redeem herself and to vent the will to live that a young woman of her age should vehemently express. Thanks to Electa, she casually meets Anita and with whom she shares her environmental commitment and, curiously, her particular date of birth, namely 29 February. What better occasion than a shared birthday to record a special podcast? A celebration 2.0. of a date that in 2022 becomes shortly before the Russian invasion of Ukraine and therefore the carefree moment of connection, she turns into an excellent opportunity to cry out for help.

Bianca’s story is potentially that of many and many other young people belonging to generation Z, a compact generation perpetually poised between the hyper-connection given by the great technological evolution and the undoing of an inherited reality that seems to have no way out. They are sons and daughters of the climate emergency, of war, of the crisis and with a whole series of problems that they will be able to face by adapting to change and making the most of the potential of connections and of the rediscovered collective social consciousness.

Made entirely through video calls and chat, in constant connection and never trying in person due to recent historical developments, Happy Birthday it has in its totality, of content and of filmic structure, all the right intentions which however remain semi-hidden behind the brightness of the optical white of the images.