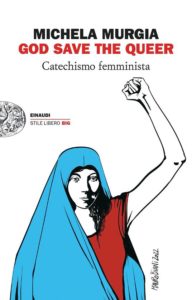 The last literary effort of Michela Murgia has as its title God save the queer-feminist catechism (Ed. Einaudi, Stile libero series, page 152).

After Ave Mary, the well-known Sardinian writer tackles the controversial relationship between feminism and religion with a refined dialectical verve and feels the overwhelming need for “understand which aspects of life and spirituality are truly irreconcilable as they seem and above all whether these aspects are truly foundations of the profession of faith and not a historical legacy that must be re-discussed every day in the light of the Gospel and one’s own intelligence. As a Christian, I trust that faith needs a feminist and queer perspective because revelation will not be accomplished until every single person is offered the opportunity to feel the generative gaze of God on him “.

The essay is not addressed only to believers but to all those who want to reflect on these issues overcoming prejudices and preconceptions in order to feed doubt and stimulate the mind towards alternative reflections.

We from Mydreams we followed a meeting with Michela Murgia organized by the UBIK libraries for Connessioni.

What was the genesis of this essay?

“I thought that contradictions should not always be resolved indeed, a well-known writer whose name I don’t remember now, asserted that answers kill questions. On the themes of the book there is still no univocal answer and therefore it is better to stay with the questions and underline their complexity. Any answers are subjective and linked to our experience. The way I believe is mine alone and so is feminism. The conflict between a believer and a militant has always been emphasized. But the Church is not a monolith. There are also numerous in the Church currents like a political party. There is the pre-conciliar current, the progressive one, the one linked to tradition and still others with varied and dialectical positions that also influence the popes who are at the top of the same Church. I too have had experience in Catholic Action and many Italian politicians come from it such as Scalfaro, Bindi, Prodi ».

The book is imbued with spirituality and even in the most advanced feminism there is not much talk about this aspect.

“Sor that the book will have a political interpretation while I have spoken extensively about spirituality. Many see religion as a political fact while spirituality as something that affects our private sector. This duality has no reason to exist. I have changed a thousand times with respect to God and Christ. The Gospel has always surprised me and I have had different interpretations depending on my age and my background. I claim the spiritual aspect and the need to talk about it. There is the prejudice that believers are less conceptual even in the educated left. There is the fear of speaking of God because of his right hand and his motto: God, country and family ».

How is it possible to reconcile the terms catechism and feminism?

“I envy the practicing Jews who fight us for a thorough knowledge of the Holy Scriptures. We do not know them fully and have doctrinal knowledge that is often misleading. Christ even seems opposed to marriage and not to divorce, so much so that he never got married! Anyone for Christ is a father, sister, brother, without any discrimination, in gender equality. No parent would have wanted a child as open and problematic as Jesus and I remind you of the episode of his voluntary removal to go to the Temple and take care of his Father’s things. Marriage has been sacralized by the Church, becoming a sacrament but not everyone knows that it is the spouses who are the ministers and not the priest who only blesses the union. Even the concept of the family has changed over time because the model on which it was based failed because it was based on a high degree of coercion: indissolubility and perpetual fidelity. Obviously this model allowed the certainty of the offspring and the attribution of the inheritance by the children ».

What do you think of the word irreverence?

“I’ve never used this word in my book but being irreverent doesn’t necessarily mean disrespecting others. We are more used to being reverent. There are more and more people with flexed knees. One can offend God and be respectful of hierarchies and vice versa. I think of the President of the Fontana Chamber who thanks God while the boats with hundreds of thousands of refugees remain at sea and do not dock in safe harbors ».

What is the relationship between the terms power and demand?

“Claiming puts us in a position of inferiority. Power is not asked for but you take it. I am thinking of the claims of black rights in America. In English there is an untranslatable term in Italian: empowerment, i.e. the conquest of self-awareness and control over one’s choices, decisions and actions, both in the sphere of personal relationships and in that of political and social life. The feminist movement has favored this process. Personally I am doing things without asking anyone’s permission or in my writing I am using shiwa. Anyone who reads me must stumble upon those words, so to speak. I am obsessed with the levels of power precisely because in this book I have given ample space to spirituality, speaking for example of the Trinity which I perceive as a not triangular but circular power ».

What about the term fable?

“IS It is necessary to envisage different endings of a story and to put a certain contemporaneity before stereotypes. If you know only one story, you don’t have the ability to enter other worlds. Children have to live in a house with many doors and windows that open to the world ».

Will there be an opening of the Church towards women? Will the feminine and feminism be welcomed?

“The feminine was welcomed in the figure of the Madonna, the no to women as ministers was reiterated by Paul VI and then by John Paul II. A certain liberation theology has taken place in Latin America. It is not certain that there are no male chauvinists on the Left“.