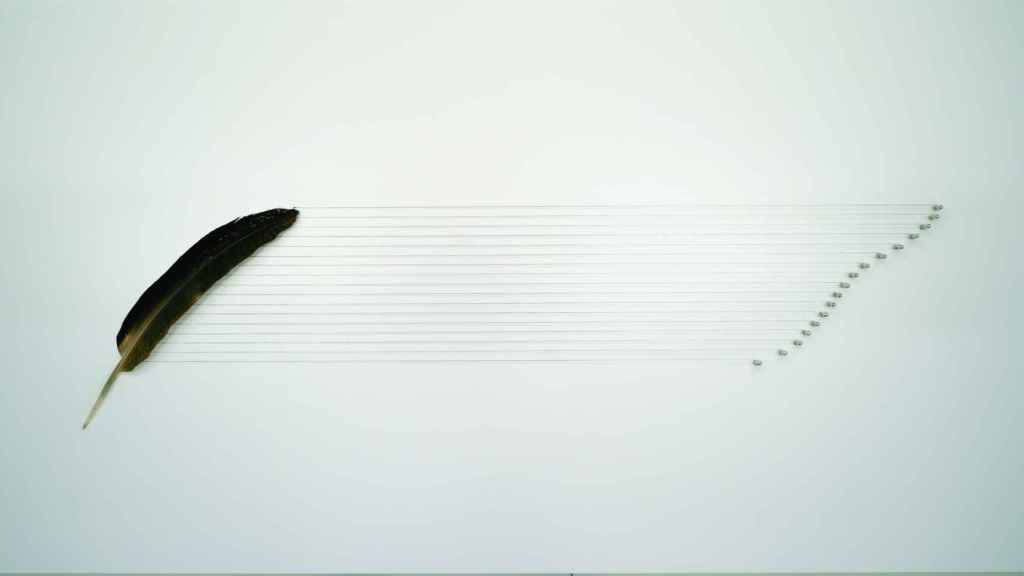 As a trace of the silence in the confinement, we have been left with the echo of “listening” that today stars in the rhetoric of politics, also cultural, as a beginning for dialogue in a shared, more horizontal and democratic forum. But that we often appreciate that it multiplies in abstruse chatter without results. More noise. Meanwhile, loneliness in isolation and calm in internal dialogue continue to be underestimated. How are whispers read?

Now that the incessant noise has returned, I would like it to be read to me like a murmur, a text populated with blank pauses, to talk about the latest exhibition of Glenda Leon, Time is a sound we don’t hear.

A poetic proposal between sound and silence that immerses the visitor in a sensitive state of consciousnessthrough a set of works of a sculptural and performative nature and a marvelous series of concise and very elegant drawings.

The oldest piece, the sculpture silent ascensiona staircase with rotated staves as steps, reminds us that this interest in sound and silence comes from afar to the Cuban artist Glenda León (Havana, 1976), who began her training in classical ballet, and who in the 55th. Venice Biennale in 2013, she participated in the Cuban Pavilion with the piece Music of the Spheresa score superimposed on the solar system, where each planet became a musical note.

Two years later he would present at Madrid slaughterhouse the unforgettable video installation every breathwith images of the earth, the sky, fire, the forest and the sea that, to the rhythm of breathing, evoked our communion with the world in which we live.

In this new series, produced in the last two years, also the firmament of Madrid, the sea and the rain become sheet music, with strings of violin, guitar and harpsichord, which were performed on the afternoon of the opening by the group neopercussion.

Even the fluttering of a butterfly and the feather of a bird are stretched with strings in a musical pattern that intensely challenges our haptic sensitivity to look and listen that, in the Western philosophical tradition that León studied, takes us to a plane of ascension. vertical, spirituality and light.


The piece deserves a special mention listening to the moonwith very handcrafted cowhide drums that go through the lunar phases, insinuating the silent nocturnal sounds and the rhythmic slowness in the dreamlike and half-awake night, where we become small again and get lost.

Glenda León, music with sculptures and drawings in the sky of Madrid