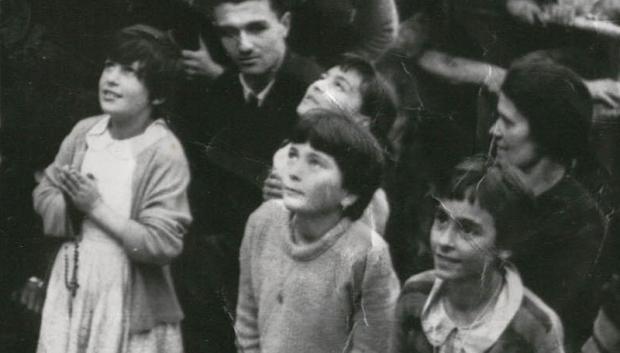 On October 18, 1961, in the village of San Sebastián de Garabandal, in Cantabria (Spain), a message was heard that was allegedly transmitted by Our Lady: “Many sacrifices must be made, much penance. We have to visit the Blessed Sacrament often. But first we have to be very good. If we don’t, there will be a punishment. The glass is filling up, and if we don’t change there will be a very big punishment ”.

Witness of those times when four little girls – Conchita, Jacinta, Loli and Mari Cruz – spoke with the Virgin, whose last message, on June 18, 1965, had a tone of greater urgency – “before the glass was filling up, now it is overflowing “- is the current parish priest, Father José Rolando Cabeza, who assures that the message of Garabandal is consistent with the Christian faith, but also that that call to conversion has fallen on deaf ears:” There is a wave of ingratitude and religious bewilderment for ideologies that threaten ecclesial communion “:

As the years go by, what’s left of the message?

That message of penance and sacrifices, of visiting the Blessed Sacrament, and not even of being very good, has not been put into practice, because money, the desire for profit and the “discords” of religious ideologies have somewhat adulterated that message. It was a question of serving the Virgin, and at the same time money and the proliferation of religious mentalities that have nothing to do with the greatness of the Gospel of Jesus and ecclesial doctrine.

Does the neutrality expressed on the alleged apparitions by a pontifical commission in 1992 still apply?

The Church is very prudent and very sensible. If you knew the whole problem closely, perhaps you would be even more rigid, seeing many who speak ill of the Pope, defining him as antichrist, a Mason, and who receive Communion after having done so. People from here or who come, and among them also some priests and religious.

What are you referring to when you say that no one leaves Garabandal empty-handed?

To the fact that people who come with good intentions and with a serious spirituality always receive inner peace, as a surprise of the spirit.

However, suspended traditionalists also come a divinislike Richard Williamson (one of the three bishops consecrated in 1998 by Monsignor Lefebvre), another Italian who is suspended latae sententiaeof the priests of our diocese who dedicate themselves to personal needs based on the apparitions… For these people I am the devil’s advocate, because they are in communion with the diocesan Church and through this with the universal Church.

Is the praise of the message of Garabandal made in 1965 by Bishop Eugenio Beitia still valid, when he expressed ecclesial neutrality after the end of the alleged apparitions?

Yes, because he asks to be good and this does not go against anything, not even the last message, which spoke of what must be corrected in the Church.

The second is more sensitive because people try to be able to accuse someone?

Yes, this is how you shirk your responsibilities. I insist that people forget the second message, saying that when we die God will not ask us what a Pope was like, but what we are like. Why are you so worried about what the Pope is like? Worry about who you are.

How to guide those who come to Garabandal “unprepared”?

When they come, ask for the parish priest. We must be prepared for different behaviors and groups of people who try to sow ecclesial doubt and bewilderment. In Los Pinos, collective acts of piety cannot be organized, because the image of the Virgin who is there is not recognized.

To those who manipulate the apparitions, I say that one cannot serve God and money, and that one cannot be good believers if one is not in ecclesial communion, in which one tries to live in a community of love.

Aren’t the clergy of the diocese of Santander overly skeptical of Garabandal?

Everyone will have their own way of thinking, but they are not critical, but tolerant and respectful. People live in the present moment, which is not very promising.

Did the message fall on deaf ears?

Yes. People hear the messages like they feel it will rain. There is no change and conversion. Money and ideological confrontations have done a lot of harm. As one seer said, when people stop believing, the warning will come. As Jesus said, the Son of Man will come when you least expect it. There is nothing new, it is all written in the Gospel.

What do you think of those who come in search of extraordinary phenomena?

People try to see fireworks, show, and then forget. Is it normal for the Virgin to speak to the visionaries every day in places like Medjugorje? There is a lot of religious tourism, because tourism brings money. Here there is national and foreign religious tourism.

And who collects signatures for the archbishop to recognize the apparitions?

It is not a subject of my competence, and you can find out from various sources, but not from me. We need groups and movements that promote ecclesial communion under the gaze of the Virgin as on the day of Pentecost.

Do you suffer from this lack of unity?

Obviously as a priest and a deeply believing and Marian man, I suffer because the greatest desire of a Mother is to see her children united to the Lord, the blessed fruit of her womb, and to form starting from him the great church that he wanted to found.

The story of Garabandal can be explored in the book by Santiago Mata Silencio en Garabandal: the precio paid for the Virgen. Madrid, 2018, Freshbook, 312 pages.

“Garabandal’s message is Christian, but it remains unfinished because there is a wave of ingratitude”