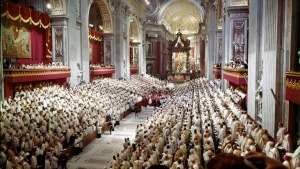 Pope Francis is seeking to spare the Church both the “backward ideology” of refractory opponents of the Second Vatican Council, and the headlong rush of those who take the “synodal path” of the Church of Germany for a wasteland for experimenting with various utopias.

While still seeking to prepare for the future of the Church, the pope wants to thwart both a rigid and ignorant schismatic tendency that has become quasi-integrist again, and an ultra-progressive and infidel deviance, which carries out hazardous interpretations of the teaching ecclesial. Francis recently made this diagnosis for a Jesuit magazine: ““Restorationism” has come to gag the Council, he notes. The number of groups of “restaurateurs” is impressive. An Argentinian bishop told me that he had been asked to administer a diocese that had fallen into the hands of these “restorers”. They had never accepted the Council. There are ideas, behaviors that stem from a “restorationism” which, fundamentally, did not accept the Council. The problem is precisely this: in certain contexts, the Council has not yet been accepted. » However, he recalls with serenity: « It takes a century for a council to take root. We still have forty years to make it take root…”

However, concerning the ultra-progressives, often more or less engaged in forms of neo-Protestantism, the pope also declares having confided, not without humour, to the president of the German Episcopal Conference: “There is a very good Evangelical Church in Germany. We don’t need two…”

It takes a century for a council to take root. We still have forty years to make it take root…

On this point, in addition to his dual personal Ignatian and Franciscan spirituality, it is worth recalling Francis’ attachment to a deeply Marian and Theresian popular piety, which was once denounced by some in Argentina as… quasi-integrist! Himself a guest of Germany in 1986 to study the work of the Bavarian theologian Romano Guardini, he became a follower of the cult of the Virgin of Augsburg, Maria KnotenloserinMarie “who unties the knots”: back in Buenos Aires, he recommended her to his Argentine compatriots faced with difficult situations…

In his eyes, regarding the centrifugal tendencies of the Church today, “the problem arises when the synodal way comes from the intellectual and theological elites, and is very influenced by external pressures…” However, the Pope notes that in Germany ‘there are many pressure groups, and under pressure it is not possible to discern’.

Nothing but the council

Like most of his predecessors, in particular his main master Paul VI whom he now declares “prophetic” and who was then called the “torn pope”, but also John-Paul II and Benedict XVI, Francis must steer the boat of Peter by preserving her from these two pitfalls of immobilist tension and confused agitation: he seeks to spare the Church these two errors, both of which are sterile, for the choice of true ecclesial fruitfulness, the living Tradition which reconciles fidelity and openness. In this spirit, he too chose, like his predecessors since John XXIII, to apply the Second Vatican Council, but the real council, the whole council, nothing but the council, in this real fruitfulness.