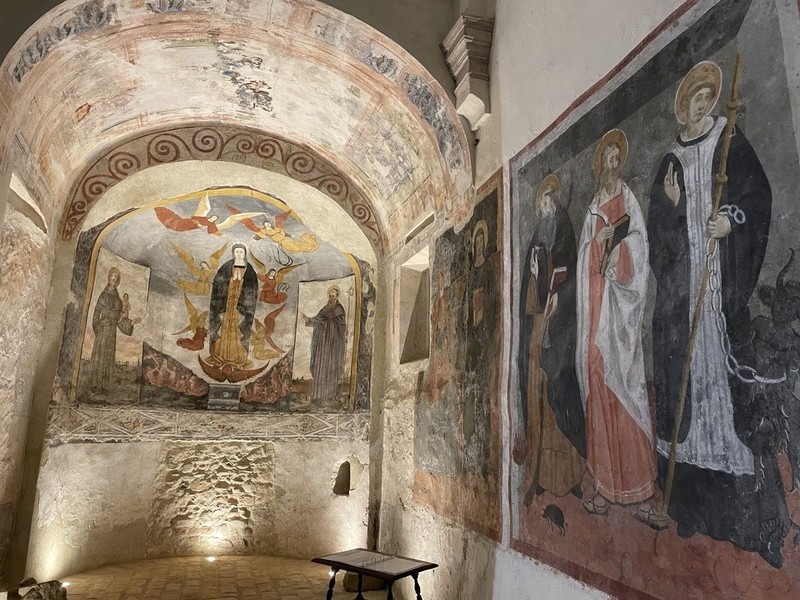 At Monastery Benedictine of San Biagiothanks to the contribution of Piemonte region, a series of events and activities of a cultural and aggregative nature will take place, with the aim of making the monastery known to the territory and allowing the territory to access cultural initiatives that normally take place in large cities. The title of the review takes up the fourth part of the rule of St. Benedict (Ora et labora et lege et noli sadariin laetitia pacis), so that a place of the spirit, such as the monastery, can become a space of consolation for the worries of daily life, connecting the spirit to the eternal through a cultural journey, proposing three double appointments, built on the interweaving of visions and dialogues between music and the word.

The journey began with the words of Paul Rumiz (October 18, preview of the Festival), looking to the past to trace the present, which told the Infinite thread which has kept Europe intact thanks to the connections and the work of the abbeys, to arrive at the re-reading of the founding myth of Europe, rewritten in the feminine in mixing myth, travel, history and mystery. The history of Europe and the roots of the monastery resound in the concert of Gregorian singers(December 10, 6 pm) and the rediscovery of the profile of Saint Benedict, one of the symbols of Christian Europe.

In the second date, the voice of women is heard loudly, through the harmony of the voices of Cecilia Lasagno And Paula Bertello (November 26, 6 pm) who re-read the extended territory of Provence, leaving room for linguistic minorities where troubadours, countesses, nurses and millers tell about themselves and the world of the time, voices of women who resound in the book of prof. Maria Theresa Brolis(December 16, 6 pm) Stories of women in the Middle Agesliving and concrete presences, whose existence, reconstructed thanks to first-hand sources, help to represent a complex female universe, narrated with identification and liveliness.

In the third and final round, the incredible voice of Antonella Ruggiero (December 4, 6 pm) takes us by the hand and leads us to explore sarharmony, a space of sacred music from all over the world, a spiritual flight that traces the path of the soul in the continuous search for its purpose, the deepest and most intimate meaning of existence. The encounter with the voice and songs of Antonella Ruggiero hardly leaves unchanged, and in the capacity for transformation it is also the cornerstone of the encounter with Luca Mercalli (December 3, 10 am) who will guide us on a journey starting from the encyclical Laudato Si towards the relationship with the earth, nature, the ecosystem that surrounds us, focusing from the detail of the Monastery – inserted in the Crava – Morozzo Nature Reserve – up to daily habits, investigating how over the centuries the relationship between man and nature has changed and how the world has changed in relation to this.

The ancient Benedictine Priory is a medieval building, the first mention of which dates back to 1014. From 1461 until 1869, the assets of the priory remained the property of the Church of Monregalese. In 1675 it became the parish church of the hamlet of San Biagio. It was later reduced to a farmhouse. In 1973 it returned to being the seat of a monastic community and center of spirituality by Father Filiberto Guala who remained there until 1984. In July 1985, a new phase began in the life of the monastery of San Biagio, with the arrival of Clelia Ruffinengo And Catherine Conio. It was established in the same year the Madonna della Fiducia Associationwhich supports the Ente Centro di Spiritualità which existed since 1974. San Biagio becomes a place open to interreligious dialogue, in the wake of monastic spirituality.

After the experience of Father Guala and the community of nuns, since 2020 the San Biagio Monastery is the new headquarters of Casa do Menor Italia Onlusan association founded in 1996 to coordinate aid and be a point of reference for the many Italian and foreign supporters who support the activities of the Casa do Menor São Miguel Arcanjo in Brazil, an organization founded by Father Renato ChieraMonregalese priest who for more than 40 years has been in the most violent suburbs of Rio alongside the “meninos de rua“. The decision to move its headquarters and activities to the Monastery follows the indication of the founder to expand its activities on the territory. 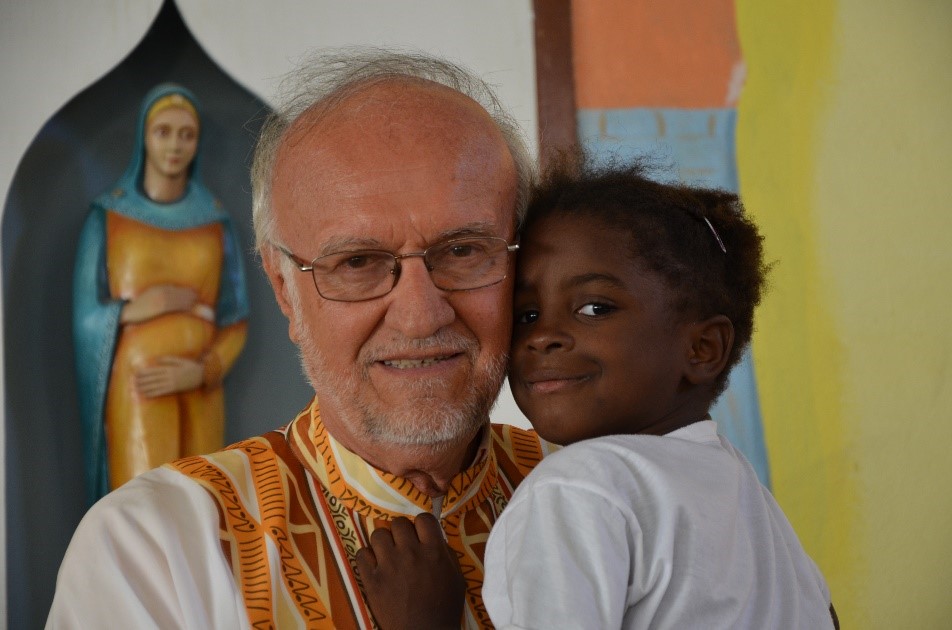 In fact, over the years a strong attention to the territory has also grown, through support and help to families in difficulty, up to the collection of aid for the Ukrainian population through the project which saw Casa do Menor as the leader of a network of 26 common. Among the objectives of the reopening of the Monastery of San Biagio, in addition to the spiritual and cultural vocation, there is therefore the intention of becoming a cultural space of proximity, and a territorial garrison of listening and support for people in fragile conditions, such as indicated by Father Renato: to be a close and familiar reality, founded on Presence, Reception, Encounter.

The duo made up of Paola Bertello (singer and researcher) and Cecilia Lasagno (harp and voice) proposes a popular concert that traces the history of the minority languages ​​of Europe through a heterogeneous repertoire that extends from thirteenth century female courtly poetry to song contemporary in the Catalan language. Troubadours, countesses, queens, nurses and millers become patron saints of minority languages, transmitted in their poetry and song as “mother” languages, a means of expression of original and rooted thoughts and cultures. From the love affairs of the trobairitz of the Provençal area – the medieval troubadours, aristocratic and cultured women, poetesses and musicians – to the story of the Dama d’Aragò, from the traditional Cinquettii of Rossinyol to the monophonic songs of the Cantigas de Santa Maria, the concert will transport us to places and ancient and rare spaces.

Praised yes. Humanity and nature, the story of a difficult relationship – Luca Mercalli

Pope Francis with the encyclical Laudato si’ has launched a loud cry. The problem is that everyone shouts but nobody listens. With these words Luca Mercalli starts the reflection on the encyclical, through the reading of a lay researcher on the care of the common home. In fact, the climate is a precious asset, indeed, it is a common good and as such it must be protected. With the meteorologist and climatologist, president of the President of the Italian Meteorological Society, we will reflect on the urgency of acquiring awareness of the extreme situation generated by our behaviour, on the responsibility in our daily actions and on the need to achieve, at the same time, virtuous daily choices and thoughtful long-term choices. It will not be a coincidence that these reflections arise within a monastery, which constitutes a small community of people, and which wants to adopt a model of ecological sustainability in direct relationship with nature and with the Crava – Morozzo Nature Reserve on which it stands .

Sacrarmonia is a journey through the contaminations within sacred music from all over the world. Antonella Ruggiero, reinterpreting pieces of international music and her repertoire, proposed this project live in more than one hundred theaters and churches in Italy and abroad, accompanied by the Arké quartet and Ivan Ciccarelli. The listener is placed in a state of total suspension, in which the mind and body are enveloped in intense sensations to the point of canceling the daily efforts, abandoning oneself to a musical meditation of breath and notes. Attention is also paid to the sacredness – almost magical – of the voice which interprets both the more traditional compositions of the liturgy, such as Ave Maria and the Sanctus, while the Kyrie of the Missa Luba and the Gloria of the Misa Criolla – respectively African and Latin American – tell of the changes and transformations that Catholicism has encountered in the countries where it has arrived. Sounds also come from India and in Frate Sole Saint Francis is remembered as the closest, among the examples of our religion, to the mystic and enlightened figures of oriental cultures. We are all under the same sky.

The centenary of the death of St. Gregory the Great (604-2004) offers a significant starting point for reflection on the decisive contribution that this illustrious personality was able to provide not only to the ecclesial institution, but to the entire Western culture. In him medieval spirituality recognized an absolute point of reference: the very chant of the liturgy, even if not composed by him, receives authority by the very fact of being defined as “Gregorian”. And it is precisely Gregorian chant that strongly recalls the figure of St. Benedict, who in the first half of the sixth century began the extraordinary monastic experience, an area in which Gregorian chant took shape and was kept as an invaluable treasure of the Church and a symbol of unity of all Christian Europe. It is no coincidence that Gregory is concerned with writing a “Life of St. Benedict”, not to trace a historical profile, but to point him out with insistence as a “man of God”, discovering a humanism that essentially promises to be a “total reconstruction of man ” and that such it was in the fruits it reaped throughout Europe. The program proposed here alternates pieces from the Gregorian repertoire – referring to these two giants of the spiritual and cultural tradition of the West – with recited fragments taken from Gregorio’s literary work “Life of St. Benedict”.

Women on the run, rebellious lives of the Middle Ages – Brolis Maria Teresa

It is through the consultation of wills, sales contracts, testimonials, lists of names, notarial registers, lists of poor that Professor Maria Teresa Brolis unravels a history of women in the Middle Ages. Medieval historian, she collaborated with the Catholic University of Milan (where she graduated) and with other Italian and foreign research centres, conducting studies on the religious and social life of the XII-XIV centuries, with particular reference to monasticism, the new orders religious, hospital care, confraternities, the condition of women and women’s biographies. In his book Stories of Women Maria Teresa Brolis rings portraits of women who have entered the myth, such as the enigmatic Hildegard of Bingen, the learned Eloisa, the refined Eleonora of Aquitaine, Clare of Assisi, the surprising Christine de Pizan, the rebel Joan of Arc, placing alongside them portraits of “ordinary” women, but no less interesting for this. Giovanna, a repentant usurer, Ottebona, wife of an exiled Guelph, Bettina, a healer investigated by the bishop’s vicar for her suspicious arts, Belfiore who decides to go on pilgrimage to Rome in the midst of the plague of 1350, and still others: living and concrete, whose existence, reconstructed thanks to first-hand sources, help to represent a complex female universe, narrated with identification and liveliness.

All events will be held at the Monastery of San Biagio, Strada di Morozzo 12, Mondovì. Limited places, free admission – reservations are required on 0174 698439. It is recommended to always arrive at least 15 minutes before the event.

“Festivalis et noli contristari”: a review of music and words at the monastery of San Biagio Mondovì