ANCONA – This afternoon the evocative procession of boats, organized after two years of pandemic by the Stella Maris with a great message of peace and hope. The party will continue with the Blue Night until late in the evening and will end with the expected fireworks display – PHOTO / VIDEO

«The sea is important to us all. Maria Stella del Mare, be a strength for anyone who works with the sea and for the sea. And may this moment be a time of sharing and prayer. Marked by spirituality and great charm because every time the sea has something to tell us and to tell us ». 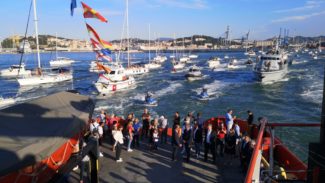 It was Don Dino Cecconi, chaplain of the port to introduce with a nice speech the traditional procession of boats in the sea, organized by the Stella Maris, this afternoon in Ancona. Departure and arrival point of the boats is the Molo Santa Maria.

Don Dino also invited everyone to look out to sea to open their horizons and hearts. «This is also a great opportunity to reflect and progress in our sea of ​​life where each of us is sailing. The sea fascinates us and gives us inner peace ”he stressed without forgetting to commemorate the many who died in the sea, including the workers who were victims of recent accidents at work. In thanking all the civil and military authorities present, the port chaplain then hoped that the mass for the anniversary will also be celebrated again in 2023.

Archbishop Angelo Spina who led the religious procession, instead recalled the importance of the gift of the sea, «created by God and placed in our hands. Today we are responsible for its custody. It is up to our responsibility, to that of those who hold the reins of politics and the economy, to protect it. The sea is also wealth – said the prelate – and our thoughts go to all fishermen, a difficult job that today is not always treated well, to all those who work on the sea and live from the sea with the many activities, not excluding that. sporty”. Highlighting the importance of being welcoming to those who come from other shores, the archbishop of Ancona-Osimo therefore asked to address the Madonna a request for protection: “It is she who in the dark of the night shows us the direction and when to he feels agitated by the waves she gives firmness and hope ». There were moving moments with the blessing and the throwing of the laurel wreath into the sea in memory of the fallen, the scream of the boat sirens.

Even the admiral Enrico Moretti he recalled how «the port of Ancona is significant for all the people of the Marches because it generates development even with its shipyards. We must remember those who lost their lives in the sea, the men and women who work in the maritime sector with the aim of generating economic and environmental development and in this direction we will spend our energies more and more incisively “. And the councilor for the port Ida Simonella in recalling the loss of seafarers in 2022 “which touched the Ancona community”, he received the archbishop’s message of hope and peace. “It is important after coming out of the three years of Covid and for the difficulties that families and businesses are now experiencing due to the wars in progress” he commented

The party, returned to its splendor after two years of pandemua, continues at 7.30 pm on the staircase of the Muse theater with the mayor Valeria Mancinelli who will greet the city and the participants, before the start of the free concert of the Marchigiana Fisorchestra . For the occasion, the certificate of civic merit, assigned on the occasion of the feast of San Ciriaco 2022, will be given to Admiral Enrico Moretti, who was unable to take part in the ceremony on May 4th. Tonight the Blue Night will start and it will be possible to enjoy aperitifs and themed menus organized by the bars and restaurants in the center and visit. There are numerous and varied menus and proposals from the participating establishments that are arriving in these days to the organizational staff of the Municipality, with proposals between 15 and 25 euros. During the evening Corso Garibaldi will also host a market of artistic and typical craftsmanship and shows by street artists, which will occupy ten stations distributed in different points of the center, with jugglers, acrobats, musicians, magicians and other artists.

At 9 pm in Piazza del Papa, during a meeting with the author, the book “Porto e città. The economy of the sea in Ancona from Unity to 2000 ”by Roberto Giulianelli, dedicated to the history of the port and the port economy of the last two hundred years, which sees the sea as a key to interpreting the territory. The author, lecturer at the Faculty of Economics of the Polytechnic University of Marche, examines Ancona and its relationship with the Adriatic in the contemporary age: merchant exchanges, fishing and shipbuilding are the three key sectors of an economy which from the Middle Ages, on the one hand it forged the local community and, on the other, it constituted the most faithful and identifying expression of the same community. Reconstructing the paths followed by these sectors and measuring their weight both in the Italian and in the international scenario, represent the objectives of an investigation that spans a century and a half of history, relying on a large bibliographic survey and a deep archival excavation.

The Pinacoteca will also be open and the exhibition Things from the other world – from Monet to Warhol will be free admission from 15 to 22. A few hours after the announcement, all the bookings for the formation of groups to visit the exhibition had already been collected. an international exhibition from the rich collection of the Johannesburg Art Gallery, inaugurated on Saturday 28 July.
But the highlight of the festival will be represented by the return of the highly anticipated and traditional fireworks display scheduled at 11pm at the Porto Antico, at the end of the programming of the shows of the Adriatic Mediterranean Festival. The Degli Archi, Cialdini, Traiano and Umberto I car parks will be open, at normal rates, with the possibility of entry until 11pm. The exit can take place at any time through the automatic cash machine. The users of the parking degli Archi will be able, in the usual way, to use the bus to reach the center free of charge.

back to home Page

Feast of the sea, Archbishop Spina: “We must protect him and we are responsible for his custody” – Chronicles Ancona