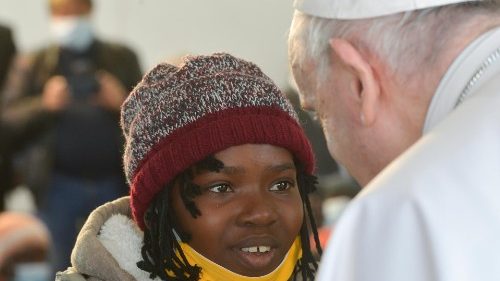 The 108th World Day of Migrants and Refugees will be celebrated on Sunday, September 25. The president of the Astalli Center for Refugees, the Jesuit priest Camillo Ripamonti, illustrates some of the priorities related to this year’s theme. He hopes “that the spiritual charge brought by many refugees will be a real stimulus, so that Europe rediscovers this youth, these Christian roots which characterize the continent”.

“Building the future with migrants and refugeesis the theme chosen by Pope Francis to celebrate the next World Day of Migrants and Refugees, which takes place as every year on the last Sunday of September. An opportunity to show concern for the different categories of vulnerable people on the move, to pray for them as they face many challenges, and to raise awareness of the opportunities offered by migration.

In his message on the occasion of the 108th World Day of Migrants and Refugees, Pope Francis invites not only to welcome migrants but also to value their …

To start building a future with migrants and refugees, Fr. Camillo Ripamonti believes, it is imperative to start seeing them as people and not as numbers or statistics. “They are individuals who have the right to be valued in order to contribute to the construction of a society that is a place of life for all.“, he says, calling for a change of perspective of society and, in particular, of the political world, so that “we stop seeing migration as a problem and instead start to see it as a gift that allows us to look to the future“. In reality, these people, says the Jesuit director of a reception center in Rome, the Centro Astalli, “bring wealthboth culturally and spiritually, in addition to their skills. “This is an element to be taken into account more and more“, he adds.

Immigration is often presented as a remedy for a country’s declining population or lack of manpower. Is a utilitarian vision of immigration likely to prevail in this way?

This is an approach that must be avoided at all costs, because as soon as we realize that immigrants are no longer useful, we will kick them out. In reality, the right to be present in our societies is linked to the right of human beings to move around the world, in the global society that we have built. The presence of migrants is important for our societies, it promises a multicultural and multi-religious future.

Pope Francis’ message for this day of migrants and refugees also speaks of stimulating the spiritual aspirations of host societies. Is this still possible in a secularized continent like Europe?

I believe that it is precisely the spirituality that migrants and refugees bring that can shake us out of our secularism, our worldliness, and in a way push us to reflect on these Christian roots that we so often evoke. Dialogue is built on each person’s personal identities when we listen to each other. And so, I believe that the spiritual charge that many refugees and migrants bring with them can really be a stimulus for our old continent to rediscover this youth, these Christian roots that characterize us.

As the Day of the Migrant and Refugee celebrated by the Church next Sunday approaches, the Holy Father invites young people to be “protagonists of the future” in a video …

But the times we live in are characterized by tensions and conflicts, people fleeing and hundreds of people losing their lives trying to reach the shores of Europe…

The title of the message of this 108th Day reminds us that with migrants and refugees, this is no longer an option, and that we must invest in policies not only of reception, rescue and rescue at sea. We we must never forget that people must also have the right and the possibility not to leave their land and, very often, the causes that make them leave are linked to the exploitation and injustice that we cause.

In these difficult times, how important is it to learn to empathize with the lives of refugees?

It is fundamental. Putting yourself in the place of refugees and migrants allows you to look at the world from a totally different point of view. We have experienced this in recent months with the Ukrainian people, broken by a war which is on their doorstep. We thought that what was happening to them could happen to us and it sparked a different kind of solidarity. This same solidarity must also apply to wars that are taking place far from us, to people fleeing injustices that seem far from our lives.

Father Ripamonti: with migrants, the future is built – Vatican News