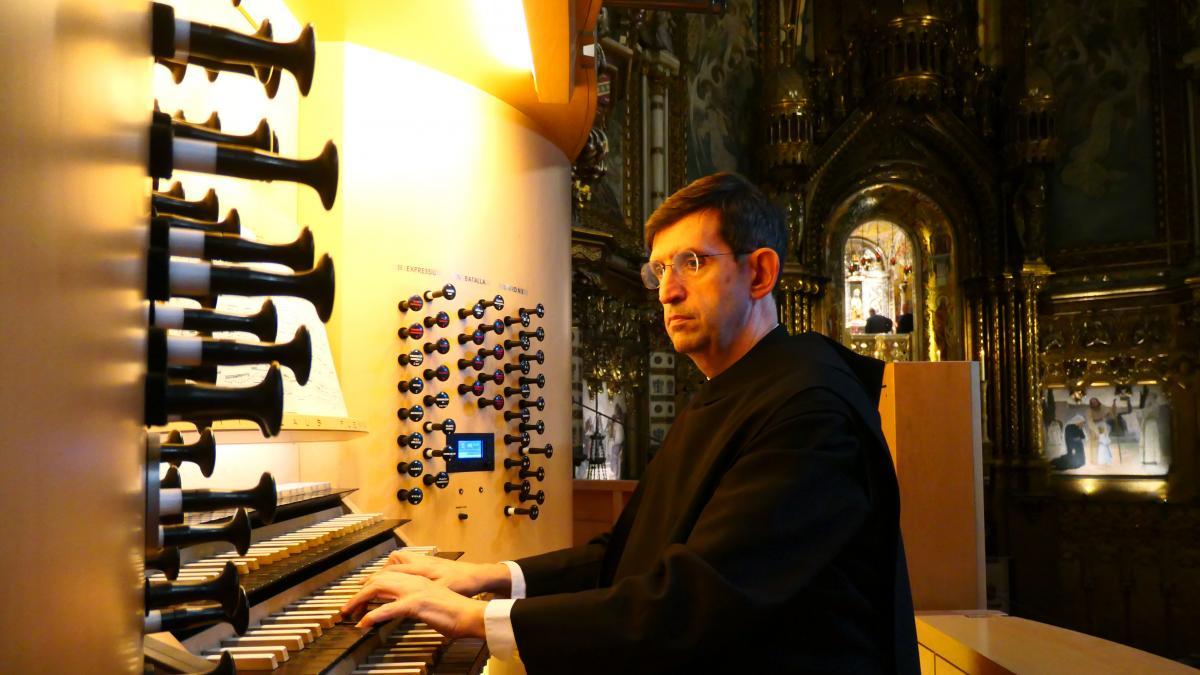 Music and faith; Culture and spirituality are themes that revolve around this conversation with Father Jordi-A. Piqué i Collado, monk of Montserrat, organist and doctor in Dogmatic Theology who currently presides (dean) the Pontifical Liturgical Institute in Rome.

He holds the chair of Liturgical Theology Marsili Chair and has composed the Mass Locus iste, which premiered in San Juan de Letrán, the cathedral of Rome, on November 9, 2022, performed by the Cor Cererols directed by maestro Marc Díaz i Callau.

How was the process to compose the ‘Locus Iste’ Mass?

The title of the Mass takes the first words of the entrance song of the Dedication party: “This place” is sacred, the place where God will meet his People. The work was commissioned by the Cardinal Vicar of Holiness from him for the city of Rome to celebrate the anniversary of the Dedication of the Lateran, which is celebrated on November 9 according to the Roman calendar. He asked me for a Mass where the assembly could sing the proper parts of the mass in Italian and, on the other hand, the parts of the ordinary (Kyrie, Gloria, Credo, Sanctus, Agnus) could be more elaborate and in Latin. The work led me to compose a complete mass, with all the parts sung, combining the modality that comes from the Gregorian, the polyphony that is part of the Roman tradition and a broad and contemporary treatment of harmony. The result was liked and well received; some told me that it had helped them to pray.

The Mass was preceded by the singing of Compline by Fr. Joan Cererols (1618.1680). You defined it as “a liturgical prayer to introduce the celebration, in the typical form of the Catalan baroque”, what unites religion with music?

Effectively; the Mass was preceded by a concert-meditation with music by Father Cererols (1618-1680), a monk from Montserrat. His work is of great quality and internationally known; perhaps more valued outside than within our borders. It served to create a climate of serenity and beauty that made us understand the high value of music -when it is sincere and of quality- for the experience of faith. It was a beautiful display of the musical potential of the School of Montserrat. All this, the concert and the Mass were possible thanks to the collaboration of the Government Delegation of the Generalitat in Italy-Rome and the Abbey of Montserrat.


Precisely, you are a Benedictine monk from Montserrat, where music has a great tradition and importance, with the Choir. What is special about Montserrat on a musical level?

Montserrat has had culture as one of the main axes of its mission. Faith goes hand in hand with culture. The Benedictines built Europe from culture and agriculture. Music has always been part of the cultural work of all peoples. For this reason the Church adopted it for the liturgy. Montserrat has managed to generate a high musical production linked to culture. The Montserrat school of composition is part of the history of music. This has led the Choir to be the cradle of illustrious performers and composers. Its history is centuries old. Maestro Díaz, who directed the premiere of the Mass, as well as some of the singers from the Cor Cererols, trained at the Choir of Montserrat.

Music has always been part of the cultural work of all peoples.


How does music accompany spirituality?

In a broad sense it can be explained from the immateriality of sound that merges with the vibrations of the soul. In a Christian sense, especially in the liturgy, due to its intimate relationship with the Word of God. The singing of the Word makes us participants in the very life of God. Hence, musical expression is essential for the experience of faith. Today we are witnessing a recovery of what we could call religious music. All the new Christian movements are characterized by their own musical forms. For this reason, we cannot forget the need to cultivate and value the liturgical musical heritage of our history.


Your musical composition was premiered in Rome, what did it mean to you?

The premiere of the Mass Locus iste during the celebration of the Lateran Dedication Feast, it was a challenge. The space is enormous and making a place steeped in history like the cathedral of Rome, the cathedral of the Pope, resonate is not an easy task. The second challenge was to find a language that was contemporary, but at the same time understandable. The third, how to make quality music that would allow the active participation of the assembly. When the entrance song and the first chords of the Kyrie sounded, I understood that the challenge had been overcome. A bishop sitting next to me asked me: “Are you the composer?” I replied with a little fear: “Yes, Excellency.” “Well, congratulations”, he answered me. At that moment I thanked God for having been able to fulfill the assignment.


You are president of the Pontifical Liturgical Institute of Sant’Anselmo in Rome, what is this experience giving you?

I would say a universal and very lively vision of the Church. At the Institute we have students from all over the world. And it is seen every day as what in Europe is a problem, in Asia it does not exist; where there is weakness, elsewhere is strength. A dynamic that does not depend on human efforts. All this in a very serious and demanding academic environment where collaboration between the faculty and interaction with students is essential. The passion for the scientific study of the liturgy is what unites all these aspects.

What is a problem in Europe does not exist in Asia; where there is weakness, elsewhere is strength


This institution has notable graduates, some of the most relevant curial positions in the liturgical field, what is the importance for the modern Church of keeping a university like this active with a secular tradition and with various lines of study, such as philosophy, theology or liturgy?

The Pontifical Istituto Liturgico was erected by the holy Pope John XXIII in 1961. It was entrusted to the Benedictines who governed the University of San Anselmo. This allows a dialogical action between the different subjects. From the dialogue of the liturgy with Theology arises the specialty of Sacramentary; From the dialogue with philosophy and history, the Institute for the History of Theology emerged. Today we open ourselves to the study of art, architecture and music from the liturgical point of view. This allows us contact and collaboration with the civil university in Italy and also in Europe and America. This contact with students from other universities is giving very good results at a scientific level. Collaborative projects are great exchange opportunities between teachers and students. The future is very promising.

What would you highlight about the figure of Pope Benedict XVI?

His ability to search, study, preach the truth about God and about the great questions of existence. His great erudition led him into an open dialogue with the great thinkers and theologians of the 20th century. You have to take time to read his work. Only after reading it can one realize the dimension and the intellectual and Christian stature of Pope Benedict.

The great erudition of Benedict XVI led him to open dialogue with the great thinkers and theologians of the 20th century.


And how is the papacy of Francis living?

With great dynamism. The recent document Desiderio Desideravi on the need for liturgical formation at all levels, sixty years after the liturgical renewal of the Second Vatican Council, obliges us to seek new forms and new paths to face the challenges of how to communicate to God today and how to live and be formed by the liturgy at the present moment.

How do you see the future of the Church in the 21st century?

For us Christians the future is in the hands of God. I like to tell my students, paraphrasing Saint Augustine, that “now” is not allowed for us men and women today. We constantly live between the past and a future to come, while God is the eternal “now.” In the past we can see the work of God in our lives; in the future we will be able to see the action of God in the today of our existence. That is why we must act at all times and at all levels so that this future is possible.

We constantly live between the past and a future to come, while God is the eternal “now”


Will music always have its place in the Church?

It has always had it and if we want to be faithful to the song of the Word of God, it always will have it. The question is in the quality. If we let the banal enter our celebrations, history will judge us for irresponsible. If we know how to value the heritage of the past and not relegate it to museums or concerts and we know how to create a quality contemporary musical heritage, time will recognize our efforts.

■ HOW CAN I PARTICIPATE IN THE LA VANGUARDIA COMMUNITY?

“Faith is linked to culture”

Castle, village, churches and ancient residences: Monteodorisio opens its doors for the Fai d'Autunn...
VGO Associates, the Collectible Design Gallery, incubator of talent and spirituality
Our selection of spiritual books for the start of the 2022 school year
Tweet
Share
Share
Pin