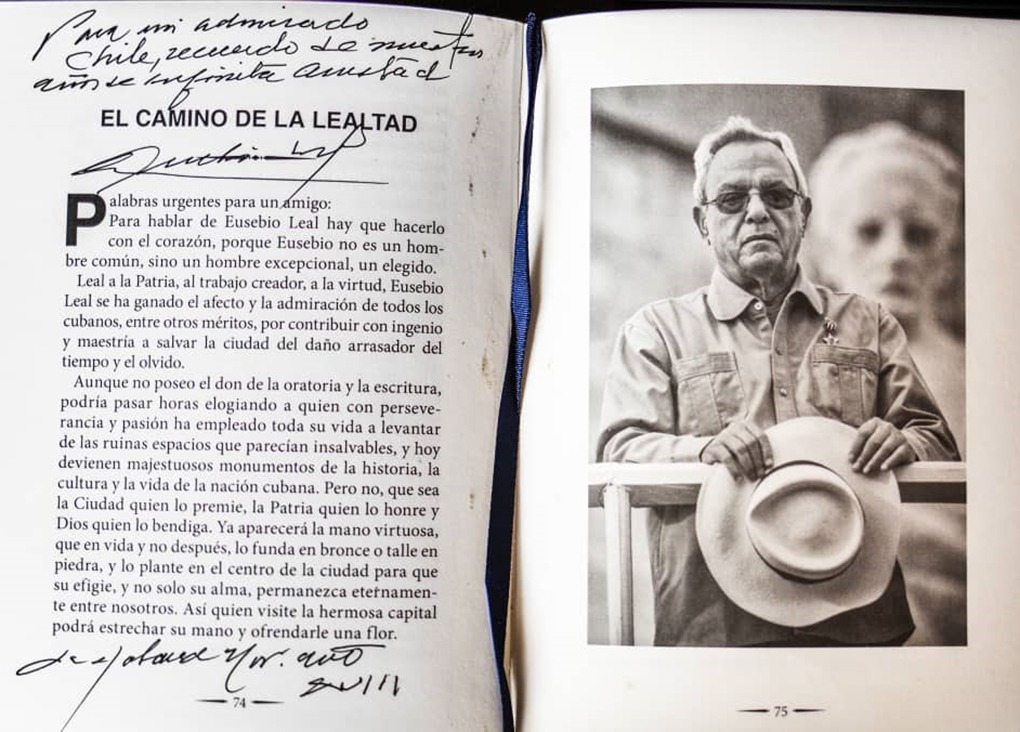 There is a photograph of Eusebio Leal Spengler that symbolically summarizes the mission of his life and work. It is not a posed image nor is it gestural, although the sitter seems to have noticed the camera lens. Everything indicates that it is a snapshot taken with a telephoto lens. The figure of the City Historian predominates with all his details, while behind him the giant effigy of Martí can be glimpsed in the Plaza de la Revolución, although blurred and blurred by the blur.

Leal Spengler is already graying his hair, and since the sun doesn’t bother him, he has taken off the Jipijapa hat that he had been wearing for a few years to protect himself. Although the wrinkles on her face reveal accumulated fatigue, her eyes reveal a certain joy from her inner gaze. She wears the insignia of the Labor Hero of the Republic of Cuba on the left side of her chest; the flag with the gold star stuck to her gray garment. That act on May Day 2013 marks a before and after in her life trajectory. That is the true background of this image that has now gained iconic meaning after his physical departure on July 31, 2020. That is why he presides over the Hall of Honors at the Eusebio Leal Spengler House.

Roberto Chile, the author of this emblematic photo, had a brotherly relationship with Eusebio; a diaphanous and spiritual relationship at the same time. Both professed mutual respect as holders of the same privilege: having shared moments of great historical significance, each from his personal perspective. For many years, from 1982 to 2016, Chile was the personal cameraman of Commander in Chief Fidel Castro Ruz, accompanying him on his trips to Cuba and abroad. He later dedicated himself to the visual arts as a professional photographer, documentary filmmaker, producer and art curator. Serve this little interview to leave a testimonial record that cannot be erased by oblivion; the brief history of a photograph that will transcend us in time.

To what extent is the facet of the profession of cameraman implicit in your artistic work? How would you define your professional relationship with the visual image, both static and moving?

The way in which I face both tasks —filming and photographing— is similar, because I always do it with the same passion and the same artistic and aesthetic concepts, putting the eye, the mind and the heart on the same axis, as defined by the famous French photographer Cartier-Bresson. Without forgetting the differences between the still image and the moving image, I feel that my photos are similar to my videos and vice versa. My professional relationship with both disciplines is characterized by an incessant search for poetry. If I have found it I don’t know. I follow after her.

Although you have witnessed important historical events, recording them with the lens, you have always been very reluctant to any form of prominence. What do you consider to have been your personal contribution to the history of Cuba?

I have been, like many, a witness to important events in the life and history of our nation. I had the luck, and I could even say the privilege, of perpetuating crucial moments in the events of our country for years. My creative work, essentially as an audiovisual producer, cameraman and photographer, has been intense and diverse. But, without a doubt, the most meritorious of my personal contribution to our history was perpetuating for decades —camera in hand— Fidel’s trajectory at the head of the Cuban Revolution. Today it seems like a dream, but they were days, months and years of dedication to duty and work with the main mission of following Fidel everywhere without qualms and without fear. And so we did. And here we are.

I am aware of the affection and respect that you professed to Eusebio Leal. In the same way I know that he distinguished you with special consideration and affection. Could it be said that this mutual fraternity meets in your photo of Leal in the Plaza carrying the National Order of Hero of Labor on his chest and with the effigy of José Martí in the background? At that moment, did he know that you were taking that photo of him that today is a true icon?

I took that photo on May Day, 2013 at 8:43 am, during the parade of the Havana people in the Plaza de la Revolución. I was a few meters from Eusebio with a camera in my hands trying to capture everything. I looked at him, he looked at me, greeted me, I instinctively focused on him and took that photograph of him where he is looking inward and the effigy of Martí behind. That is one of my favorite photographs, because as you well say, it captures the mutual fraternity, and above all, the respect, admiration and friendship that I always felt for him.

A few days before his death, through his faithful collaborator and friend Magda Resik, I sent him the following message: “Dear Eusebio, in these hours more than ever we pray for you. You know how much we love and admire you. May all the lights of the world come to you. You are strong and virtuous, and believe it or not, you are immortal. No one is going to lose faith, except now. Until forever. Your friend Chile”.

Minutes later Magda replied: “I have just conveyed your message to Eusebio and he is sincerely moved.”

I have in my hands the book by Eusebio Leal with the title son of my time, published in 2013, having as a preamble an exergue by José Martí and a note by Fina García Marruz. A fragment of his farewell words to Antonio Bachiller y Morales has been chosen from Martí; from the great originist, a short but resounding text that summarizes the life history of the Historian of the City and that concludes with the lapidary phrase: “When men forget it, the stones will still remember it”.

Among the words of praise that, as Leal’s personal editor, I compiled for that book, is a short text with the title “To Roberto Chile”. These words first appeared in the catalog of your photographic exhibition Afro-descendants, Guanabacoa-Cubainaugurated on September 23, 2011 at the Fototeca de Cuba.

Now that Leal is no longer here, don’t you feel that those words of his have a current resonance? Could you “re-enter” that text and tell us what meaning it has for your performance as an artist and revolutionary?

Those words by Fina García Marruz synthesize the mark of Eusebio in his passage through life, and make it clear that his memory remains, not only in the memory of those who admire and love him, but also in every work that is erected in Havana, in the places restored under his tutelage, in the streets where he walked incessantly sowing love and beauty, making history.

I stop at the final paragraph of the words that Eusebio dedicated to the catalog of the exhibition that you mention, which I treasure among my most precious jewels because of the meaning they have for me: “In this book float reflection and smile, simplicity of the everyday, the search in the daily chore for the meaning of life. With an authentic and convincing expression, his images make up a universe of faith and spirituality, perceptible to those who, like Roberto Chile, are capable of love”.

“I will never allow hatred to victimize me, nor that the blows and vicissitudes of life sow feelings of resignation and loneliness in my soul.”

It is that Leal interpreted the essence of my work in this way, with which I have sought at all times to move, shake, transmit —as he affirms— faith and spirituality to awaken in others the love and tenderness that we all carry inside. This is how my work and my actions will be until my last breath. I will never allow hatred to victimize me, nor that the blows and vicissitudes of life sow feelings of resignation and loneliness in my soul.

Where in Old Havana would you take your grandson Adam —born just a few days ago— when he begins to understand that there is a world outside of himself?

First I will take you to Calle de Madera, the one that is at the entrance to the City Museum, former Palace of the Captains General, so that you can see and caress with your hands the bronze sculpture of our distinguished Historian who perpetuates it and puts it on to wander eternally through the streets of the city that he loved so much.

On September 7, 2017 I wrote these words that, although belatedly, came true: “The virtuous hand will appear, which in life and not later, founds it in bronze or carved in stone, and planted it in the center of the city so that his effigy, and not just his soul, remains with us forever. Thus, whoever visits the beautiful capital will be able to shake his hand and offer him a flower ”.

From there we will go to the Eusebio Leal Spengler House, located at Amargura street number 65 between Mercaderes and San Ignacio. I will go with my family in full; the one that has been by my side and always is and for which I am capable of giving my life. There we will breathe the air to feel up close the spirit of the most passionate defender of Havana: Eusebio, our friend Leal.