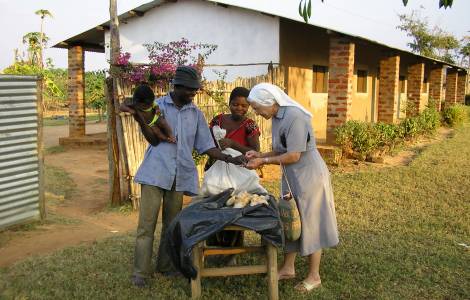 EUROPE/ENGLAND – The Secretary General of the PUM: “The example of Christian life and the proclamation of Christ are inseparable”.

London (Agenzia Fides) – Nurturing the missionary spirit: this was the theme of the speech by Fr. Dinh Anh Nhue Nguyen, OFM Conv, Secretary General of the Pontifical Missionary Union (PUM), Director of CIAM and of Agenzia Fides, who has opened the work of the National Assembly of the Pontifical Mission Societies (PMS) in the United Kingdom. The PUM General Secretary has opened the three-day event with an evening session on missionary spirituality. After an introduction to the English PMS to provide an overview of his work in the context of the local church, Father Nguyen continued his talk, beginning with the episode from the Gospel of Luke on the multiplication of the loaves and fishes. Taking the evangelical episode as a model, Father Nguyen has introduced the broader theme of a life lived in the sign of the mission. In addition, he has explained the missionary context of the multiplication of bread, the “whole” bread offered by Jesus, and the mission of the community of believers.
Then, taking Pope Francis’ World Mission Day 2022 Message as a reference, Father Dinh offered the participants of the English PMS Assembly some elements for reflection.
“A closer look at the words ‘You will be my witnesses’ can clarify some imperishable aspects of the mission that Christ entrusted to the disciples. The plural form of the verb underlines the communitarian and ecclesial character of the missionary vocation of the disciples – Father Nguyen commented -. Every baptized person is called to mission, in the Church and by mandate of the Church: consequently, the mission is carried out together, not individually, in communion with the ecclesial community, and not on their own initiative”.
The General Secretary of the PUM has addressed the indissoluble link between the example of Christian life and the proclamation of Christ: “One is at the service of the other. They are the two lungs with which every community must breathe if it wants to be missionary. This type of complete, consistent, and joyful witness to Christ will also be a force of attraction for the growth of the Church in the third millennium. word and deed in all spheres of life”.
Next, Father Nguyen recalled the charismatic origin of the PMS, as stated by Pope Francis in the message for World Mission Day 2022, and suggested to those present some specific topics to cultivate missionary spirituality in daily life. .
The Assembly continued with sessions devoted to the fundraising strategy, its analysis and the possible paths to follow, ending yesterday with the conclusions of the National Director of the English PMS.
(EG) (Agenzia Fides 23/6/2022)

EUROPE/ENGLAND – The Secretary General of the PUM: “The example of Christian life and the proclamation of Christ are inseparable”.