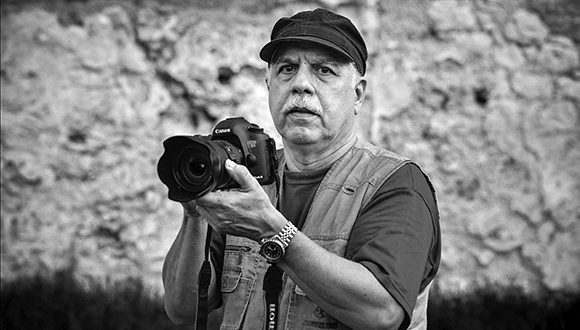 Roberto Chile is not wrong when he says that in his most recent exhibition, photography and poetry have left their mark. He goes to the verses of the French poet René Char to reaffirm it: “The poet must leave traces in his path, not evidence. Only footprints make you dream.” And such purpose is achieved, perhaps, if each image, if each verse, is kept in the affective memory and penetrates inside, like a refuge where the most diverse emotions are archived.

“Where poetry nests” is the title of the Chilean expo, open for two months at the “José Martí” National Library of Cuba and which has just ended. The exhibition is made up of twenty photographs of the artist taken in the last ten years and each image is accompanied by a poem. The exhibition opens with the verses of Chile itself in “Cauces”, a kind of desperate song, and then, the twenty poets.

Where poetry nests is distinguished by a great variety of genres and styles and the absence of a discursive unity. “The only way I found to string together the photos was poetry: twenty Cuban poets who, each one inspired by one of my images, wrote beautiful poems,” says Chile, adding: “the images and the poems complement each other; the poet interprets from his abstraction, the idea, the feeling of the photographer, and the verses emerge”.

Each image is a kind of enigma, because behind them there is so much history and there is a country that is being deciphered every day.

From the mulatto woman who plays the saxophone in a very Cuban street, the ritual smoke that blindfolds a brunette, the Island that is drawn in a wave in front of the feet of Havana, the black boy and his basin, the eyes of the old woman –our old woman, our grandmother–, the flowers, the image of Che and the clock that marks the time in which they eternalized him, the clock over that photo of Che –damn 1:10 in the afternoon–, the flag and the palm, even myth and religion… Cuba is in all of that, in each one of those photographs, in each one of the poems tied to them in perfect harmony.

In the signature book of the exhibition, César Gómez wrote: “Your channels are still intact.” Chile continues to love “the light that extends its threads over the riverbed and takes root.” He is not wrong, I repeat, when he says that “if the heart does not fly, there is no poetry”. For Chile, poetry is expressing silence, and photography is “saying with lights and shadows, perpetuating and dreaming of life,” he says.

About his work, Eusebio Leal once wrote: “His images make up a universe of faith and spirituality, perceptible to those who, like him, are capable of love.”

I return to Víctor Casaus, to his poetry, because perhaps it contains the synthesis of this expo by Roberto Chile in which a photographic puzzle is latent. It is true. It is in each of the images. And one can perceive it. If you don’t see an Island from the first photograph to the last, from the last to the first, if you don’t see that alligator so ours, if you don’t feel it, please try again.

Some of the photographs of “Where Poetry Nests”

poets who accompanied with his work the images From Chile

Culture. Roberto Chile: “If the heart does not fly, there is no poetry” – Latin American Summary