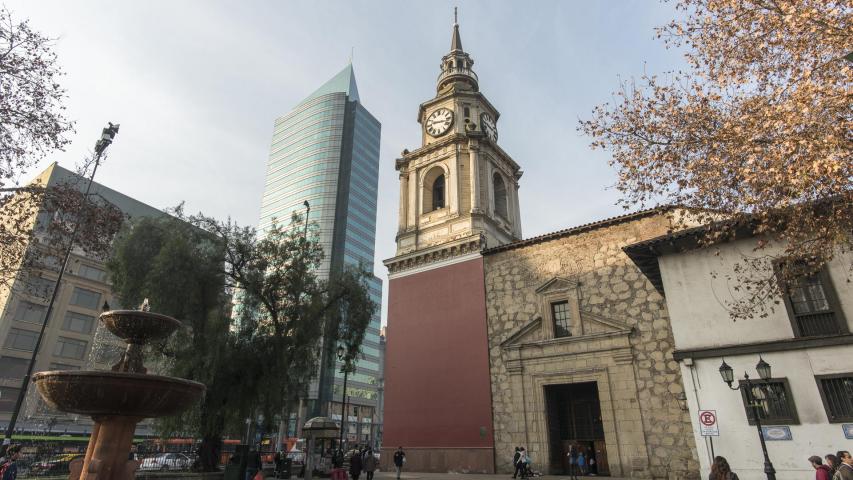 On October 23, the Jubilee Year and plenary indulgence began for all those who visit this oasis in the heart of the Chilean capital, whose first foundations are over 400 years old.

In the heart of the Alameda, in front of the emblematic “Huelén” or “Santa Lucía” hill, the “Convento de San Francisco” remains stoic, a work that has grown almost hand in hand with the foundation of Santiago and has witnessed the great advances of the city, as well as the social and cultural changes, also resisting numerous earthquakes that have shaken the country with force.

The graduate in Ecclesiastical History of the Franciscan Order, Friar John Rovegnorelates to flapping:

“It is Peter Valdivia who requests a plot of land to install the hermitage where to protect the Virgen del Socorro (Patroness of Santiago) who carried with him, from Spain.

Then he requests the presence of the Franciscan brothers, who come mainly to attend to the Spaniards and take charge of the brotherhoods, devotions and accompany the venerable III order of San Francisco.

A very small cloister of straw is formed, rather miserable, which over time spreads and leads to the construction of the temple in the first part and then the Convent, which is transformed into an Abbey, to which are added other sections that give rise to a large set of patios, cloisters and other spaces».

The Franciscan order decided to remain very close to the Chilean society of the time and established a relationship with all social classes, without distinction.. This is possible thanks to the decision to open the doors to everyone and allow entry to the temple and some rooms for meetings of various fraternities.

«This is how from its beginnings, there are stories of families and people who came to live spirituality up to the Convent. They came from a cook, a coachman, even aristocratic families and the Governor of the city himself, who are related in this Franciscan Fraternity, “says Fray Rovegno.

A refuge in the city

The Convent of San Francisco has been a place of refuge for thousands of people throughout its history, firstly because when passing through its doors, the noise of traffic, horns and the bustle of a capital disappear.

In the central patio, as part of the landscape, it is common to see how a Peacock displays its wonderful feathers of bright colors, while along the path a hen walks with her chicks and in the middle, a beautiful fountain is home to several colored fish. As expected, after four centuries, this place has undergone various changes in the ornamentation and landscape of its trees and plants, however, there is an element that remains over time and that is the immense peace that is inside it.

Brother Juan attests to this, who comments to flapping: «In full demonstrations that have been experienced in the city such as those of the Popular Unity, those of the military government, up to the most recent that we have had, hundreds of people have come to their doors asking for refuge to escape the violence and persecutions, seeking to find peace. Even, to protect the temple itself from various attacks, a series of barriers have been installed to protect it.

A space for everyone

Converted into a symbol of the history of Chile in these more than 400 years, the temple and the Convent continue to be a place of confluence for all social classes.

Tourists, people of faith, students, motivated mainly by the invaluable works that the museum contains (which give an account of the life of Saint Francis of Assisi) and hundreds of people in vulnerable situations who receive food in the museum, arrive daily. San Antonio dining roomnext to the temple.

«There have also been embassy receptions held in the cloisters, they have also passed through the facilities since the kings of Spain, Carlos and SofíaCommanders-in-Chief of the Region, to the Dalai Lama, to name a few,” says Rovegno.

To this is added that the place has been the venue for numerous activities such as: ceremonies of native peoples, prayers for Human Rights, signing of religious alliances and commemorations for the environment, just to name a few.

This is how at the beginning of the Jubilee Year and Plenary Indulgence that will last until October 23, 2023, the invitation to visit the Convent of San Francisco de la Alameda, is still more validvisiting each of the corners available to the public and soaking up history, in the middle of an oasis that invites reunion, reflection and peace, are a must for those who have the opportunity to reach Santiago.