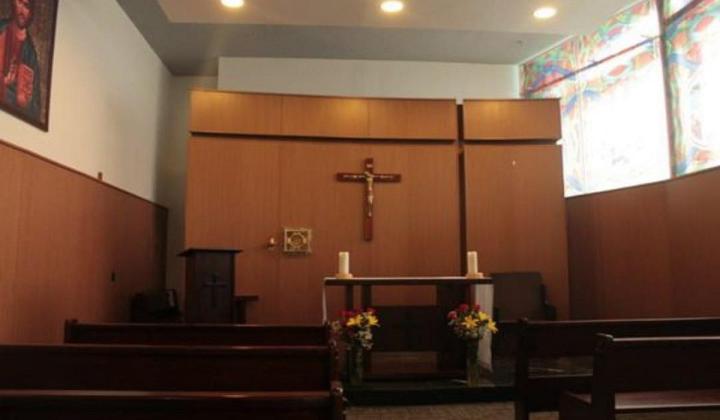 Faced with this unilateral decision by the company that manages the El Dorado airport, the Church says that secularization and materialism are taking steps to end the expressions of faith of a people

The small chapel that for decades served as a place of prayer for thousands of travelers of different nationalities was closed as a Catholic oratory and will become a place of reflection for various confessions.

According to Opaín, the private company that operates this international airport, the decision was made with the different beliefs of passengers passing through the terminal in mind: “We are adapting the oratory to be a space for neutral reflection, as it works in many airports around the world.”

However, Monsignor John Vincent Cordobabishop of Fontibon (one of the diocese of Bogotá), said that directors of El Dorado attributed the decision to a request made by the Secretary of Government of the Mayor’s Office of Bogotá«invoking the norm of the Ministry of the Interior about the equality of cults in Colombia».

For his part, the Secretary of the Government of Bogotá, Felipe Jiménez, clarified –according to the newspaper The viewer– that the decision to remove the Catholic ornamentation from the chapel was made directly by Opaíntaking into account legal actions undertaken by individuals who demanded access to the oratory for all religions.

The oratory, where the Virgin of Loreto – patron saint of aviators – was venerated, was open 24 hours a day, from Tuesday to Sunday, and a daily mass was celebrated there.

“They don’t let us evangelize”

Bishop Córdoba, in a statement to the media, blamed both the operator and the Mayor’s Office: “Both have to do with the departure of the Catholic Church from the airport, but Opaín and his board of directors could have left us.”

The chapel operated under an agreement between the diocese and the airport concessionaire, which was valid until 2037.

The Catholic ornaments and symbols were removed a few weeks ago and renovations are currently being carried out before opening the chapel. The company also confirmed that the daily Eucharist will continue to be celebrated at 11 in the morning, as is customary.

“We act in accordance with the law, but not before telling you that secularization and materialism are taking steps to put an end to the expressions of faith of a people who ask the Catholic Church to render them the service of God’s grace through the word and sacramentspointed out the Bishop of Fontibón.

the mayor, claudia lopezin statements to journalists, stated that, despite her Catholic status, she celebrates the decision because guarantees freedom of worship contemplated in the National Constitution.

On the other hand, the former senator of the Democratic Center Party Maria del Rosario Guerra expressed his rejection of this measure and pointed out that the mayor “persecutes the Catholic Church and its faithful and restricts religious freedom with its demand to remove the Catholic chapel that has been in the El Dorado airport for many years.”

Among Catholics there is great discontent, manifested mainly in social networks and in the homilies delivered by priests at the Eucharist. One of them, the father Ramon Zambranodirector of the catholic channel christvisionconsidered the following:

«Opening a multicultural room at the El Dorado airport only corresponds to a petty decision by Opaín. An irresponsible manager and a stingy board of directors must open more spaces to spirituality.

In the same sense, Father Walter de Jesús published this on his social networks: “Today they close this chapel for us out of respect for other religions disrespecting ours. If they need other places of worship, then let them build them. God save Colombia.

For his part, the renowned singer and preacher Philip Gomez He pointed out: “We Catholics welcome our brothers of different denominations, but that is not why we can sit shamans, sorcerers, ritualists or false teachers on the same platform with Jesus, the only true Lord, God and King.”

Regarding this controversy, the newspaper The viewer cites the 2021 Political Culture Survey prepared by the National Administrative Department of Statistics (state entity), in which it concludes that Christian doctrines in Colombia concentrate the majority of faithful. According to that document, Catholics in the country are the 78.2%; followed by Evangelicals, Pentecostals and Protestants, with 9%.