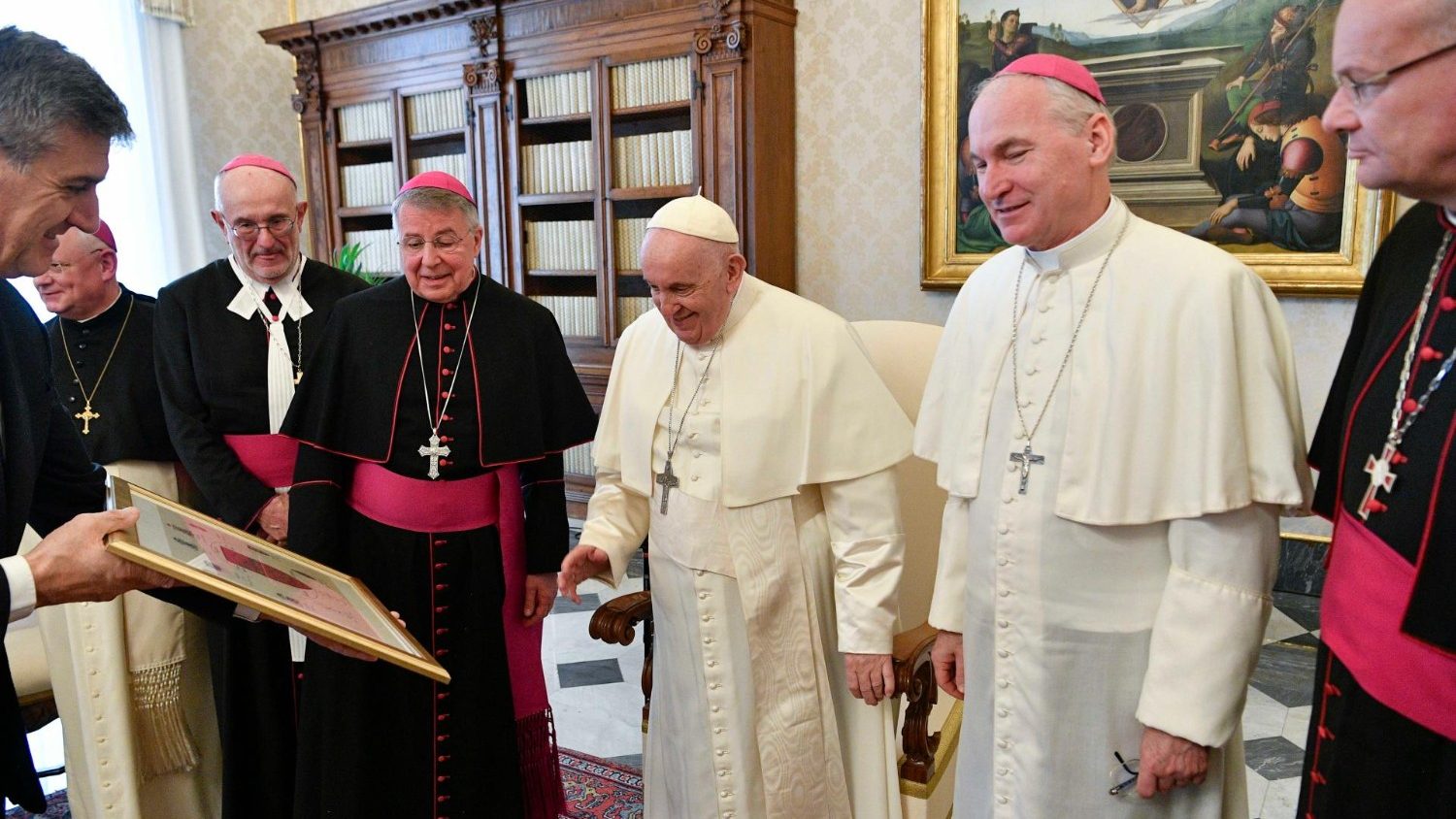 Pope Francis received eleven canons regular of Saint Augustine in an audience at the Vatican on Friday noon. A confederation founded in 1959 by Saint John XXIII. In his speech, the Sovereign Pontiff gave them a real plea for the consecrated life, encouraging them to seek God in Sacred Scripture, the liturgy, study, pastoral care, or even the realities of the time, if they are devoid of worldliness.

Pope Francis received eleven Canons Regular from Saint Augustine, a confederation created in 1959 by Saint John XXIII. Its main objectives are to unite the different branches of the Order in a bond of charity, to enhance the evangelical significance of your charism and to help each other, especially with regard to the spiritual dimension, the formation of young people, ongoing formation. and the promotion of culture.

“Although each congregation enjoys its own autonomy, this does not prevent the confederal statutes from providing for competences which favor a balance between this autonomy and an appropriate coordination which avoids, in any case, independence and isolation.“, stated the Holy Father, qualifying the isolation “dangerous“. The Bishop of Rome recalled the great care to be taken to protect oneself “against the disease of self-reference” and “to preserve the communion between the different congregations as a true treasure”. In effect, “you know very well that you are all in the same boat and that “no one builds the future by isolation or by their own strength, but by recognizing themselves in the truth of a communion always open to encounter, to dialogue, listening and helping each other» (Letter to all consecrated persons on the occasion of the Year of Consecrated LifeNovember 21, 2014, II, 3), Francis emphasized, advising to practice the spirituality of encounter, “essential for living synodality in the Church”.

In his address to the Union of Superiors General (USG), meeting in plenary assembly from November 23 to 25, Francis exhorts consecrated religious to be artisans of peace…

“Like any other form of consecrated life, yours too must adapt to the circumstances of the times, of the different places where you are present and of the cultures, always in the light of the Gospel and of your own charism”. According to Francis, consecrated life is “like water”, “if it does not flow, it rots, it loses its meaning, it is like salt which loses its taste, it becomes useless (cf. Mt 5,13)”. The good memory is fruitful, it is the memorydeuteronomic” roots, origins. Thus, recommends the Holy Father, we must not be satisfied “of an archaeological memory”, because it transforms us into museum pieces, perhaps worthy of admiration but not of imitation; on the contrary, assures Francis, the deuteronomic memory helps us to live the present fully and without fear in order to open ourselves to the future with renewed hope. “You too – as Saint John Paul II wrote – “you have a glorious story to remember and tell”, but above all you have “a great story to build”»he further emphasized.

Place Christ at the center

“Let the Gospel be your vade-mecum, so that, while remaining aloof from the temptation to reduce it to an ideology, it will always remain for you spirit and life. The Gospel constantly reminds us to place Christ at the center of our life and our mission. This brings us back to “first love”. And to love Christ means to love the Church, his body», continued the Successor of Peter.

It is in the Church, as Saint Augustine teaches us, that we discover the total Christ. God made us for Him and our hearts are restless until they rest in Him (cf. Saint Augustine, Confessions, 1.1). Therefore, as Canons Regular, “your main occupation is the constant and daily search for the Lord”, he enjoined them, encouraging them to seek the Lord in the assiduous reading of Sacred Scripture, in whose pages Christ and the Church resonate (cf. St. Augustine, Disc. 46, 33), in the liturgy, especially in the Eucharist, the summit of Christian life, which signifies and realizes the unity of the Church in the harmony of charity, in study and ordinary pastoral work, or even, the realities of our time, if they are devoid of all worldliness.

So many paths, which presuppose interiority, knowledge and love of the Lord, in the school of Saint Augustine: “Do not come out of yourself, constantly enter into yourself; the truth dwells in the inner man” (cf. By Vera Religione, 39.72; Confessions, 3.6.11).

The Pope received in audience the community of Claretians, on the occasion of the 50th anniversary of the foundation of their theological institute, on Monday 7 November. He invited them not…