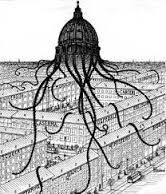 From today on newsstands the new issue of the monthly «Left» that the “shop” warmly recommends.

«The Catholic Assistance Lobby» by Carla Corsetti and Federico Tulli; «We discovered it on Facebook» by Lorenzo Fargnoli; “The hands of the bishops in our pockets” by Roberto Grandene; then three articles by Tulli: «Noi, ex nuns fled from a sect» and «Irene Calesini: out of the spiral of a patriarchal system» with an interview with Marco Marzano («Paedophilia, so the Italian Church absolves itself»; finally « There is no more religion” by Raffaele Carcano. On the 130 pages of the new, excellent “Left» (on newsstands at 15 euros) about forty move in the secrets of the Vatican. Which then often aren’t secrets but almost all the media, the supposed intellectuals and the right-center-ex-left political class are silent, confuse, sanctify or say the opposite of the truth. In the days in which the Italian State (never so secular but it can always get worse) decrees mourning for Ratzinger and confirms that «Caritas will manage on behalf of the INPS the disbursement of allowances and subsidies to 5 million elderly, poor and marginalized» the editorial staff of this small “shop” takes the liberty of telling you that the January «Left» is truly compulsory reading. EVEN FOR THOSE WHO BELIEVE but are not blinded by their need for spirituality to fall into the clutches of organized religions – more “temporal” than ever – rich in our money. 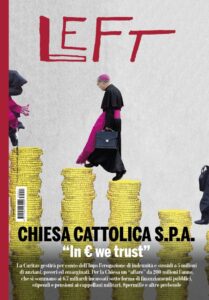 On Left January 2023 a new episode of the “Rupnik case” which, thanks to our early December scoop, has become worldly public. This time, using the reflections of the psychiatrist and psychotherapist Irene Calesini, we deal with the violence and abuse of power that have disrupted the lives of many nuns of the Loyola Community, some of whom were forced to flee “to escape sectarian dynamics”.
The Loyola Community is the same one in which in the 1990s the Jesuit religious, artist and theologian of international renown, Marko Rupnik, was accused of sexual violence and for this reason dismissed by the bishop of Ljubljana.

For 30 years until a month ago, the reason for the removal remained secret, in agreement with the Vatican, the leaders of the Society of Jesus and with the founder of the Loyola Community.

Would this be the transparency and zero tolerance invoked by Ratzinger and Bergoglio?

THE ARTICLE CONTINUES ON «LEFT».

Violence against women, violence against children, homicide, property crime and more. From 13 July 2022, the Left Database on cases of pedophilia in the Italian Church has expanded its range of action to other crimes, taking the name of ITALY SPOTLIGHTS. Permanent investigation into all crimes in the Catholic Church, the first of its kind in our country.

You can see it on the net.

While the Italian Bishops’ Conference investigates on its own, away from prying journalists, the pedophile crimes committed by “its” priests, Left the public inquiry continues and is accessible to all.

Faced with the data that we update every week, but not only because of these, we once again loudly ask Parliament to immediately set up a commission of inquiry into pedophilia in the Italian Catholic Church and to eliminate article 4.4 of the Concordat ( “Ecclesiastics are not required to give magistrates or other authorities information on persons or matters of which they have come to know by reason of their ministry”).

We consider the indifference on the part of the (secular) state for the psychophysical health of children who attend religious places and schools intolerable.

The editorial staff of the workshop is made up of Daniele Barbieri and whoever freely, freely and voluntarily contributes content, information and opinions.

Bergamo, at the Creberg «The last days of Van Gogh»
They gave him a wallet of sachets and he had a great idea
The story of the "Vera Cruz", the relic that waited centuries to return to Santa Fe
Tweet
Share
Share
Pin