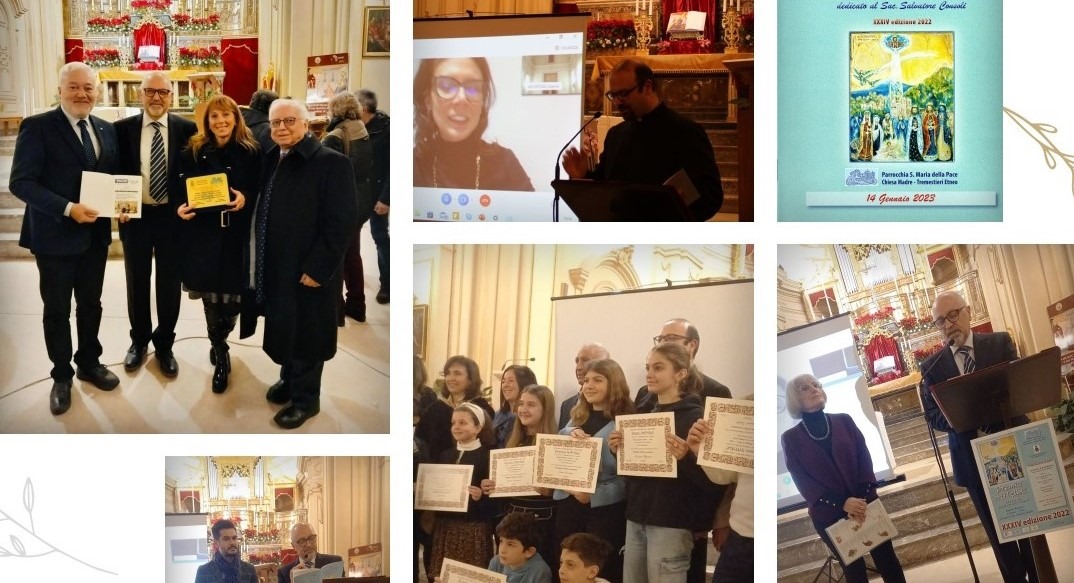 As always a precious appointment, which creates culture and nourishes virtuous paths of friendship and beauty in the sign of Christmas and poetry and the values ​​of peace, “oopportunity to meet and discuss, writes the parish priest Gaetano Sciuto in his greeting and presentation of the anthological notebook of the Prize, through various ways with the world of culture, which increasingly wishes to qualify as a real construction site where we can offer our contribution to increase the civilization of love”.

A meeting between generations, of primary and secondary school children and adults, between poets and journalists, teachers and parents that served as a frame, weaving relationships of knowledge and exchanges, between regions and territories of belonging: Tremestieri and the Etna hinterland , Catania, Messina, Cagliari and Teramo.

Guest of honor of the evening, animated by the “Improvisations” at the recently inaugurated parish organ of 1846, by maestro Andrea Strazzulla, the journalist and writer Sarah Donzuso from Catania, who spoke via skype and author of two books on friendships and gender-based violence and motherhoodForever and ever” And “Mom, my way”.

In the presence of the councilor for culture and tourism of the Municipality Vito Torrisi who brought the greetings of the mayor Santi Rando, impeded for health reasons and with the moderation of the secretary of the Vincenzo Caruso Prize, the awards were assigned with diplomas, parchments and plaques to the lyrics and drawings of the various sections of the Prize.

The interventions of the poets are very precious: Lucy Di Pietro, of Roseto degli Abruzzi in the province of Teramo, who won the first prize in section A in Italian with the opera “In front of that cave” who also recited some poems by the authors absent for reasons of health and bad weather;

Emanuele Stochino, of Quartu Sant’Elena in the province of Cagliari, winner of the Rino Giacone plaque (XXI edition) with the lyric “Freedom” which he read in Italian then interpreted, with particular intensity in Sardinian dialect, second prize ex aequo with the lyric “Peace is woman” of the poetess Caterina Jazira Famularo of Lampedusa (Ag), which was awarded the “Giovanna Finocchiaro Chimnirri” plate at its 20th edition; Maria Grazia Cali of Viagrande (Ct), with the poem “Maybe someday” in Italian and Melania Sciabò Vinci of Catania with the poem “While you sleep”, reported respectively in sections A in Italian and B in Sicilian.

First classified, however, in the Sicilian language section was the opera “Lu vol” of the poetess Antonina Pistorio of Gravina di Catania and awarded with mentions of merit in the Italian language section the lyrics “A crib in the city” Of Maria Carmela Mugnano of Rome andMay this always be firm in you” by Vincenzo Mirra of Pisa.

The jury of the sections of the A and B prize was made up of Giuseppe Adernò, Milly Bracciante, Lia Mauceri, Domenico Messina, Marco Pappalardo and Salvatore Scalia.

Among the winners also the journalist Mimma Cucinotta from Messina, managing director of the European online information magazine CountryItalypress.it. who was awarded the “Salvo Nibali” plaque for the XI edition dedicated to the journalist from Catania who died on 27 December 2005.

The award was presented by Giuseppe Adernò, president of the Catania provincial section of the Catholic Union of the Italian Press (UCSI), an organization operating in close synergy with the event which saw the authoritative presence of the regional president of UCSI Domenico Interdonato.

The Maltese Way, the Camino de Santiago also passes through Malta
The Catholic ties of Princess Diana
In Paris, interreligious ceremony and action against the Total project in Uganda
Tweet
Share
Share
Pin