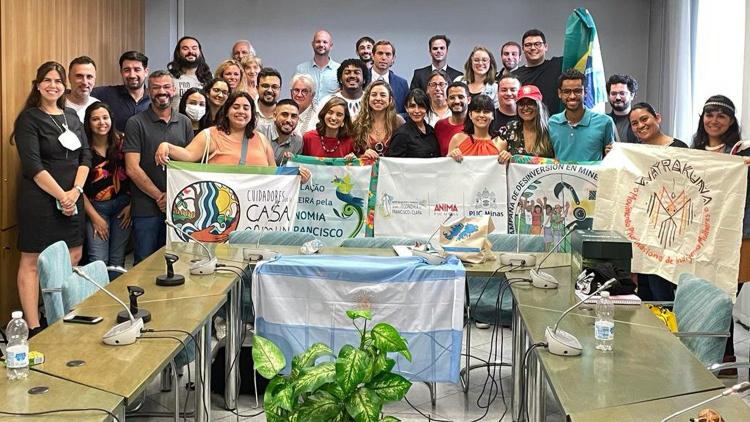 Argentine youth referents of this movement were with the Pope in Assisi, recounted their experience and yearned for the recognition of the “popular economy” as a transforming axis.

Youth leaders from the Carers of the Common Home Movement recently participated in the “Economy of Francis” meeting in Assisi (Italy), where the Pope encouraged them to “change the current economy and give a soul to the economy of tomorrow” and where young economists , businessmen and entrepreneurs signed a pact for the care of creation.

“The economy is a tool at the service of people, especially in the face of the biggest pandemic that is social disintegration and, precisely, Francisco’s economy seeks to act under three elements: economic concentration; regulation of the financial system and sustainability”, said Facundo Pascutto, 35 years old, from the National University of Lomas de Zamora and part of the “Cien Asís” project in Argentina.

“Fundamental is the dialogue between the different social sectors to be able to transform the current economic crisis into something hopeful,” he said in statements to Aleteiaand assured: “The ‘technique’ (the numbers) serve as a framework but they are nothing, without the ‘social consensus’. Such a simple and humane formula is to rediscover the other.”

Pascutto acknowledged that “we all like to consume”, but recalled that in order to save our common home and change our lifestyles, it is “necessary to bring business and political leadership into dialogue”, so that consumption “takes into account the poor and work for the common good. As long as there is community organization, adversities, economic crises can be overcome”.

Iván Cabrera, also 35 years old, a tourism entrepreneur in Ushuaia (Tierra del Fuego), stated: “Contemplation of the human, business and natural ecosystem is a task that we want to carry out together with those who are outside the system so that the revenues taken from the natural environment serve the communities”. The goal is to transform an economy that dehumanizes and does not respond to the needs of our peoples.”

As an example, Cabrera mentioned the problem of the exploitation of lithium and other minerals that damage the environment. “Ecotourism is an alternative that we are developing, not only in Tierra del Fuego, but throughout Argentina and we hope perhaps in Latin America,” he stressed, adding: “Tourism that serves to generate a positive impact, sustainable over time and for the benefit of all.”

The young Argentine hopes that the “interreligious, universal and inclusive vision” of Francisco’s Economy will be a “movement that lasts over time.”

“I bring the dream that the popular economy is recognized,” said Milagros Lugones, a member of the Social Movement Carers of the Common Home, present in 17 provinces and of which more than 5,000 people are a part. An organization that was born in 2015 in response to the encyclical praise yes.

“Francisco tells us about a crisis, not only environmental, but social, a crisis that cannot be separated. We have to stop the culture of discarding. We are not throwing garbage, we are throwing people, especially women and young people,” said the young woman. 26 years old.

After the economic crisis and neoliberal policies, the Social Movement of the Common Home, says Lugones, dedicated itself to three specific lines of action: “spirituality, accompaniment and decent work.”

Also, he affirmed, “we work with several axes: renewable energy, ecotourism, cultivating the land, recycling, respect for traditions; and rediscover trades resulting from the experience of our ancestors that create work, comprehensive training.”

“I can’t build my personal dreams, without considering that my colleagues don’t make it to the end of the month, we must build together,” he explained, and stated: “I celebrate their achievements, as if they were mine.”

“In the axis of ‘comprehensive training’ we put our knowledge and experiences in communion to do something new and for the benefit of all”, concluded Lugones. +

Caretakers of the Common Home at the meeting