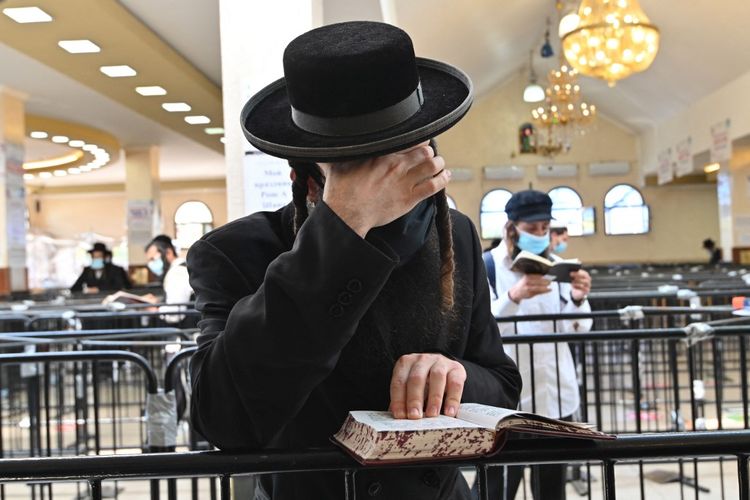 After the coronavirus pandemic, it is now the shadow of war that hangs over the pilgrimage of Uman. In light of the risks involved, Ukrainian and Israeli authorities have called with one voice on Jewish pilgrims not to travel to the city in eastern Ukraine on the occasion of Rosh Hashanah.

Uman Mayor Iryna Pletnyova stressed that the locality lacked the capacity to provide protection for tens of thousands of visitors, while the Israeli Foreign Ministry insisted that those who go to Uman will in danger, and Israel may not be able to help them if things go wrong. Even Moshe Azman, a prominent Kyiv-based rabbi, spoke on Israel Radio to advise worshipers not to go there. “I’m afraid there will be provocations. Who will take responsibility for people’s lives?” he said.

In Ouman, come what may

Only “the Jewish people are stiff-necked” as the Torah says, they are stubborn. It takes a lot more than a nasty virus or even a war to dissuade him from going to pray to his saints. During the pandemic, thousands of pilgrims traveled to Uman, defying all health restrictions. Even if it means dressing up or shaving their beards, as many have done, to pass the controls and not be spotted.

This year, pilgrims from most of Israel have once again flocked to Uman to spend Rosh Hashanah there, regardless of the conflict. From 10,000 expected, they would even be double on site according to some organizers (against 30,000 in regular years).

“Those who are here this year are mostly seasoned Breslev Hasidim, used to making the pilgrimage. People who have never come to Uman have been deterred by the security situation,” said Aaron Chetrit, leader of the association. Ayeh who organizes trips to the city of Ukraine.

Nothing could have dissuaded them from respecting the will of Nachman of Breslev – an 18th century rabbinic leader and founder of the eponymous Hasidic movement – who had expressly asked his disciples to pray at his tomb during the Jewish New Year, which traditionally marks the anniversary of the creation of mankind. Nothing, except a real danger of death (“pikouah nefech” in Hebrew), to which the Torah forbids exposing oneself, they point out. But according to them, none of this at present in Uman.

“In his writings, Rabbi Nachman explicitly refers to ‘lack of money or war’ as ‘barriers’ to pilgrimage, but not as limits to it. Unless, of course, there is a real risk for the life of the person,” says Aaron Chetrit.

Almost nothing to report

All the pilgrims there assure us: apart from the curfew imposed in the city from 11 p.m. to 5 a.m., Uman bears no sign or stigma of the ongoing war. There are alarms from time to time, but these are general to all cities. And the bombardments take place several hundred kilometers away.

“The atmosphere is beautiful and joyful, everything is going well,” says Moché Atlani, a young pilgrim from Tel Aviv. “There is no trace of a bombardment, or even of a firecracker.”

The war, these faithful Breslev have especially felt it in the journey in the form of a journey that they had to make to arrive as far as Ouman. The Israelis took a plane from Tel Aviv to Poland, Romania or Moldova, then a taxi or a bus to the Ukrainian border, and yet another to Uman. The hardest part being the endless waiting at the borders, well beyond the verification of passports and the usual formalities. Some buses carrying pilgrims even remained blocked for hours at the entrance to the country, forcing passengers to spend the night in the vehicle.

But what makes these faithful walk, considered even in Israel as reckless and irresponsible? “The emuna”, explains Aaron Chetrit, “trust in God and in the tzaddik. It is clear that if we had to base our decision to go to Uman on purely rational considerations, we would never have come. This is why we can understand those who watch the news and who consider our approach completely reckless.”

Does he think, as some say, that Putin might try to hit Ouman during the pilgrimage, just to make an impression?

“We can indeed say that Putin will attack, but that remains hypothetical. In the same way as in Israel, we live under the threat of Hezbollah missiles and Hamas rockets, which can target civilians at any time. But that doesn’t stop people from continuing to live in Sderot, on the edge of Gaza, or in Ashkelon, not far away. We can live in fear, but we choose to live in emuna,” says -he.

Same considerations for Moche Atlani, who chose to go to Ouman ignoring what his parents advised him. “I already wanted to make this pilgrimage for Shavuot, last June, but my parents dissuaded me because of the war. Then over the months, we saw people making several round trips to Uman and certify to us that there was no problem there. So I decided to trust what they were saying”, he says, congratulating himself for not having “fallen into the trap” of the information and warnings of all kinds.

Benyamin, a regular on the pilgrimage he has been making for 20 years, goes so far as to affirm “that it is better to be in Uman at the moment than in Judea and Samaria”. And points out that Rabbi Nachman asked his followers to be both “reasonable and bold,” which he takes as an encouragement to visit the city of Ukraine even in these troubled times. He refutes the allegations that Russia could take advantage of the pilgrimage to target the city.

“Uman is a central crossroads between kyiv and Odessa, where a lot of refugees pass through. It would be impossible for Russia to bomb a place where there are so many civilians,” he said.

“Furthermore, Putin needs Israel right now. He cannot afford to alienate the country because with its gas reserves, the Jewish state could decide to raise or lower prices at its whatever,” he says again.

Are the presumed dangers of the pilgrimage to Uman therefore a matter of hoax?

“There is obviously a potential danger, as in any country at war. That said, the Ukrainian authorities have a double standard: they cover themselves by warning and calling for everyone’s responsibility as they have a duty, but on the other hand they know that the pilgrimage is important for the local economy, so they don’t put more pressure than that to prevent people from going to Uman”, notes Aaron Chetrit.

The leader of the Ayeh association, which aims to spread the teaching of Rabbi Nachman, concludes by explaining that the most terrible war of the time is “the spiritual war against the forces of evil”. “Among the people who go to Uman, there are some who live a real hell on Earth because they cannot have children after ten or fifteen years of marriage, or because they are in perpetual conflict with their spouse. Making this pilgrimage concretizes for them a hope of peace and blessing, of which they would not deprive themselves for anything in the world.”

In Ouman these days, floats a strong perfume of spirituality tinged with a feeling of heroism. We look at each other knowingly, proud to be among those who place themselves above the trivial laws of nature, war and bombs.

Breslov and Uman: a passionate relationship that defies war – I24NEWS