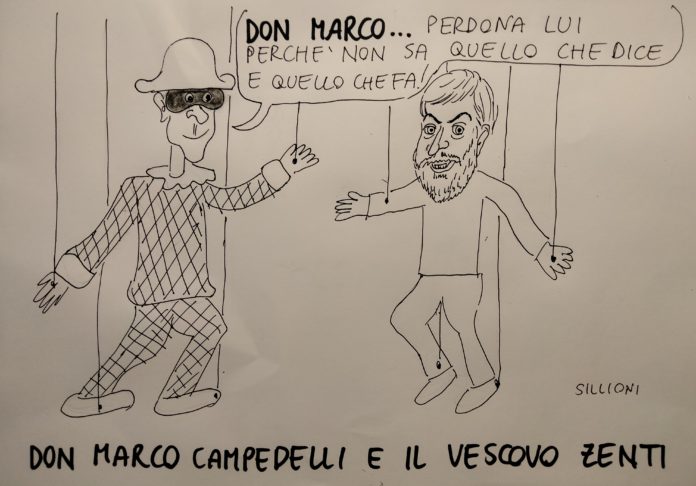 I learn from Adista, and then directly from the interested party to whom I asked for confirmation, that the bishop of Verona dismissed Marco Campedelli from the post of professor of religion at the Liceo Maffei in Verona, held by Campedelli for 22 years.
A few simple questions and some observations.

1) Who are the two protagonists?
The bishop is Msgr. Zenti, known for his conservative positions and above all for having openly invited the clergy and the faithful several times to vote for center-right political groups. The last time took place a few days ago, before the second round for the election of the mayor of Verona, won, as is known, by the center-left candidate Damiano Tommasi.
The dismissed professor is Marco Campedelli, former parish priest for 18 years in the center of Verona, theologian and also a showman being an expert puppeteer who, with his theater, produces an excellent narrative theology and a spirituality that makes you smile, think and some time to move.

2) How to explain what happened?
Simply like this: A) the bishop had expressed his voting indications in favor of the center-right; B) Campedelli had opposed both in the seat of the council of theologians and publicly through a paper published by Adista who had made the tour of the city; C) the elections ended with the victory of the unwelcome candidate to Zenti, the “dangerous” Tommasi, who can be defined as an “adult Catholic” to take up the definition that Prodi gave of himself at the time and that shocked Cardinal Ruini a lot; D) Zenti took his revenge, or perhaps better, revenge.

3) What to think politically of what happened?
What happened first of all concerns the relationship between the Church and politics. In this regard, it is sufficient to say that Msgr. Zenti is the exponent of that outdated conception of the world that Pope Francis insistently deplores calling it “clericalism”. Clericalism is the conception of the clergy as power, as absolute power, to which even political power must submit over certain things. In short, Gregory VII, Boniface VIII, Pius IX, card. Ruini et cetera, as regards the history of the Church. In other parts of the world this is called “theocracy”: think, for example, of the Taliban, ayatollahs, religious parties of the Israeli right, Hindutva of Modi in India. Trump and him, of course, also join this team.

5) What to think culturally about what happened?
What has happened concerns our schools, our culture. It is not permissible for a “bishop” to dismiss a professor from a state high school who has been teaching for 22 years with the human and professional satisfaction of students known throughout the city. It is not permissible! at least he is not in a state like ours.
It follows that what has happened must be an opportunity to totally rethink the teaching of religion in our schools, removing it from the hands of the Church (which today has total power over programs and teachers) and handing it, like all other disciplines, to the State. and the specific skills it will use. As is the case with philosophy, music, art, literature and any other subject. Today religion, indeed religions, are an essential geopolitical factor for understanding our world (Islamic terrorism, the Palestinian question, India-Pakistan tensions, American Bible Belt, Patriarch Kirill and Putin …) and the way in which the religious matter is daily offended by the logic of power that has nothing to do with the nobility and topicality of the discipline itself. Msgr.Zenti has only given an example of the despotic power that the State grants to the episcopate and which, in my opinion, must no longer be tolerated: for the good of religion and above all of the critical and informed consciences of our children who need it. to understand the world.

I leave out the question of what to think “humanly” of what happened because it would be merciless for Msgr. Zenti, now resigned bishop to whom I wish to find peace, intellectual honesty and above all love, because without this human life is a failure, especially for those who have dedicated their lives to love and the announcement of him .
Instead, I would like that a serious reflection on the teaching of religion in our schools could start from here. And above all I would like everyone to gather around Marco Campedelli, showing him our esteem for the freedom and courage shown and solidarity for the injustice suffered.

Bishop Zenti retires tomorrow. In recent times he has created chaos in the diocese (V. Mancuso and A. Sillioni) -FarodiRoma