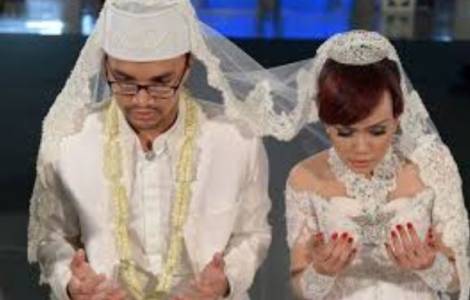 ASIA – Spouses with different faiths: a growing phenomenon, an opportunity for dialogue and love

Bangkok (Agenzia Fides) – Interreligious marriage is a complex reality and is a growing phenomenon in Asia. It should not be demonized, but requires specific pastoral attention, as it represents an opportunity for a dialogue of words, love and life. This is what the Movimento per la Famiglia Cristiana (Christian Family Movement) affirms, a network of small family groups which, focusing on the Gospel of Jesus Christ, live the spirituality of the couple and family life in Asian countries such as India and the Philippines (where was started in 1956) and then in many other countries of the continent. At the movement’s recent Asian convention, held at the Diocesan Pastoral Center in Bangkok, in the presence of over 100 delegates from Cambodia, India, Indonesia, Laos, Malaysia, Myanmar, the Philippines, Singapore, Sri Lanka, Thailand and Vietnam, the focus on interreligious dialogue within family life, with a reflection that, considering Asian pluralistic societies, aimed at understanding how to build bridges with people and communities of other religions, starting from family life.
What in the parlance of the Catholic Church are called “mixed marriages” (between a Catholic spouse and a baptized non-Catholic) or marriages “with unequal worship” (between a Catholic spouse and one who follows another religious belief) are considered “given opportunities by the Holy Spirit for a humble, respectful but always eloquent witness of the Christian faith”. By discovering and living the Christian foundations of interreligious dialogue: in tradition, Scripture and Church documents, families born from mixed marriages or with differences in worship can “build respect and mutual understanding between spouses of different faiths, live and make the mission of the Christian family in Asia”.
The congress noted that the growing phenomenon of marriages between Catholic faithful and people of other faiths represents a delicate issue. In Bangladesh, interreligious marriages with a Catholic spouse are about 12% of the total, and the figure is similar in Pakistan, where there is also the phenomenon of “forced marriage” with the kidnapping of Christian girls. The trend is very high in Sri Lanka, where 70% of weddings that take place in the diocese of Galle, for example, are between Catholics and Buddhists. In other contexts, such as Myanmar, marriages between Buddhists, Christians and Muslims are still taboo for cultural reasons.
Fr Michael Peters, an Indian theologian who has studied mixed marriages in various dioceses of southern India, confirmed that “such marriages are constantly growing in India” and that the Indian Church “is open to accompanying couples in this situation” .
According to the Missionaries of the Precious Blood, on an anthropological and sociological level, the trend is the result of the technological revolution which in recent years has generated drastic changes in the way young people build their interpersonal relationships and also those of couples. The new technological tools contribute decisively to the growth of mixed marriages and with unequal worship in Asian countries. Furthermore, in pluralistic societies, working environments are created which bring together thousands of young people from different backgrounds and which allows them to interact. “In this scenario, young people fall in love, and religion and faith matter less,” notes Peters. While these couples bring “great wealth to the Church”, they also pose difficulties, especially in countries where religious affiliation has civil law implications. In India, for example, different religions have their own laws and customs governing matters relating to family life, such as marriage, divorce and inheritance.
If in the past the Churches in Asia discouraged mixed marriages, now such relationships are generally permitted, with a dispensation given by the Bishop – as foreseen by Canon Law – on condition that the couples agree to raise their children according to the Catholic faith and that the Catholic spouse can continue to practice the faith. Often, the biggest obstacle to intermarriage or unequal worship is the couple’s parents and relatives who are not open to this type of marriage.
The priest or parish priest – it was noted in the convention – are called to give specific pastoral assistance to families of marriages with differences in worship, because sometimes there are cases in which the unbaptized spouse refuses the conditions of the Church for celebrating marriages and refuses to have the children baptized. Or some unbaptized partners agree to terms initially, only to reject them after marriage. Furthermore, if the Catholic spouse is a woman, the possibilities of raising her children according to her faith are slim, especially in India and other countries where society has a patriarchal structure.
How, then, will that spouse and the entire Catholic community deal with a situation if the child follows the religion of the unbaptized partner? For this reason, the Movement for the Christian Family has noted the need and reaffirmed its commitment in accompanying spouses with post-marital meetings, helping the Catholic partner of a marriage with an unequal cult to continue practicing the faith, and helping couples to build their bonds and live with mutual respect and love. Parishes and local communities, it was hoped, should invite couples for “fraternal meetings”, listen to them and help them in any problems. The Asian convention expressed the desire that the diocesan family commissions, in the various nations, develop ways and means of taking care of such families, supporting spouses in understanding each other, in respecting each other’s freedom, in understanding and welcoming moral values ​​in their respective traditions.
The phenomenon of mixed marriage and co-cult disparities in Asia – it has been observed – is part of the general crisis affecting the institution of marriage also in the Asian continent. In Thailand, 40% of marriages end in divorce, and for young Catholics, very rarely does a Catholic share the same faith with a partner. Since 2005, according to data from the United Nations Demographic Yearbook, the overall divorce rate has increased in most Asia-Pacific countries, and by an average of about 25% across the region.
(PA) (Agenzia Fides 22/11/2022)

ASIA – Spouses with different faiths: a growing phenomenon, an opportunity for dialogue and love