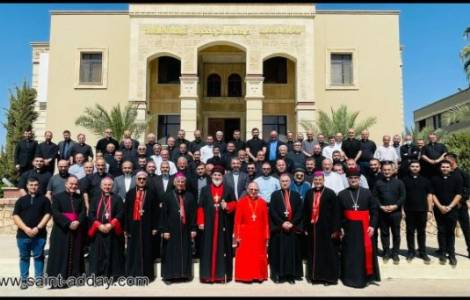 Ankawa (Agenzia Fides) – Exactly one year after his patriarchal election, Mar Awa III, Patriarch of the Assyrian Church of the East, was the guest of honor at the lunch organized at the end of the spiritual exercises which took place from 5 to 8 September they saw the participation of more than eighty bishops and priests of the Chaldean Church. Spiritual exercises and a final lunch were held in Ankawa, a predominantly Christian suburb of Erbil, the capital of the Autonomous Region of Iraqi Kurdistan. Cardinal Louis Raphael Sako, Patriarch of the Chaldean Church, who welcomed the Assyrian Patriarch and the delegation accompanying him, expressed the invitation to Mar Awa, hoping for a strengthening of the bonds of communion between the two Churches, for the good of Christians and of the whole Iraqi people.
Mar Awa, born David Royel, was elected 122nd Patriarch of the Assyrian Church of the East on 8 September 2021, succeeding Patriarch Mar Gewargis III Sliwa. As previously reported by Agenzia Fides (see Fides 22/10/2021), Mar Awa comes from the USA and studied in Catholic academies, including the Pontifical Oriental Institute in Rome.
The Assyrian Church of the East has never had direct dogmatic conflicts with the Bishop of Rome. The official theological dialogue between the Catholic Church and the Assyrian Church of the East was initiated in 1984, and led to the 1994 Joint Christological Declaration, which confessed the faith in Christ shared between Catholics and Assyrians. Now, this fraternal theological dialogue is continuing on the theme of the sacraments and the sacramental nature of the Church. Since 2001 the Assyrian Church of the East has authorized experiences of Eucharistic hospitality with the Chaldean Church, in pastoral situations that require it.
The theology and spirituality of the Assyrian and Chaldean Churches strongly emphasize the human nature of Christ.
In September 2013 Louis Raphael Sako, who had just become Patriarch of the Chaldean Church, had addressed an official invitation to the then Assyrian Patriarch Mar Dinkha IV to begin together a journey of dialogue to restore full ecclesial communion between the Chaldean Christian community – united with the Bishop of Rome – and the Assyrian, who share the same liturgical, theological and spiritual patrimony.
The Jordanian priest Hanna Kildani, former Vicar for Israel of the Latin Patriarchate of Jerusalem, preached the spiritual exercises for the Chaldean clergy. (GV) (Agenzia Fides 9/9/2022).