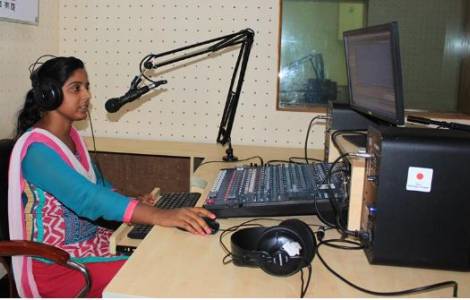 Dhaka (Agenzia Fides) – Radio is a precious medium to announce the Gospel in Bangladesh. This is confirmed by the Bengali service of “Radio Veritas Asia” (RVA), which recently promoted a meeting with its listeners in the capital, Dhaka. The meeting, and surveys conducted in recent months, have revealed that 95% of RVA listeners are non-Christians. The participants in the Dhaka conference, from different confessions and ethnicities, testified that they enjoy listening to Catholic radio, in addition to expressing their gratitude and confirming that they see a positive impact on their lives.
“Since my childhood I have listened to the Bengali service of Radio Veritas Asia. I especially like a program called ‘Chatona’, which means ‘Awareness’. The voice of Radio Veritas Asia has enlightened me and my family,” says Didarul Iqbal, a Muslim listener from the city of Chattogram. With its debate program “Chatona”, the station addresses and debates prejudices and social discrimination. “Radio has helped me along the path of human and professional growth”, he affirms.
Asif Iqbal, another regular Rajshahi listener, says he has been listening to Radio Veritas since 2001. “Through various programmes, the RVA has given me messages that I have always appreciated. I can say that RVA is the craftsman of my life. I feel like a full member of the RVA family”.
Another listener, Firoja Akter, tells Agenzia Fides that she has received valuable vital advice from Catholic radio: “Once I listened to a program on the theme of development and the autonomy of women. She talked about small economic initiatives, like raising chickens. That program inspired me and that’s how I started a small business that allows me to live today”.
The coordinator of the Bengali service of Radio Veritas Asia in Bangladesh, Father Augustine Bulbul Rebeiro, confirms that “RVA is committed to expressing the truth, charity, mercy and dignity of the person, which is the Gospel of Jesus”. And he affirms that this will continue in the future: “We remember with gratitude all those who have contributed to establish and continue the mission of RVA in Bengali. We will continue to preach the truth.”
Cardinal Patrick D’Rozario CSC also spoke at the meeting with listeners, underlining that “the RVA is the voice of Asian Christianity” and recalling that the station began broadcasting programs in the Bengali language on December 1, 1980. “In Bangladesh – observes the Cardinal – the majority of RVA listeners profess Islam. Our radio is helping to create an awareness, a mentality and a culture in our country. It functions as the voice of the voiceless”.
After broadcasting on shortwave radio until 2018, RVA moved to digital multimedia platforms. Today it is the voice of the Church in Asia and promotes dialogue on issues of religion, culture, spirituality and current affairs. Radio Veritas Asia, based in Manila, was born in 1969 as a continental Catholic station serving Asian countries in their local languages. Today he proclaims the Good News through websites, podcasts, and social media platforms in English and 22 Asian languages. In 1974, the Federation of Asian Bishops’ Conferences (FABC) assumed full responsibility for the station, making it a joint project of the Church in Asia under the auspices of the FABC Office of Social Communication.
(PA-FC) (Agenzia Fides, 11/1/2023)

Congregation of Missionaries of Maria Dolorosa celebrates 75 years
The campaign "The dollar of solidarity" has already begun to build 100 houses in Elías Piña
Meaning of Yoruba, the religion practiced by Niurka Marcos
Tweet
Share
Share
Pin